Who will be the lead running back? How good will Wentz be? And much more... 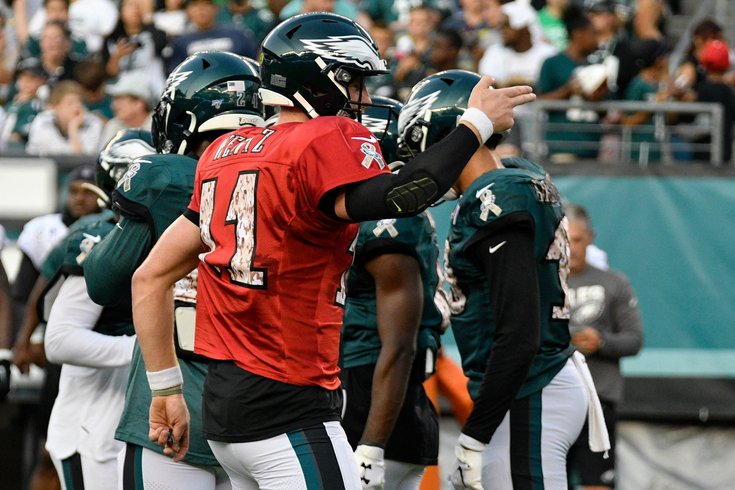 Are you a fantasy football homer?

It's draft season and it's sometimes hard to fight the temptation to overdraft players on your favorite teams. A lot of fantasy drafters do it without intention, and we are here to help.

We took a look at five important questions about the 2019 Eagles as they pertain to fantasy football this year. Take a look below to help gauge your valuing of Philly players — or if you're an Eagles hater (or indifferent), take a look at some helpful information regarding some important players this season.

Will Miles Sanders be the featured back?

When the Eagles drafted Miles Sanders in the second round of this past draft, it was hard to envision them not playing him, you know, a lot after making such a big investment.

Prior to the draft, the team went out and signed Jordan Howard as well, with Corey Clement returning from injury and Darren Sproles later coming out of retirement to rejoin the Eagles. The Birds also have Josh Adams and Wendell Smallwood fighting for spots on the 53-man roster. It's a lot of mouths to feed, some of whom will find themselves out of a job next week.

Complicating things is the coaching style of Doug Pederson and running backs coach Duce Staley, who likes to change it up and go with the hot hand. There is no guarantee Sanders will lead the team in carries — but the suspicion seems to be that he has a very good chance to.

Sanders showed a lot of promise in training camp, prompting the following response to a question in Jimmy Kempski's latest Eagles chat:

Well, you've barely seen him, ha. And for good reason. The team obviously values him and wants him to be fresh for the regular season. Without looking, does he even have 10 carries? Some of the carries he has had were nice, and I've been encouraged about the limited glimpses we've seen of his pass protection. Trust me. When the regular season begins, you'll see pretty quickly that he is the best Eagles back, and again, I don't think it's even that close.

Jimmy and nearly every other Eagles writer has been mesmerized by Sanders this offseason and it is clear he has the talent to be the go-to guy at some point this season. Drafting him in the 4th round may be a stretch, but in rounds 5-7, he is a great pick up.

Will Dallas Goedert play enough to be draftable?

Last season, the Eagles No. 2 tight end (who says he thinks he could be the No. 1 on 29 other NFL teams) was incredibly effective during the limited reps he got on the field. This year, he's ranked as the No. 21 tight end in fantasy. Which is actually pretty impressive, considering he's "backing up" Zach Ertz.

But not really. With the Eagles running more and more 12 personnel (two tight end sets) this preseason, Goedert will act as more than a replacement for when Ertz is off the field. In 2018, he caught 33 passes on 42 targets for 334 yards and four touchdowns. That's 90.4 points in PPR last year — 20th of all tight ends.

The worst case scenario is for Goedert to replicate these numbers, though it is likely he will see an uptick of targets with a year under his belt in the Philly offense. He is borderline draftable, but could end up being a very valuable waiver pickup as the season goes on if your team needs a boost at TE.

Will Carson Wentz play like the 2017 version of himself?

There isn't a long track record or history for Wentz aside from two season-ending injuries and a whole lot of potential.

Wentz is among the top fantasy quarterback candidates this year — he is ranked as QB6 or QB7 in most fantasy rankings. The question is, will he post MVP-type numbers like he did during the Eagles Super Bowl campaign in 2017?

Here's a look at some helpful facts and figures:

Wentz appears to be fully healthy and has as talented weapons as he ever has in his career. It might be a bit of an ask to expect Wentz to be an MVP in 2019, but it's also reasonable to expect him to — if healthy (a big if ) — post Top 5 fantasy quarterback numbers.

A safe expectation is for him to post production somewhere in the middle, between his ridiculous 2017 season (where he had the third most fantasy points despite missing five games), and his 2018 season prior to his back injury.

How many targets will DeSean Jackson get?

This question has a hazy answer, since we have no recent truly relevant data to break down. In Tampa, Jackson had 774 yards on 41 catches and four touchdowns. With Wentz thus far in training camp, the two have connected quite a bit down the field with Jackson flashing the same speed he's always had.

But he is 32 years old, hasn't played 16 games in a season since 2013 and will need to share the ball with two high-powered tight ends, as well as Alshon Jeffery, Nelson Agholor, and JJ Arcega-Whiteside.

Jackson is valued most places in the WR38 range which is probably right. He's not the kind of player who has a floor of expected stats every game. He is more of a big play guy who will produce, but not consistently. Still, he's worth a selection in the 9-12th rounds.

Is the Eagles defense worth drafting?

No one really seems to have any idea where to draft defenses. Take a look at 10 rankings we found:

Last year the Eagles finished 30th of 32 defense/special teams units in terms of fantasy value. They didn't have a single defensive touchdown and created just 17 turnovers — though they did sack the quarterback 43 times, a top 10 number.

The average of the rankings above is 14.6, putting them outside of a 12 team league's drafted players. The Birds D/ST might be a good streaming unit and one with potential to be a mainstay every-week unit.