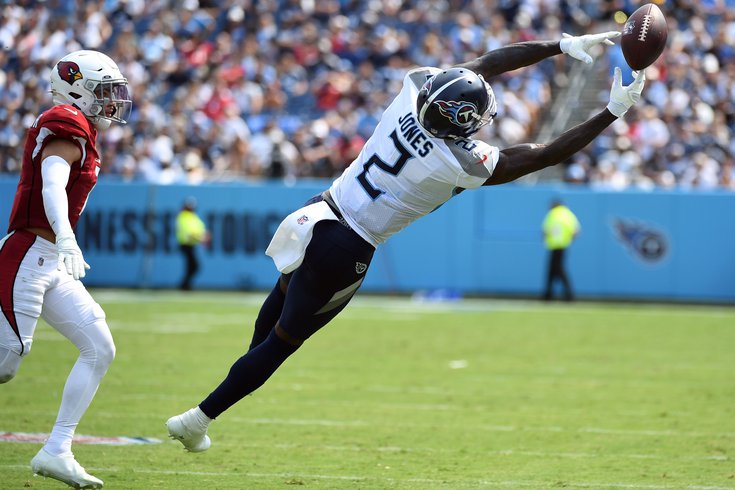 Julio Jones is due for a bounce back in Week 2.

Every week, we dive deep into the matchups we like the most heading into the fantasy slate to help you determine whether a borderline player is worthy of being in your starting lineup or not.

This week is no different, as we've selected a guy at each position we would recommend starting, as well as sitting in Week 2. Keep in mind we are not going to waste your time on the obvious — Alvin Kamara and Josh Allen should be starting if they're on your roster.... duh.

Here's a look at some iffy guys and what we think:

In kind of a sleeper of a Week 1, Bridgewater threw for 264 yards, two touchdowns and zero turnovers in his team's win over the Giants. The schedule remain soft for Denver, as they face a Jaguars squad that allowed the Texans to post 27 fantasy points with their QB Tyrod Taylor. Bridgewater is the best of the bad options in Week 2.

Big Ben failed to eclipse 200 yards passing in Week 1 and was more of a game manager, as the defense is the reason the Steelers upset the Bills. With the much softer offense of the Raiders on the docket for their second game, there should be a better performance in the cards for the veteran quarterback. Should be. Every QB (who isn't Tom Brady) eventually falls off a cliff around Roethlisberger's age. It would be smart to sit back and make sure he still has it before you fire him up as a starter.

Yes, we are picking on the Jaguars — why aren't you? This matchup which on the surface is a backup running back actually sees Williams — who had more carries than Melvin Gordon III in Week 1 — as a playable option against the bad Jags defense. If he out-touches Gorgon again he should be able to generate more than just 4.6 fantasy points. With a lead in this one, Denver could be running the clock out in the second half and that would be Williams' time to shine.

There are a few reasons we are uneasy about Mitchell, who you just won on your fantasy football waiver wire. For one, the Eagles defense was pretty good against the run in Week 1 — but more than that, with Raheem Mostert recently added to the IR, the pecking order in San Francisco is completely unclear. Will Mitchell be out-touched by JaMychal Hasty? Will fellow rookie Trey Sermon be active and getting carries? Until the depth chart really emerges, the Niners RB's should be a stay away.

After a disappointing Week 1, Jones will face a Seahawks secondary that could be easier on him. He's also a second week into gaining some trust from QB Ryan Tannehill and as the No. 2 wideout on the depth chart behind AJ Brown, there is an opportunity for him to breakout with the defense's attention divided. Jones is worth another stab this week.

Did you fall for the Callaway hype heading into Week 1? Did you overspend on him in your draft? Well he had one catch and two targets in New Orleans' Week 1 win and many are worried he was just a preseason hero. While there is ample chance for him to make an impact in fantasy, it might be best to bench him until he actually does it in a regular season game.

Kmet had seven targets for the Bears in Week 1 and proved to be a favorite target of Andy Dalton. Opportunity is everything in fantasy, particularly with tight ends who don't often produce from week to week. Take his inclusion in the offense as a sign of encouragement and fire him up for Week 2.

This duo, if combined, would be a startable option but the pair shared snaps and catches in Week 1 and neither appears to be a player who is expected to post fantasy starter numbers. Hooper had 5.6 points and Njoku 5.4, (.5 PPR via ESPN).