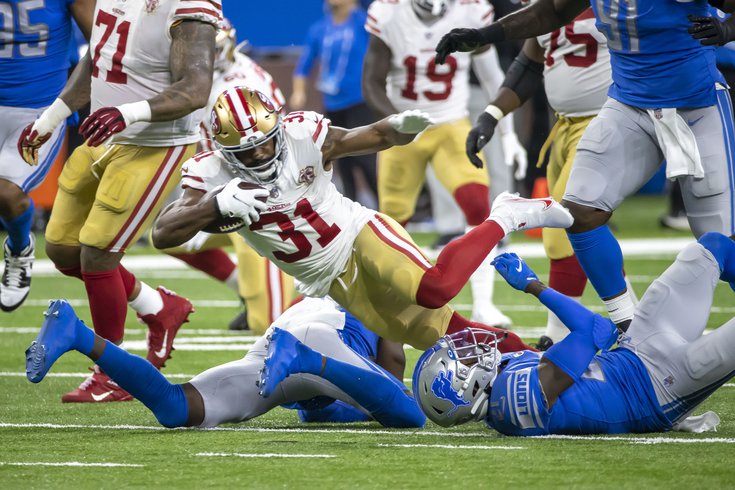 Week 1 is almost in the books (the Ravens and Raiders play Monday night), and it looks like, in contrast to recent years, fantasy football enthusiasts have gotten through a slate of games with few major injuries.

But the week was not without incident, as several fantasy relevant players went down with mostly minor injuries Sunday.

Here's a brief look at the latest news on some key players to help you figure out how to spend your week preparing for more fantasy football next Sunday.

The Broncos stud second-year wideout exited a win over New York with what was eventually diagnosed as a high ankle sprain, an injury that can take some time to recover from. The expectation is that Jeudy could miss multiple weeks, if not months. Perhaps KJ Hamler is worth a look, or Tim Patrick, as being the biggest beneficiary of getting his targets going forward.

The Niners had a few issues at running back last year, with injuries plaguing nearly every runner in a snake-bitten 2020. This year, things are kind of going the same direction. Pre-game Sunday, fantasy owners had to scrap rookie Trey Sermon — who was held out on a coaches decision — and go with Mostert, who would go on to hurt his knee. It is not believed to be a torn ACL, but it could hold the speedster out for more than one game. Which means Sermon should be rostered again (if you already dropped him).

#49ers RB Raheem Mostert has chipped cartilage in his knee. He will go on IR. Kyle Shanahan said expectation is about eight weeks for Mostert to return.

Looking for a second-year breakthrough, Aiyuk had hamstring issues that limited him to zero targets in San Francisco's win Sunday. Keep an eye on this injury. If he has a healthy week of practice, he should certainly see more action in Week 2.

Fitzpatrick has, at the very least, a subluxation of his hip — and the injury could be worse.

Taylor Heinicke will likely be the starter. This could effect the productiveness of Terry McLaurin and others, so pay attention to Fitzpatrick's status all week.

In deep leagues, Penny's injury could be of note. He had a few touches before leaving the game Sunday with a calf injury. DeeJay Dallas would likely be in line for a few more carries if Penny misses time.

Another fringe fantasy performer, the Seahawks underrated rookie could emerge as fantasy relevant across the board before the season is over. A concussion could stunt his progress if he has to miss time because of it.

After practicing in limited capacity, the Browns decided to air on the side of caution and held their WR1 out of their loss to the Chiefs Sunday. It looks like his recovery from a torn ACL is continuing, and he might be on the injury report for Week 2 as well. Have a backup plan — and consider starting Jarvis Landry, who had a solid 71 yards and a touchdown Sunday.

And finally one more injury check in, this one with Engram who sat out Week 1 after injuring his calf in the preseason. He could be a game-time decision for Week 2.