'The spirit is still there with him. He still has a radical heart and audacity,' said one congregant. 'He doesn’t pull any punches.' 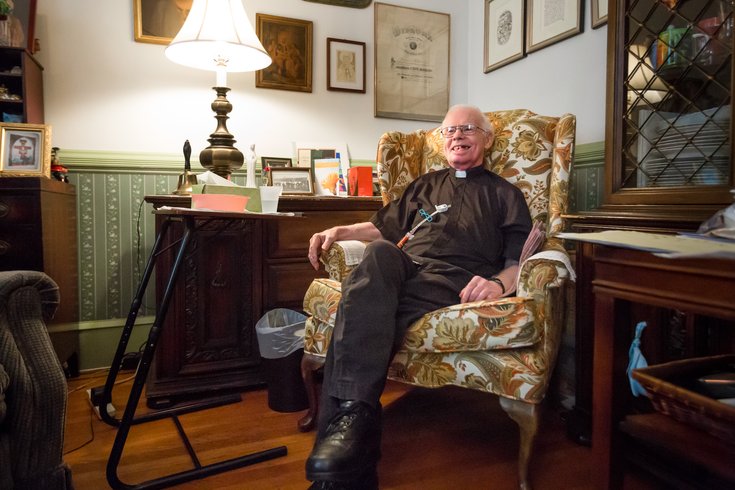 Monsignor Michael J. Doyle is the conscience of the city that has been home to the Irish-born expatriate since 1959.

“He’s Camden,” says Judyann Gillespie McCarthy, who has worshipped at Doyle's church, Sacred Heart, and had for years coached its girls' basketball team. “He’s a doer; he’s all action. He’s love in motion."

But Doyle’s no paper saint, says the woman who has sometimes clashed with the Roman Catholic priest.

“He’s a peacemaker – willing to fight for peace,"  Gillespie McCarthy adds. "Camden is not an easy place to be. And he’s been here! I admire him. He’s the real deal.”

You won’t hear the Sacred Heart pastor say anything like that even though he arrived in the Camden Diocese in the late 1950s and in the city proper in 1967.

He taught in diocesan schools at first and was briefly exiled for a time to sleepy and suburban Absecon, a bayside city across the water from Atlantic City. But otherwise the self-described “clodhopper” – a farm boy – from Ireland has ministered almost exclusively to the city of Camden. He has led the faithful at Sacred Heart, a church constructed of Trenton brownstone at Ferry Avenue and Jasper Street, since 1974.

“No one ever asked me to move,” he says with a leprechaun-like twinkle.

Doyle was jailed over the Vietnam war, then vindicated following a three-month trial.

The widow of the prosecutor who oversaw his federal trial and came to respect Doyle for his beliefs and eloquence when he defended himself in court, now helps support the school at Sacred Heart.

That benefactor is Maryanne Trump Barry, a federal circuit court judge in Philadelphia. She’s the widow of the late federal prosecutor John Barry – and the sister of presidential candidate Donald Trump.

He’s been profiled in stories and on news shows, including “60 Minutes” and “Sunday Morning,” and been the subject of a documentary about breaking into the Camden draft board office in 1971.

More recently, Martin Sheen narrated a documentary called “Poet of Poverty,” focused on Doyle’s poetry and his monthly letter to his congregation. His writing was collected as a book titled, “It’s a Terrible Day, Thanks be to God.”

POEMS OF LOVE AND HOPE

"His poetry seems to have a flow where the words and ideas seem to just naturally go together, as if assembled by a master tailor," says Walter Howat, who helps organize the poetry presentations at Collingswood's annual Book Festival, of Doyle's work. "He often takes the simple chores and items and makes them seem majestic, leaving the reader feeling that all we touch and see has an inherent specialness.

"He expresses clearly that even in the struggles of life there are hidden presents and love and hope. And his poems do at times ride on a wave of struggles. Some of his most meaningful poems are poetic trips to Ireland and to meet the family and friends he grew up with."

"He still has a radical heart and audacity. He doesn’t pull any punches. He’s a listener. That’s where his art comes from.” – Jerry Logan, parishioner

Howat said that when Doyle reads his own poetry, it gains another dimension.

"His soft, gentle – and yet firm – voice with its Irish lilt can set the verse on fire or at times be so joyfully musical," he said. "Perhaps the personality becomes greater than the poem."

Another book of Doyle's writings – titled  “When You Were Coming, You Didn’t Know Where You Were Going, and Didn’t It Turn Out All Right?” – is soon to appear.

And while he may have a poet's soul, he remains a rabble rouser when he sees injustice.

Doyle has helped plant crosses memorializing Camden’s murder victims on the front law of City Hall, in plain sight of Mayor Dana Redd’s office. He soundly criticized Redd and other local officials for not doing enough to stem the violence.

“The reality is the murders got to be unbelievable numbers,” he says.

Doyle had introduced Redd to Mother Teresa at his church 40 years ago when Redd was just eight years old. He’d told the bishop's secretary that the prelate was not invited to the meeting, which he tried to keep quiet. The nun's message to Camden was simple: "Keep love alive."

He sees a reminder of the meeting between the soon-to-be-canonized-saint and the eventual politician every day, captured in a photograph that sits in front of his favorite easy chair at the rectory. 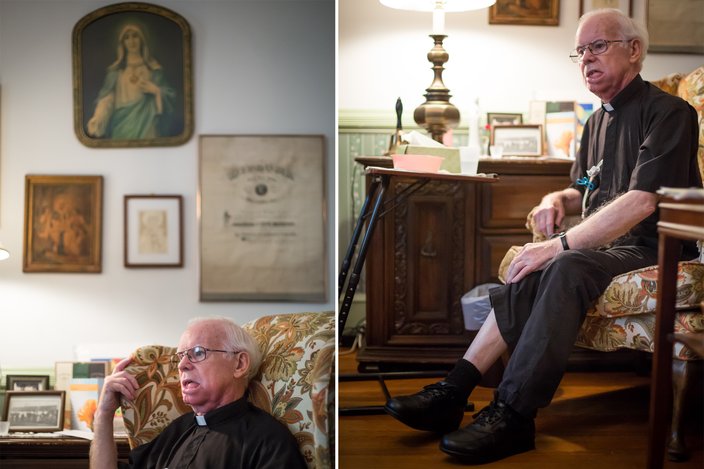 Monsignor Michael Doyle Of Sacred Heart Church in Camden shows where a bone graft was taken from his leg to be implanted in his jaw.

'FATHER DOYLE HAS EMBRACED EVERYONE'

Even at 81, he continues to speak truth to power about Camden, its people, poverty and social justice.

He has attracted an atypical congregation for a Camden Catholic church.

His flock is primarily white, primarily suburban, largely middle-class, generally liberal and socially active – not typically Camden, which is largely poor, and ethnically African-American or Hispanic, with just a smattering of Asian and white residents.

Jerry Logan, both Irish and African-American, was baptized by Doyle in 2011 after finding a path to the pastor's church.

“I’m grounded by Sacred Heart,” says Logan, a deejay who doesn't live in the city.

Doyle “understands the aesthetics of hope," adds Logan." It manifests with his attitude. The spirit is still there with him. He still has a radical heart and audacity. He doesn’t pull any punches. He’s a listener. That’s where his art comes from.”

“The future of Sacred Heart depends on his eventual replacement. No matter who is chosen, the personality of the church will not be the same." – Jim DiSimone of Collingswood, parishioner

Jim Cummings, who runs an outreach program aimed at Camden youth, says Doyle believes in the miracle of transformation – both its people and its infrastructure.

For educator Jim DiSimone, who calls himself “an out gay man,” the atmosphere of the parish is far different from a typical Catholic congregation.

“There’s a very strong focus on peace and social justice and we actively work with the poor. You don’t see that elsewhere," says the Collingswood resident. “Gay and lesbians feel comfortable here. No one makes assumptions or asks questions. There are other out gay members, including couples. Father Doyle has embraced everyone as part of the body of Christ.”

Maria Davis, an African-American woman who lives right across the street from the church where she has worshipped most of her life, said the neighborhood – noticeably cleaner and cheerier with lots of public art on display –  would have been "a lot worse," had Doyle not championed art, a community garden, feeding the poor and homeless and other community initiatives.

CANCER AND A CHURCH'S FUTURE

Recently diagnosed with cancer of the jaw, Doyle has not been able to close his mouth since St. Patrick's Day due to an operation. Some would say the pastor's mouth was seldom closed even before the operation.

And while radiation and surgery have arrested the disease – reconstructive surgery will be performed soon – DiSimone says the disease has made the congregation “keenly aware” of how the church might change under another priest’s stewardship.

“The future of Sacred Heart depends on his eventual replacement. No matter who is chosen, the personality of the church will not be the same,” says DiSimone.

A priest for 57 years, Doyle was the second of five children – “stuck between two saints,” he says of his older brother and a sister who became a nun. He donned a bedspread and said his first "Mass" at the age of five.

Born in 1934 and with Britain still oppressing the education of the Irish, part of Doyle’s early education took place furtively in a barn, where he mastered Latin, schooled by a priest.

He knew when he entered seminary his posting would be overseas: There were too many homegrown priests in Ireland back then.

His acquaintance, firebrand Irish activist and former member of parliament Bernadette Devlin, summed up his situation: “We have always exported our rebels.”

Doyle, who has ducked interviews for a profile in recent years (lest his bishop take note he is well past the retirement age of 75) adds, “It was the poor who were exported.”

Doyle chose the Camden Diocese when recruiters came to his seminary, St. Peter's in Wexford, Ireland.

“I knew nothing of it,” except he could easily reach New York by car for a trip back to Ireland.

Taking a boat to America gave Doyle the time to realize his Irish way of speaking was indecipherable to most Americans.

“I’m coming here to convert the natives and the natives can’t understand a word I’m saying,” giggles Doyle. He slowed down his delivery and it worked.

He recalls “it did shock me” when he first saw the neighborhood around Sacred Heart. The deterioration of Camden had already begun.

The exterior of the church, built in 1886, had turned black by 1920 from coal ash. Like the neighborhood, the since-scrubbed church was something of an “eyesore,” recalls Doyle.

The church's primary asset was a healthy school, not dependent on diocesan financial support. 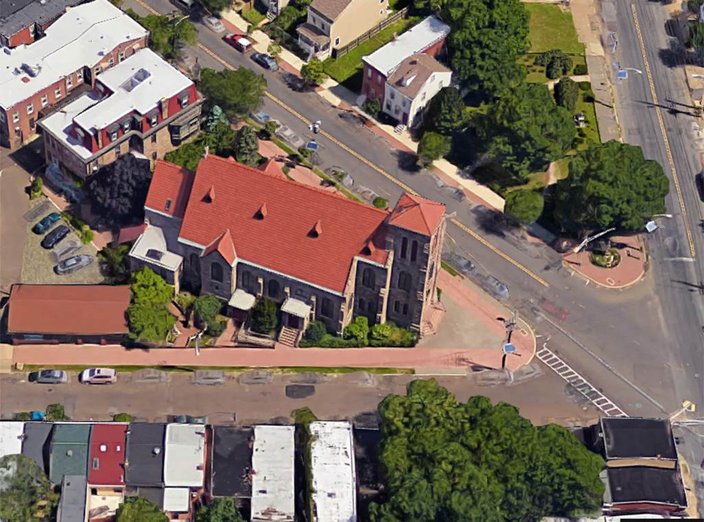 'FRIENDLY AS AN IRISH PUB'

To make the church “as friendly as an Irish pub,” Doyle has his parishioners greet each other near the beginning of Mass, not near the end. And congregants are encouraged to get out of their pews to greet each other.

It seems a small thing, but Gillespie McCarthy says that simple liturgical change has added a sense of community that isn’t there in other Catholic churches.

“He makes everyone touch each other, out of your comfort zone. That makes every aspect come alive,” she says of Doyle’s version of the liturgy.

Doyle finds it impossible to stay quiet when he believes there is wrong.

He complained bitterly about the band at Holy Spirit High School in Absecon, where he’d been sent to teach for 18 months, being used quite literally to drum up support for the war in Vietnam. The school’s officials were furious with him.

He soon found himself reassigned to churches in the city of Camden, where he and 27 others planned to sack a draft board office in 1971, at the height of that war.

As a member of "The Camden 28," he was jailed for a short time, spent three months on trial two years later, and ultimately found not guilty after delivering an extemporaneous closing argument focused on the morality of his actions, the immorality of war and the value of life, not the facts of the case.

He attended the funeral of  the federal judge in the case, Clarkson Fisher, in  1997.

The judge had told him he thought the closing given by Doyle was the best he’d ever heard. Doyle concluded his closing argument by telling the jury they had “the last two words.” Doyle says “the Holy Spirit created the words.”

Doyle was surprised when he was greeted warmly by John Barry, the federal prosecutor he had tussled with and several FBI agents who’d investigated him.

Doyle’s been an advocate for improved housing, medical care, art, beauty, education and writing for the impoverished neighborhood surrounding his church.

But his two greatest achievements, he says, is keeping the parish school open “when so many schools have died in Camden,” and opening the community gym, known as the Doyle Fieldhouse, to the entire community, not just church members.