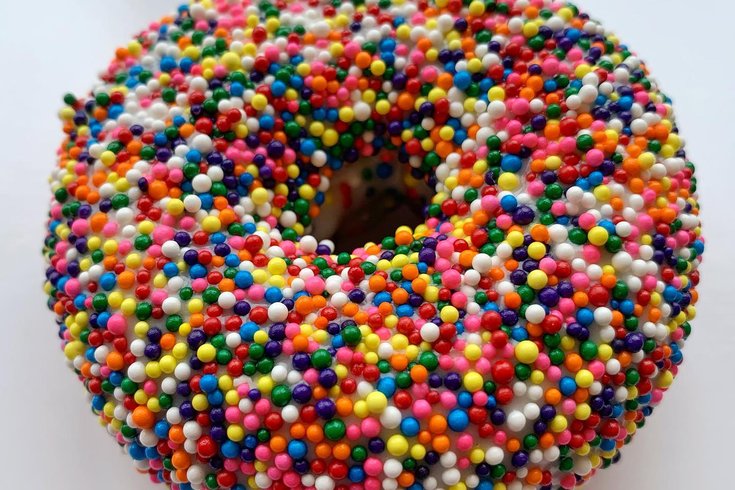 Federal Donuts' newest themed creation is dedicated to LGBTQ Pride Month. The Pride Donut will be for sale each weekend in June.

Philly's favorite local doughnut spot, Federal Donuts, announced on social media Thursday it will be celebrating June, which is LGBT Pride Month, with a rainbow-speckled donut available each weekend of the month.

MORE CULTURE: The '90s are back in the Kimmel's 'Cruel Intentions' musical

The creation, simply called The Pride Donut, will be available at Federal Donuts locations starting June 1. It's a vanilla cream-glazed donut, coated in rainbow nonpareils. It looks extremely festive, and extremely tasty:

We’re celebrating Pride every weekend in June (starting this Saturday, 6/1‼️) with 🏳️‍🌈THE PRIDE DONUT🏳️‍🌈〰️ Vanilla Cream glaze coated in rainbow nonpareils 🌈✨ A portion of the proceeds will benefit our friends at the William Way LGBT Community Center who have been encouraging, supporting, & advocating for the well-being and acceptance of sexual & gender minorities in Philadelphia for over 40 years 💘

According to Federal Donuts' official Instagram, a portion of The Pride Donut sales will be donated to the William Way LGBT Community Center, a Center City organization advocating for the well-being and acceptance of sexual and gender minorities in the area since the 1970s.

Notably, it appears this is the first time Federal Donuts has created a special themed donut for Pride Month.

The shops usually sell their "fancy donuts" – short for any doughnut outside of Cookies and Cream, Cinnamon Brown Sugar, and Strawberry Lavender, their three classics – for $2.75 each. The Pride Donut will likely fall under the fancy donuts classification, a small price to pay to support William Way and also eat a delightful doughnut.