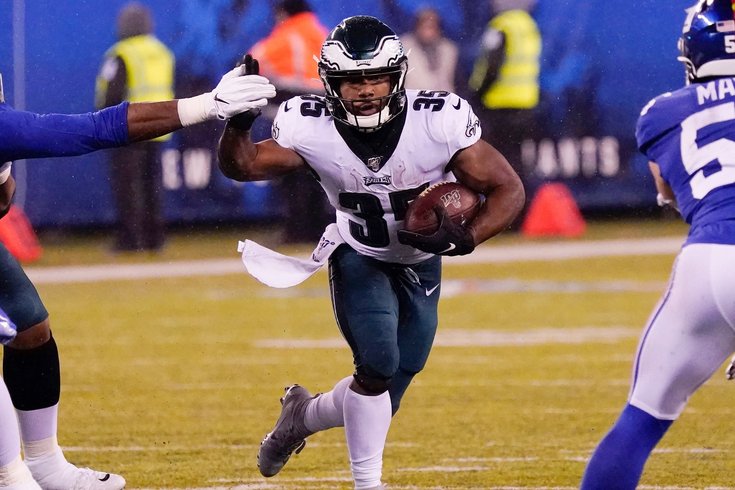 Philadelphia Eagles running back Boston Scott (35) runs the ball against the New York Giants in the first half at MetLife Stadium.

Behind a heroic performance from Boston Scott and big play after big play from guys on both sides of the ball, the Eagles beat the New York Giants 34-17 and won the NFC East crown, guaranteeing at least one home playoff game in Philadelphia this season. They'll face the loser of tonight's Seahawks-49ers game next weekend at the Linc.

• There are a lot of criticisms to be made of this Eagles team in hindsight. They relied too heavily on older injury risks, they skewed conservative with playcalling at the wrong times, their franchise quarterback had some baffling misses, wideouts dropped potential game-winning plays. You can't say this group ever caved or gave up, and that speaks to the leadership of the team whether you're looking at the head coach or the core players.

Yes, the Eagles ran through a bunch of terrible NFC East teams to close the season, which is a big part of why this is possible. But when you consider the amount of backups and practice-squad players who have had to contribute to even have the Eagles in position to win the division, what they accomplished is downright remarkable. Greg Ward and Boston Scott helped carry the offense down the stretch, for goodness' sake. They found ways to win, regardless of how battered they were and how ugly the games became.

It's a wins and losses business, and no one gets a participation trophy because the Eagles played hard when it counted. We can still acknowledge the character, resilience, and pride this team showed to put on for their franchise and their city.

• It's hard to figure out a way to sum up the regular season Carson Wentz just had. Frustrating at times, blindingly good at others, what ultimately matters is that he rallied the troops and delivered throw after throw when it mattered. And a small bit of credit goes to the coaching staff for figuring out something down the stretch — if you can get Wentz on the move, he has the arm talent to kill opponents all over the field.

There were not a lot of mistakes to point to from Wentz in this one, outside of the miss with Boston Scott downfield in the first half. He gave his unsung cast of wideouts a chance to make plays all over the field, and perhaps this will surprise you, but their ragtag band of skill position players delivered when it counted.

Maybe that underscores what has been true all along — regardless of who is in there, the quarterback has to guarantee the opportunities are there. Drops are frustrating, but they are a lot better to see than worm burners and sailed throws, which have been largely cut from Wentz's repertoire in the last few weeks.

Sometimes, winning in the NFL is as simple as playing mistake-free football. It was not a game where Wentz was in a position to throw for 400 yards and drop dimes all over the field. But he made all the plays that mattered and was a steady presence behind center, which is what the Eagles have needed him to be all along. The Eagles would not be in the playoffs without Wentz raising his game down the stretch.

• Ward has been my favorite story on the team for most of this season, but with a massive performance under extreme circumstances, I think Scott may have edged ahead of him. For a guy as small as he is, Scott runs with bad intentions, and when you combine that with how difficult his height makes it for teams to track him in the backfield, he has turned into a legit weapon for this depleted Eagles offense. In must-have play after must-have play, this dude just went and balled out.

Antoine Bethea, who said during the week that the Giants wanted to play spoiler for their divisional rivals, looked like he was wearing cement shoes trying to tackle Scott in the open field.

All the credit in the world goes to Duce Staley, who rode him when it counted and developed him in order to get to this point, and Scott himself, who gave the Eagles a heroic effort in the second half with basically no rest or help in the backfield. Looking at him behind Philadelphia's offensive line, you would think the Eagles have to use him situationally, but instead, Scott went out and dragged the team across the finish line.

Hell of a finish to the year for Scott, who could take this to the next level with some playoff heroics next weekend.

• Cre'Von LeBlanc had barely been on the field heading into the game, but boy did he make his snaps count against the Giants. Big-time pass breakups on third down, timely hits to unravel potential completions, every time he popped up on your screen he was making something happen. That included a pivotal series in the fourth quarter, when he took down Saquon Barkley in the open field to turn the Giants over on downs.

This guy lives for the moments when all the chips are down and he is thrust into emergency duty, I suppose. He is a fan favorite in Philadelphia at the very least, and it seems like they should find a bigger role for him next season, assuming he is still here.

• This is, with no hyperbole, the biggest play of Dallas Goedert's career to date. Everything seemed to be tilting in New York's favor in the second half, and then he came down with this toe-dragging catch on the sideline:

Come for the throw, stay for the catch.#PHIvsNYG | #FlyEaglesFly pic.twitter.com/YkhXf38NFT

He was not the No. 1 option many would have expected him to be coming into the game with Zach Ertz out. But these are the plays Philadelphia drafted him to make, and those are the throws Carson Wentz was paid big money to execute. Excellent work all the way around on that one.

• Jim Schwartz tends to prefer to rush with his front four and his front four alone, banking on the big boys upfront to get the job done. But his willingness to blitz this year has turned into some big plays for the Eagles, and none of those plays loomed larger than the blitz that led to Philadelphia's big forced fumble and recovery deep in Giants territory.

Daniel Jones mishandling the snap gave them the chance for Malcolm Jenkins to make the play, but if Jenkins isn't coming through on a blitz here, Jones would have had a much easier time eating the poor snap and taking the loss. Instead, Philadelphia's veteran safety made an excellent play on the ball, and Fletcher Cox finished the play with a terrific effort to secure the loose football.

It is not lost on this writer that Cox and Jenkins combined to make that play. Those two have higher expectations on them than basically everyone else on Philadelphia's defense, and when it was time to stand up and be counted when the Eagles needed it most, they were there.

• Through nearly three-quarters of play, the Eagles looked to have bottled Barkley up with great play in the trenches. Think about this for a moment — prior to his long touchdown run, Barkley had 10 yards on 11 carries, which would have been an enormous point of pride for the defense. They were daring Jones to beat them, and that gameplan was working perfectly up until that moment. You can't slack a minute against a runner like Barkley.

But I'm more inclined to give them credit for (mostly) shutting him down than I am to lament one admittedly poor angle taken by Rodney McLeod on a big touchdown run. The Eagles had a simple but smart gameplan — make Jones beat them. They executed it to perfection thanks to contributions from guys all across the line, with Tim Jernigan, Brandon Graham, Cox, Derek Barnett and more all combining for big stops when they needed them.

• Barnett's offsides penalty early in the third quarter was an absolute howler, my word. The Eagles had New York in a third-and-long and he looked like he was reacting to a snap in an alternate dimension. He has taken some brutal penalties this season, and that ranks near the very top.

If not for Barnett's penalty, are the Giants in position to score a touchdown later that drive? It's impossible to actually know, but it sure didn't help. New York looked to have gotten away with an uncalled delay of game on that play, but that's not an excuse for Barnett to go flying across the line before the snap happens.

• A perfect summary of the Eagles season at wide receiver: Rob Davis came up with one of the biggest and best catches of the year, only to watch the 43-yard gain get wiped out by a holding penalty. You can't make this stuff up. Big V was an absolute nightmare for long stretches of Sunday's game, taking that awful penalty on top of getting bulldozed or smoked around the edge. The Eagles need Lane Johnson back for next week's playoff game badly.

• I sure would have liked to know if there was a defensive pass interference penalty on New York on Philadelphia's drive that ended in a field goal to start the fourth quarter. Unfortunately, Fox was more interested in showing a completion in the Dallas-Washington game that showed us nothing that couldn't be conveyed via a scoreboard in the corner, and we never got to see a replay. Cool broadcast.

• This about sums up Philadelphia's injury situation:

Brandon Graham went into the locker room... Partially because there was a WAIT to get into the medical tent! This is NOT a joke.

What they have had to overcome is remarkable. Graham headed to the medical tent shortly after the second half started, and Craig James looked to be on his way to the locker room before three minutes of game time had gone by. James did a u-turn toward the tent, only for Graham to hit the locker room instead. How does one even keep track of all these trips to the tent? There should be an app for this.