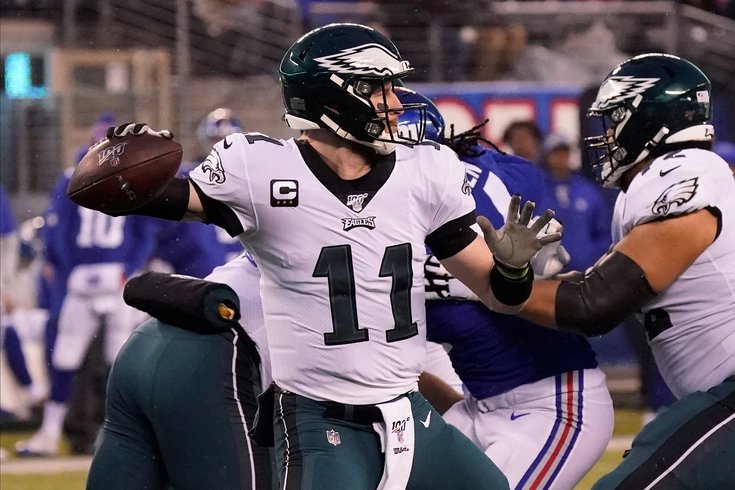 Philadelphia Eagles quarterback Carson Wentz (11) throws a pass against the New York Giants in the first half at MetLife Stadium.

The Eagles' playoff berth looks like it will hinge on whether they can keep enough guys healthy to play a football game, as they lead 10-3 at halftime in spite of another wave of injuries to key players.

Here's what I saw in the first half on Sunday evening.

• The Giants have been good at stopping the run this season, and that was the only thing stopping the Eagles from moving the ball down the field in the first half. When big holes opened up for Miles Sanders, he gashed the Giants for big chunks of yards, and even when they weren't there, Sanders did a good job of finding the small chunks of yards available to him, picking up a few yards at a time on plays that could have gone for losses.

Big plays have been there for Sanders basically all season, and he had a couple of nice runs ahead of the halftime whistle, but his maturation when something isn't there has been the most important part of his development. He is patient without being hesitant, and he is better in touch with his power, having figured out when to lower his shoulder and when to sidestep for extra yardage.

Broken plays are often turning into positive gains, setting up easier second and third-down situations for the offense, which needs all the help it can get with this set of skill position players.

• While we're on the subject of running backs, Boston Scott may have muffed the opening kickoff but he has been much better than he has had any right to be in emergency duty down the stretch. It is hard for teams to keep track of him in the backfield, which is an asset whether you're trying to run him between the tackles or use him in the screen game.

This is just a wonderful individual effort:

• Carson Wentz was flushed out and pressured a decent amount during the first half, but I thought he acquitted himself well in these circumstances. This is a much tougher throw than it looks, going all the way back across the field for a touchdown to Josh Perkins:

THE VISION AND THE CROSSFIELD DIME WENTZ IS ELITE pic.twitter.com/U6bn5Eq42T

Wentz made nearly every throw he had an opportunity to step into against New York in the first 30 minutes, and they will need him to duplicate that success in order to lock up their playoff berth in the second half.

• Philadelphia's defensive front did a tremendous job containing Saquon Barkley in the first half, which is easier said than done when you're down several corners and rightfully fear leaving members of your secondary on an island. The front four did an excellent job winning their matchups early, and with Barkley unable to get much separation, Daniel Jones ended up throwing in a lot of third-and-long situations, which is the ideal place to be.

Brandon Graham was perhaps the player of the first half for both teams, shedding blockers with ease to blow up run plays and pass plays alike. His third-down sack of Jones in the first quarter was the product of a nice stunt with Vinny Curry, but outside of that, there was just a lot of Graham blowing the Giants' line up, including a play on a punt that drew a holding penalty. This is a guy who has come up large in must-have games before, and he is off to a great start again this week.

After struggling to get going as a unit early in the season, the Eagles have settled into a groove in the trenches. When you consider the early injuries they suffered at defensive tackle, it is pretty impressive that they've been able to string together great performances down the stretch, regardless of the opponent.

• The Eagles are down roughly a million players on defense, and as it turns out, Cre'von LeBlanc is built to shine in moments like these. He was one of the surprise heroes of last season's surprise run, and though he has not featured much since returning against Miami, LeBlanc came up with some big early plays to get the Eagles rolling. None were more pivotal than a pass breakup on third down that forced the Giants to punt and stopped New York from building anything positive after the Eagles' turnover on downs.

He was not the only Eagles corner to come up with an important breakup — Avonte Maddox and Rasul Douglas each came up with plays of their own (albeit on suboptimal Jones throws) to prevent big Giants plays. The next man up mentality is real.

• Not often we talk about the punter in this space, but Cameron Johnston did an excellent job during a first-half centered around the field-position battle.

• Philly's playcalling did not always reflect this, but I liked Pederson coming out and approaching fourth downs with the attitude of playing to win, rather than trying not to lose. If you're going to go down, you might as well go down being aggressive on fourth-and-short like you have your entire tenure, and the Eagles benefitted from keeping their foot on the gas.

• I liked the decision from Pederson to go for it on fourth down on Philly's first drive of the game, but Big V got absolutely smoked on the edge and didn't give Wentz a chance to assess his options before having to wind up and throw.

The offensive line struggled in general throughout the first half, and though Wentz was able to stay upright a lot of the time, it made it hard for the Eagles to generate anything beyond quick-developing plays on offense. New York's secondary is an absolute joke, but with Wentz unable to hang in the pocket very long, it made it hard to actually take advantage of that fact.

• Not sure what the Eagles saw on film that suggested they should throw a bunch of screens on third-and-long against a horrific Giants secondary. When you're up against a group of guys who have proven they can't cover down the field, I don't think the answer is to make their jobs easier by putting everything in front of them.

Was it an ideal environment to try to beat New York over the top all day? Certainly not, and Philadelphia's poor pass blocking contributed to what they were able to run. But I can't figure out why the initial script featured such conservative playcalling because it lets the Giants get off easy for their biggest weakness.

On top of that, I'm not sure what the Eagles have to gain by going play-action heavy against the Giants, a heavy blitz team. When you're trying to draw in defenders and open up windows to throw into, that's one thing, but play-action against a team like the Giants often gives them what they want — a better chance to bring down the quarterback. Seems like an easy adjustment the Eagles could make in the second half.

• I would say Wentz was pretty decent in the first half overall, but he and Scott missed a big opportunity for a big play midway through the second quarter. Scott beat linebacker Alec Ogletree for what looked to be a potential touchdown, but he and Wentz clearly did not agree on where the pass needed to be thrown, leading to a harmless incompletion that fell to the turf. Can't leave plays like that on the field.

• Truly, nothing like muffing the opening kickoff and starting with terrible field position. Great work by Scott. All things considered, I thought Philadelphia's first drive of the game was pretty decent, as they were able to move the ball in spite of a dearth of weapons and a deep starting position.

• Deontay Burnett getting the start at outside wide receiver over J.J. Arcega-Whiteside is absolutely hilarious to me, honestly. Just terrific stuff. And to make matters worse, Greg Ward appeared to hurt his ankle on a freak accident on the very first series of the game, because as everyone knows, the Eagles have an abundance of skill position guys to turn to at this point.

• Monitoring the medical tent is basically a full-time job for Eagles reporters and fans this season. After Ward took an early trip there, Sanders spent a good chunk of the first half in the tent before eventually heading to the locker room. There's no telling who might make an appearance before the game is over. The crappiest of all surprises await.

Brandon Brooks is down after the extra point

Brooks' injury looks the most serious in nature, as he was taken off on a cart and didn't move his arm on the way off of the field, which seems like a bad sign.

I predicted an Eagles win coming into this game, and I still ultimately believe they're going to pull this one out, but man, how many injuries can one team be expected to overcome? The bulk of their offense has gone down, most of their secondary is out, they're missing pieces on both lines, there's nowhere the Eagles can point to and say, "Man, we've gotten tremendously lucky with health at that spot."

If they somehow manage to win this game, it will be in true MacGyver fashion, tied together with shoelaces and paper clips.