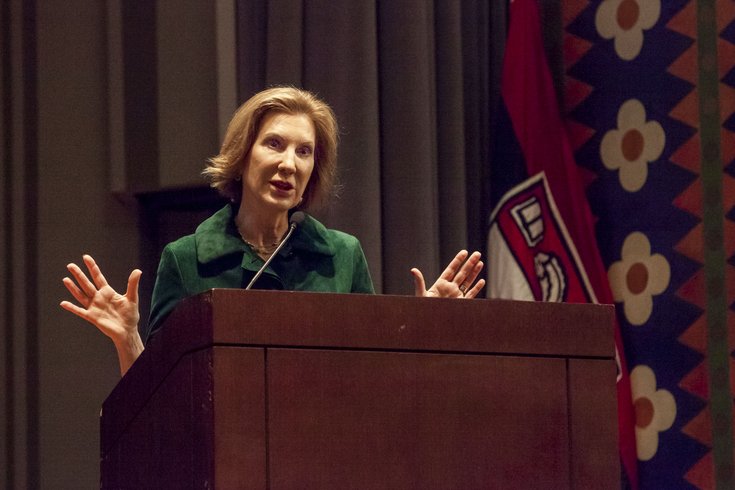 Carly Fiorina, a 2016 Republican presidential candidate, gives the keynote address at the Keystone Conference on Business and Policy, Thursday, Nov. 19, 2015 at the University of Pennsylvania's Irvine Auditorium.

Fiorina, the former head of Hewlett-Packard, served as the keynote speaker at the inaugural Keystone Conference on Business and Policy, a two-day business forum being held at the University of Pennsylvania.

"I believe it is time to take our government back," Fiorina said. "I started out by saying it is important to remember who we are. Ours was intended to be a citizen government. When our Founding Fathers gathered here, they did not intend to have a professional political class."

But Fiorina's remarks fell on scores of empty seats at Irvine Auditorium. Though more than 700 people registered for the conference, less than 100 of them appeared for Fiorina's 9 a.m. keynote address.

Conference spokesman James McDonald said organizers were unsure how many people would attend the keynote address, given its newness. But he praised Fiorina as the "perfect person" to address the forum because her experience blends business and policy – the two aspects of the conference.

Fiorina served as HP's chief executive officer for five years, overseeing the acquisition of Compaq Computers before being ousted in 2005. She boasts of doubling revenues to $90 million and quadrupling growth. Yet, her detractors note that shareholder wealth fell by 52 percent during her tenure while the S&P 500 only dropped by 15 percent.

"Entrepreneurship and innovation has always been the secret sauce of this nation," Fiorina said. "It is how and why wave after wave of immigrants in this country lifted themselves up. This was a place where people could take chances, take risks, figure out what they were made of, find their own path."

The United States is no longer that place, Fiorina said, pointing to stagnant middle-class wages and growing income disparities. Fiorina blamed big government, saying the scope of the federal government has grown well beyond what the Founding Fathers envisioned.

"This is not an economy anymore that works for everyone," Fiorina said. "We have come to a pivotal point in our nation's history where, truly, the possibilities for too many Americans — entrepreneurship and innovation — is being crushed. It's being crushed by a government that has grown so big, so powerful, so costly, so corrupt and so inept." 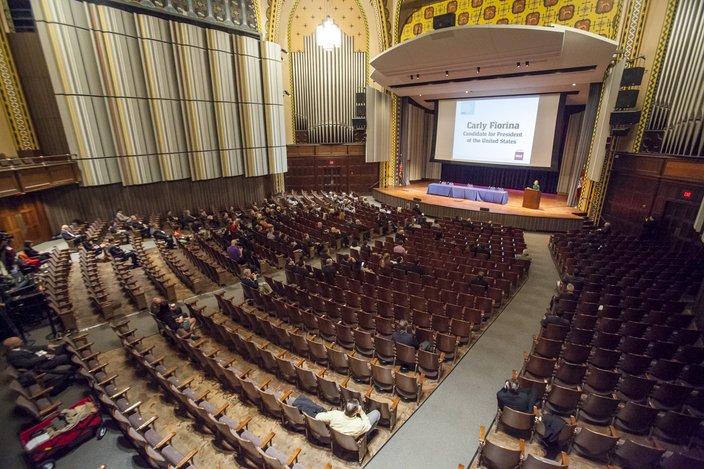 A small crowd listens to Republican presidential candidate Carly Fiorina deliver the keynote address at the Keystone Conference on Business and Policy on Thursday morning at the University of Pennsylvania.  (Thom Carroll / PhillyVoice)

"The facts she shared about the size of government and the dysfunction we have there is critically important," Blatney said. "We have to do something to fix the issues we have at the governmental level."

"Every single one of these things can be done," Fiorina said. "All of them have been suggested over many years through the decades by Republicans and Democrats alike. And yet they do not happen."

Fiorina never has held political office, but she surged up the polls following her performance at the second Republican presidential debate, where she rebuked Donald Trump and criticized funding for Planned Parenthood. Her polling numbers have since fallen from the ranks of the leading contenders.

Andrea Zane, an advertising director at South Jersey Business Magazine, found Fiorina's advocacy for limited government "refreshing," saying the country has moved away from such policies.

"The whole thing with the tax codes – we've just overcomplicated it," Zane said. "Her ideas to make government accountable was resounding to me. Where there isn't accountability, there is mediocrity."

Following her 27-minute address, Fiorina fielded four questions from the crowd. In her responses, she criticized the Dodd-Frank Act, championed her leadership at HP, blamed the federal government for escalating student debt and decried the power of the Federal Reserve System.

The Keystone Conference was to include panel discussions broaching the topics of economic development, school funding, manufacturing and unions, among others.