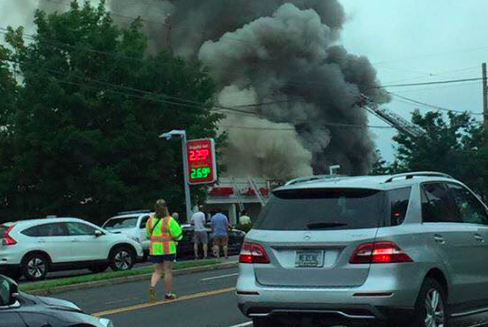 Fire breaks out at Center on Main Street in Doylestown.

Firefighters in Doylestown have contained a three-alarm blaze that started late Monday afternoon at a local strip-mall and sent smoke billowing into the sky during rush hour.

The flames were brought under control at approximately 8 p.m. Several firefighters were hospitalized for unspecified injuries and their conditions were not immediately available.

Earlier Monday afternoon, the Borough of Doylestown posted an alert on Facebook warning residents and commuters to avoid the area around the Center on Main Street, located on the 600 block of North Main Street.

As firefighters confronted the flames, the blaze intensified and additional alarms were added for reinforcements from other stations in Bucks County.

One of the businesses in the strip mall, Grove Supply Inc., appeared to be at least one source of the smoke.

Officials later announced the closure of portions of Main Street and East Street.

It was not immediately clear what caused the fire.