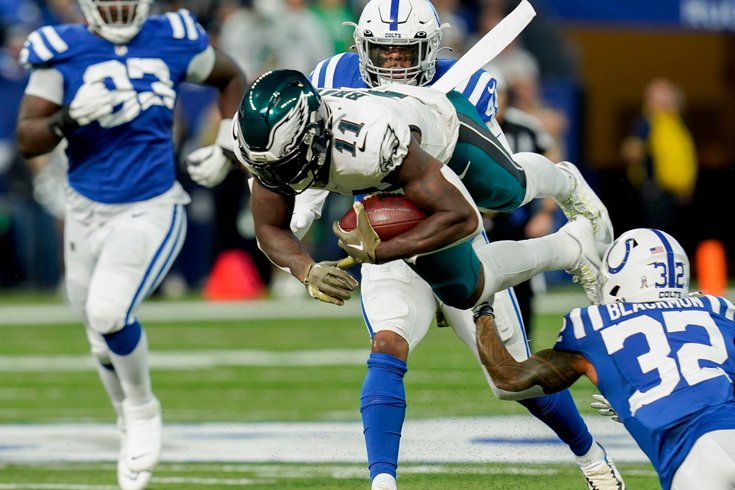 Eagles WR A.J. Brown dives for extra yardage as tacklers close in during the first half of Sunday's game against the Colts in Indianapolis.

The Eagles shot themselves in the foot with penalties throughout the first half on Sunday, and they trail 10-3 to the Colts at halftime as a product of their own mistakes.

• It took all of one play for Linval Joseph to help out with Philadelphia's run defense. He was in on the tackle on the first play from scrimmage. That's what you like to see.

• Credit to Philadelphia's defense for getting its act together after a rough start, even if it owes some of its success to bizarre decision-making from the Colts on offense. Instead of riding the early hot hand and force-feeding the football to Jonathan Taylor after a huge opening series, the Colts relied a lot more on throwing the football moving forward, which did not work in their favor. Is Jeff Saturday aware of the state Matt Ryan is in these days? And the Colts joined the Eagles in committing a series of dumb penalties, both teams caught up in a ref show on Sunday afternoon.

All of that said, Gannon's unit managed to come up with three consecutive stops after giving up a touchdown on the opening series, and that's all that really counts in the end. With the Colts playing out of a lot of third-and-longs in the opening 30 minutes, we got to see the Eagles at their best in coverage, even with Gannon making some questionable decisions — it was not a shock to see the Colts convert, for example, when Josh Sweat dropped back in coverage. On the next third down, Sweat rushed Ryan and forced him to get of the ball for an incompletion before Sweat could haul him down. Shocking, I know, but using one of your best pass rushers to stress the opponent's quarterback tends to help your team.

• TJ Edwards crushing Deon Jackson on a pass to the flat is as close as the Eagles came to a highlight the entire half, so it gets a mention here.

• After getting torched on third down by the Commanders a week prior, you were hoping for a better effort from the Eagles to open their game against the Colts. For the blitz-craving fans, Jonathan Gannon even tried to use some aggression on the first third down of the afternoon, sending a blitz at Ryan in an attempt to get off of the field.

It ended poorly for the Eagles, with Michael Pittman Jr. going over the middle for an easy pickup and drive extension. Good luck getting Gannon to send a blitz on an important play the rest of this game.

The bigger problem after that initial conversion was Philadelphia's inability to stop the run. Big surprise: Taylor was fresh off of a big performance in Saturday's debut, and the Eagles have looked poor stopping the run since Jordan Davis was knocked out of the lineup due to injury. Taylor went for seven yards per carry on the opening series, including a big gainer immediately after Pittman's critical catch on third down, and he would eventually punch it in with a short-yardage carry to put the Colts out in front.

We are past the point where the poor run defense can be written off as a blip. They need to get it together in a hurry, or this dream start to the season is not going to mean a whole lot in the end.

(Easy to blame the personnel and say this is all because Davis was a difference-maker, but the Eagles sitting in nickel on third-and-goal from the one-yard line was really something. Not sure why you'd expect a different result against Taylor in that spot.)

• The opening drive for the Eagles' offense got off to a promising start, A.J. Brown wiping last week's poor game away with an immediate catch and first down for the Eagles. It looked like we might be in for a shootout in the dome environment, and I would have favored the Eagles in that spot given the body of work.

That could still be where we end up, but Grant Calcaterra picked up a brutal holding penalty to wipe out a third-down conversion for Miles Sanders. That set up a difficult third-and-long that Hurts nearly snuck in to DeVonta Smith over the middle, but when they couldn't quite hook up, the Eagles were forced to give it right back to Indy.

Stupid penalties were the theme of the first quarter for Philadelphia's offense, their second drive one of the most error-prone sequences they've had as a team all year. Three consecutive penalties — an ineligible man downfield, a holding, and offensive pass interference — put the Eagles at a whopping first and 35 to go, moving them from a promising spot in Colts territory back to their own side of midfield. It was pretty immediately clear the Eagles missed Dallas Goedert, because two of his fill-ins committed penalties on their first two possessions of the game.

That doesn't take blame completely away from the quarterback, who mostly played well out of the chute. After giving the Eagles a chance to convert for a first down despite the 35-yard odyssey they had to go on, Hurts took a sack that moved Philadelphia back out of field goal range on third down, taking points off of the board by stepping right into pressure. The numbers are going to be completely unfair to his performance after the first half — several good throws and gains were wiped out by the aforementioned penalties — but he took a costly sack and added to the list of grievances.

• Let's build off of that last bullet point. Hurts was one of the only guys on the positive side of the ledger, and he had the Eagles looking like the team that began the season 8-0 when the second quarter started. Flush all the penalties they committed in the opening quarter, and you can find plenty of positives from the opening half. Hurts worked around the absence of Dallas Goedert by hitting Brown and Smith over and over again in the opening half, riding his top weapons and moving the ball effortlessly whenever the Eagles stopped tripping all over themselves for more than a couple of plays at a time.

And then, you guessed it, another mistake happened in a critical moment. The Eagles got a rare error from Jason Kelce on a snap deep in Indy territory midway through the second quarter, on a second-and-goal play that at the very least should have ended with no gain and another shot at the end zone. Hurts nearly came up with Kelce's high snap, but the QB was eventually forced to fall on the football and eat a loss. Hurts couldn't find anybody on third down, and his futile run toward the end zone fell well short of paydirt, the Birds eventually settling for a field goal. A rough way for a good drive to end.

The Eagles just made too many mistakes in the opening half, and if you squint hard enough, you can view that as a silver lining. They're still in this game in spite of the sloppy play, and if they can cut back on the self-inflicted wounds, they should be able to run away from this Colts team. Easier said than done right now, though.

• Can't say I would hand the ball off to Kenneth Gainwell on a run between the tackles on a must-have down. Maybe that's just me.

Also don't think I would have Brown standing on the sidelines for every down of a possession, as the Eagles did on that same series. I doubt that is just me.

• The Colts dropped a punt and had to scoop it off of the turf and still managed to look more threatening than Britain Covey has returning punts all season.

• Not sure why the Colts would choose to throw the ball on third-and-one against this Eagles defense, but Gannon owes them a debt of gratitude for doing so. For that matter, Gannon owes Saturday for passing the ball on all three downs of their second possession after running it down Philly's throat on the previous possession. Bizarre decisionmaking.

• Horrific job of showing replays and generally showcasing must-see plays in the first half by the CBS crew.