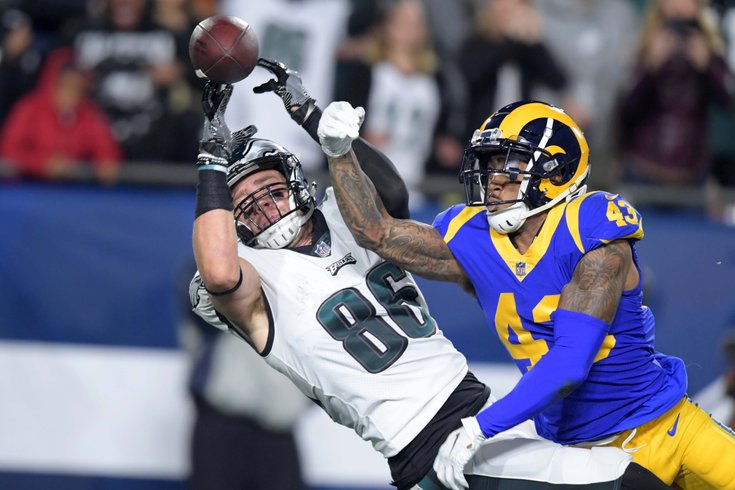 The Eagles entered Sunday as massive underdogs, and maybe that's just what they needed all along. Behind a great half from backup Nick Foles, the Eagles head into the locker room tied 13-13 with the Los Angeles Rams.

Here's what I saw during the first half, where my own disagreements with the coach's strategy turned out to not matter much.

• Just as they did against Dallas a week prior, the defense came out ready to play in Los Angeles. A tackle for a loss by Malcolm Jenkins on the first play set up a great first series, with Avonte Maddox combining to break up a throw down the sideline on third-and-long. So far, so good.

• Nick Foles has his limitations, but the guy didn't win a Super Bowl by mistake. When he's feeling good, he's capable of some pretty incredible throws, and he helped extend a first-half drive with this sucker:

Foles would have had a touchdown throw later in the same drive if not for a really nice break-up in the back of the endzone by John Johnson, who knocked the ball out of Zach Ertz's hands before he could haul it in. That was through no fault of the QB, who delivered it about as perfectly as you could have asked for.

The biggest limitation for the Eagles in the first half was their coach's lack of aggression, not Foles. He struck a nice balance of attacking downfield with checking down underneath, and the Eagles looked like a competent offense as a result.

By the way, it sure was nice to see the connection with Alshon Jeffery reemerge. It was hard to know whether that was a playoff fluke or a real partnership with Foles on the sideline most of this year. But it looked pretty damn good through 30 minutes on Sunday, with a pair of huge Jeffery catches setting up Philadelphia's first touchdown of the day, a run up the middle for Josh Adams.

Throw Jeffery the damn ball, in other words.

• Welcome back, Avonte Maddox. One of the year's nice surprises, the rookie corner/safety/let's just say secondary member came up with a brilliant interception early in the second quarter, shining during his opportunity to play outside corner.

No idea how he kept this one from hitting the turf:

What a find by Joe Douglas to pluck Avonte Maddox in the 4th round, he's been an x-factor all year! pic.twitter.com/MoiPfGvmTY

Maddox has more than earned the trust of the coaching staff and is looking like one of the best Eagles draftees in recent memory. Who knows what he can do with some more time to develop (and some certainty in what position he'll play).

• After surviving an early injury scare, it was great to see Fletcher Cox get involved on a third-down sack deep in Eagles territory. Just as good and perhaps better — the Army crawl celebration he unleashed after forcing Jared Goff to duck for cover.

• Why did Wendell Smallwood get the first carry of the game for the Eagles? What universe am I in?

• Did not like the decision from Doug Pederson to kick a field goal on their first drive. Against a Rams team with this much weaponry (and with your defense as banged up as it is), I would prefer playing on the front foot. The Rams average over 32 points per game — field goals probably aren't going to get it done.

The head coach made a similar decision on the very next drive, settling for a field goal inside LA's red zone. With Foles coming out looking good and the Rams gashing the Eagles on the other side of the ball, I don't really get playing that conservative. If you're buried by the time the offense really gets going, the field goals aren't going to make a big difference anyway.

Despite my complaining, the game has trended closer to a defensive struggle than a shootout, and the Eagles have come out ahead. So maybe 'ol Doug knows what he's doing after all.

Unfortunately, we don't have a section called, "The Philosophical Disagreement," so it goes here.

• If the first defensive drive was a blueprint for success, the second showed exactly why Pederson settling for a field goal was the wrong strategy. Jared Goff tore the Eagles to shreds on LA's second possession, driving right down the field to take the lead back from Philadelphia. Goff was 7-for-7 for 61 yards on the drive, and most of his completions were easy ones, met with little resistance from the secondary.

The Eagles just don't have enough bodies to keep up with the Rams. Sean McVay keeps defenses on their toes even when they're at full strength, and it's tough to ask a bunch of backups to win coverage battles against the Rams when they have to make sure to stay home against the run, too.

I just shrug my shoulders sometimes. For as banged up as they are, this team is still competing.

• I liked the decision to go for it around midfield on fourth and one after Maddox's interception. The execution of the play that followed was, on the other hand, pretty damn bad.

Some of that comes down to the personnel, by the way. Putting Josh Adams in the backfield telegraphs the play call, and makes it a hell of a lot harder to pick up the first. When the defense knows he's not trusted to catch the ball or pass protect, they can guess where you're going. And it's (probably) not a toss to the outside.

• Fletcher Cox appeared to be in a lot of pain on the sideline after the Rams' first scoring drive, and that is not a player the Eagles can afford to lose for any period of time. He's a tough, durable son of a gun, so seeing him in pain at all was a little off-putting.

Moments later, he was being carted back to the locker room as Josh Adams took his place in the pop-up injury tent. That's the Eagles' 2018 season in a nutshell.

• Nick Foles took a shot to the face from Aaron Donald's elbow, but I suppose that sort of thing is okay? Love talking about the officials every week.