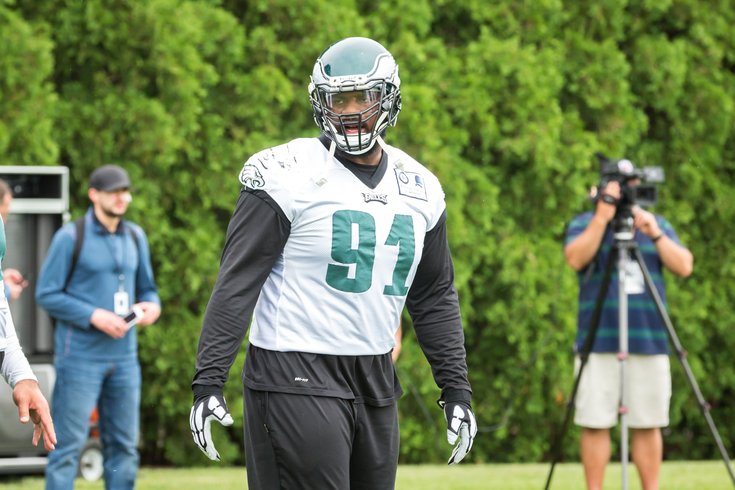 Fletcher Cox during OTAs at the NovaCare Complex.

UPDATE — [9:10]: After the Eagles were unable to convert on fourth and one, Fletcher Cox was back on the field when the defense took over again.

He didn't look great in his first few plays back in the game, but him being back is definitely a good sign for a defense just hanging in there to keep Philly in the game.

One of the only ways for the Eagles to win in Los Angeles will be to get pressure on Jared Goff.

On the Rams first touchdown drive they didn't do a particularly great job. That may not get any better.

Apparently, Pro Bowl defensive end Fletcher Cox was carted off the sideline in the first quarter after Todd Gurley scored.

Fletcher Cox is getting carted into the locker room. #Eagles

As the Eagles defense re-took the field Cox was not in the line up, though reports say he is questionable to return with some kind of hip injury and is back on the sideline.

Bruce Hector and Haloti Ngata are the defensive tackles at the moment. Cox is stand on the sideline. Doesn't have his helmet on.