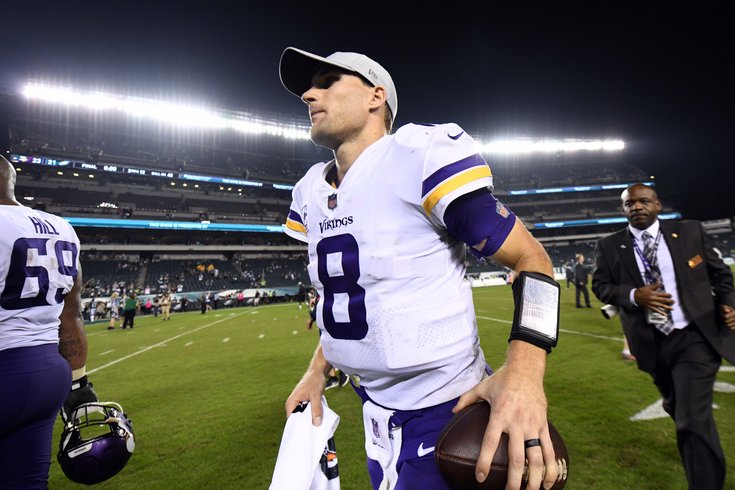 The Eagles would benefit from a "Kurt" Cousins loss.

In past seasons, Philadelphia Eagles fans generally rooted for their own team, and kept an eye on the rest of the NFC East. In 2018, with the Birds initially being among the favorites to represent the NFC in the Super Bowl, it was perhaps worth keeping tabs on the conference, as opposed to just the division. And so, each week we laid out a rooting guide for non-Eagles games on the NFL schedule.

Eagles fans' outside rooting interests have long since shifted from earning a first round bye, to just having a seat at the table, at all, in the playoffs, to some even rooting for draft position at this point.

Ideal winner in bold in each game below:

First, the games that matter for Eagles playoff contention, if you still care about that

• Dolphins at Vikings: The Eagles are only a half-game out of the wildcard, which goes to show how crappy the NFC turned out to be this season, after many (self included) thought it was loaded heading into the season. The Vikings are the team with that half-game lead, so they'll need to continue to lose for the Eagles to have a shot at the playoffs.

• Saints at Panthers: The 6-7 Panthers have the same record as the Eagles, but would beat them out in a tiebreaker scenario because of their win over Philly earlier this season. They've lost five games in a row, and the Eagles would benefit if Carolina's downward spiral continued.

• Packers at Bears: The 5-7-1 Packers are only a half-game behind the Eagles in the wildcard hunt, so they're still something of a threat to overtake them.

• Redskins at Jaguars: The Redskins are tied with the Eagles at 6-7, though they have no realistic chance of making the playoffs, as they currently look like the worst team in the NFL. Still, if you're into rooting for every scenario that will help the Eagles make the postseason, it's better if the Redskins are further buried.

In the event the Eagles completely crap the bed down the stretch, the following bolded teams would give the Eagles the best chance of moving up in the draft order with wins:

• Buccaneers at Ravens: The 5-8 Bucs are a game behind the Eagles, and own a head-to-head tiebreaker advantage. Like the Packers, they're just kind of hanging around. But at this point, if the Bucs are going to overtake the Eagles, then the Birds really don't deserve to make the playoffs, obviously. Just root for the Ravens to lose, since Philly owns Baltimore's second round pick.

• Patriots at Steelers: It's better if the Steelers win the AFC North, because of the aforementioned desire the Eagles should have for the Ravens to lose.

• Cardinals at Falcons: The Eagles aren't catching either of these two teams for draft positioning.

• Cowboys at Colts: I mean, root for the Cowboys to lose if you'd like, but it doesn't really matter what they do over the next three games, as they are going to win the division but have next to no shot at a first round bye.

• Seahawks at 49ers: The Seahawks are all but locked in with the 5 seed, and there's no chance the Eagles are leapfrogging the Niners for draft position.