Philadelphia police and the FBI are seeking this man after a robbery of a Citizens Bank branch at 123 Chestnut St. on Tuesday.

Authorities are searching for a suspect in the Tuesday afternoon robbery of the Polonia Bank branch at 2133 Spring Garden St., the sixth Center City-area bank struck since Friday. 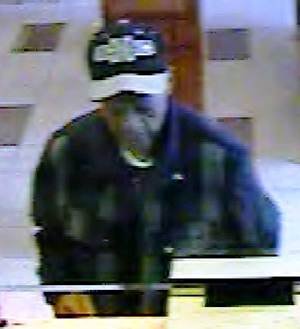 This man is wanted in Tuesday afternoon's robbery of a Polonia Bank branch in Spring Garden.

In none of the incidents was a weapon displayed, though it was implied in the latest robbery, authorities said.

Carrie Adamowski, an FBI spokesman, said the recent rash of robberies is by no means rare, but they tend to be unpredictable.

Adamowski said that there isn't often a pattern to the frequency of bank robberies. But, she admitted that this recent stretch, since Friday, has been particularly busy.

All of the individuals wanted in these robberies are to be considered armed and dangerous, law enforcement officials said. Anyone with information on any of the suspects is urged to call the FBI at 215-418-4000 or to contact the Philadelphia Police Department.

About 2:30 p.m., a man entered the bank, approached a teller, and made a verbal demand for money. He said he had a gun, though no weapon was displayed. After obtaining an undisclosed amount of cash, the subject fled the area of the bank on foot.

The suspect is described as a black male in his 50s, about 5-foot-6 and 160 pounds, thin build. He wore a dark-colored puffy coat, blue jeans, a black baseball cap with white writing, and black and white sneakers.

This subject is considered armed and dangerous. Anyone with information about this robbery or this subject is urged to call the FBI at 215-418-4000 or the Philadelphia Police Department. There is a reward for information leading to this subject’s capture; tipsters can remain anonymous.

On Tuesday, just before noon, a thin, white man – believed to be in his mid-30s, with a thin-build and eyeglasses – walked into the Citizens Bank branch at 123 Chestnut St., and handed the teller a note demanding money. Police said that he fled on foot with an undisclosed amount of cash.

He was about 6-foot-3 and he wore blue jeans and a red jacket at the time of the incident, authorities said. 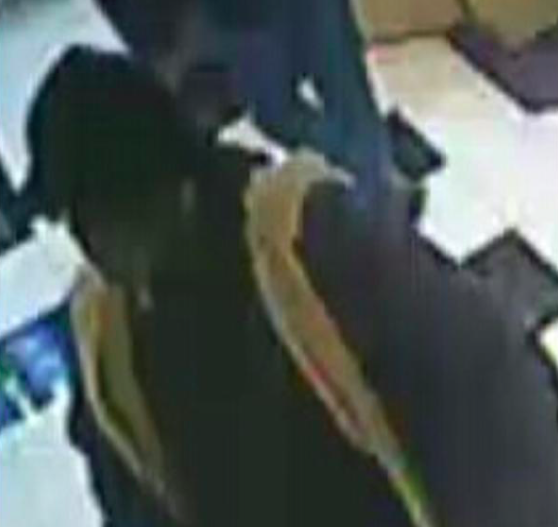 This man is sought in connection with a robbery of a Republic Bank branch at 1601 Market St. on Monday, May 2.

At about 9:15 a.m. Monday, a black male, described as being in his 50s, about 5-foot-10 and weighing about 180 lbs., verbally threatened a teller at Republic Bank branch at 1601 Market St. and demanded money,

The man, who has a salt-and-pepper colored beard and is missing his front top teeth, was wearing a dark hat and dark jeans, a jacket and baseball hat, police said.

The same suspect is wanted in a Feb. 10 bank robbery at a Republic Bank branch at 1818 Market St., authorities said.

This man is sought in the robbery of a PNC Bank branch at 1601 Walnut St. on Monday, May 2.

That same day, a few hours later and just blocks away, a Republic Bank branch at 1601 Walnut St. was robbed after a man described as a white male with a "scruffy beard" walked in about 5:05 p.m. and handed the teller a note demanding money. He then fled with an undisclosed amount of money, police said.

The suspect is described as 25 to 35 years old, about 190 lbs., about 6-foot-1, wearing a charcoal colored jacket, dark shirt, blue jeans, eyeglasses and a knit cap. 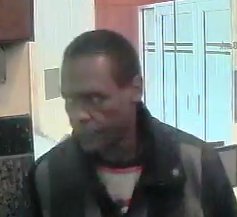 Authorities are seeking the public's help to track down this man after Friday's robbery of a Citizens Bank at 1515 Market St.

Later on Friday, about 1 p.m., a black man verbally demanded money from a teller at a Citizens Bank branch at 1515 Market St. in Center City, according to law enforcement officials

He made off with an undisclosed amount of cash.

The suspect was described by police as being in his late 30s or early 40s, about 5-foot-10, wearing a dark-colored jacket and shirt. 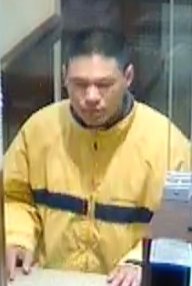 This man is sought by authorities for his suspected involvement in the robbery of a PNC Bank branch at 1849 Walnut St. on Friday, April 29.

The suspect, dressed in a yellow jacket with a black stripe on the chest and blue jeans, then fled with an undisclosed amount of cash, according to law enforcement officials.