Five matchups to watch Sunday night between the Eagles and Cowboys 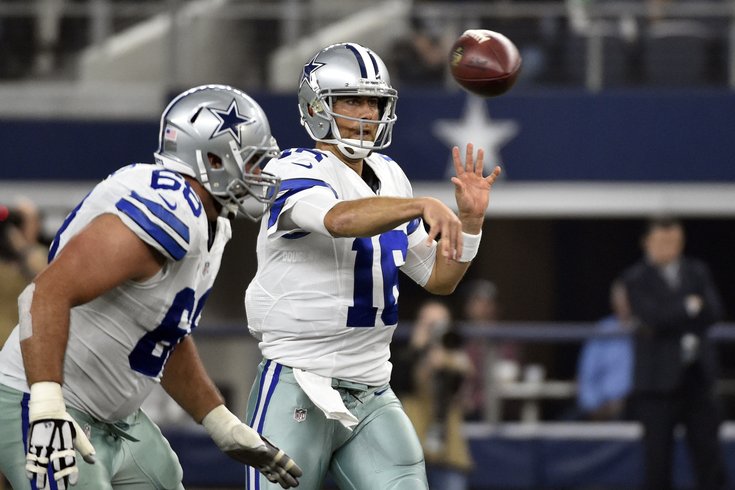 Matt Cassel can't continue to check it down, like he did against Seattle.

The 3-4 Philadelphia Eagles will play the 2-5 Dallas Cowboys Sunday night, and the Eagles will have an outstanding chance to bury Dallas for the season. Here are five matchups to watch this Sunday night.

In the first Eagles-Cowboys matchup Week 2 this season, the Cowboys dominated the Eagles' offensive line, and they didn't even have their best pass rusher, Greg Hardy. In three games so far this season, Hardy has 12 tackles, three sacks, a forced fumble, and an athletic interception of Russell Wilson that almost won them the game. Hardy has a unique blend of power, speed and athleticism for a guy his size (6'5, 280), and he is a disruptive force along the Cowboys defensive line.

Here's Hardy making one of the more athletic tackles in the league (Nate Solder) look like he has cinderblocks for feet:

The Cowboys like to move Hardy around, but he mainly lines up against the left tackle. "I don't have the exact percentages, but he's played predominantly at the defensive end spot, and he's made a lot of damage and hay there," said Chip Kelly earlier this week. "But they have moved him around, so you’ve got to be aware that he's not always going to line up across from your left tackle; he could be inside on the guards. He's been out at the other defensive end also. It's predominantly in one spot, but there is movement and you have to be aware of where he is."

If Jason Peters cannot go this week, the Eagles' offensive line will look like this:

Hardy will be a big test for Lane Johnson, who would be making his first start at left tackle since the Cotton Bowl after the 2012 season at Oklahoma. However, more importantly is how the rest of the line holds up against Hardy, especially Dennis Kelly, will will also be making his first start at tackle since the 2012 season when he was rookie under Andy Reid.

The Eagles cannot afford to have the Dallas defensive line wreck the game the way it did Week 2.

This matchup seems cliché because it's Murray going up his former team, and blah blah blah. However, it really is an important component to this game. In Week 2, Murray ran for two yards on 13 carries. In that game, Murray had runs of -2, -3, -5, -5, and -6. If you wish to re-live those runs in gif form, you may do so at your own peril here. A sampling:

For the whole weird saga of whether or not Murray was injured in that game, check out Matt Mullin's piece on it here. Whether Murray was hurt or not, it's pretty hard to get anything going when Cowboys defenders are dry-humping you the second you get the football.

The Eagles got nothing going in the run game that day, however, other teams have been able to run on the Cowboys effectively. If you take away the Eagles' disgraceful showing Week 2, the Cowboys are allowing 4.5 yards per carry, which would be eighth-worst in the NFL.

If the Eagles cannot get Murray going and establish a rushing attack, I think we've seen so far this season what happens when Sam Bradford has to put the team on his shoulders and win through the air.

3) Dez Bryant and Jason Witten vs the Eagles pass defense

Dez Bryant doesn't have Bradley "Under the Rainbow" Fletcher to pick on anymore. 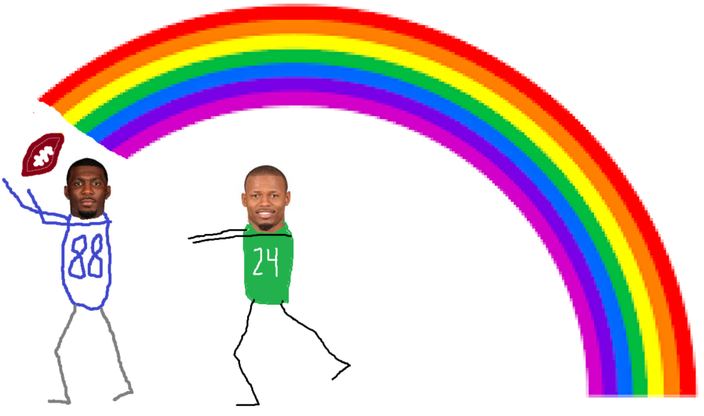 Instead, he'll be working against Byron Maxwell, Nolan Carroll, and perhaps a mix of Malcolm Jenkins and Walter Thurmond if the Cowboys use Bryant in the slot.

In Week 1 against the Falcons, Maxwell was roasted all night by the best wide receiver in the game, Julio Jones. There's no question that Maxwell had a rough game, but the notion that he is some kind of inept corner is ridiculous. Maxwell has played far better as the season has progressed, and Carroll, while certainly not Darrelle Revis, has been a pleasant surprise on the other side.

Last week against Seattle, Bryant made his return to the field, and didn't look like his normal dominant self. The Cowboys targeted Bryant seven times, and Bryant was only able to catch two passes for 12 yards.

The Cowboys' other primary weapon in the passing game is Jason Witten, who had seven catches in each of the last two Eagles-Cowboys matchups, both of which were Dallas wins. Witten has seemingly always done a great job extending drives against the Eagles defense by picking up key first downs. In the past, the Eagles defense was often ill-equipped to cover Witten with their linebackers. Now, they have a slew of good cover backers in Jordan Hicks, Mychal Kendricks, and Kiko Alonso.

Also, the guys throwing the ball to Witten and Bryant is Matt freaking Cassel. This is a matchup I like for the Eagles.

In the first matchup, the Cowboys had a bit of a surprise up their sleeves defensively. They opted to cover Zach Ertz with rookie cornerback Byron Jones.

"He's a good player," said Zach Ertz. "I expect kind of the same matchup. Him or Barry Church on me. I've gone against Barry the last two years. Byron is obviously a rookie; this is my first year going against him. He's been guarding a lot of the tight ends they've gone against -- Gronk, Jimmy (Graham). He guarded me the first game, so I expect more of the same. He's a very good player, and I'm going to have (to be) my best on Sunday."

Jones is a player the Eagles were all over during the pre-draft process. Florida State had 11 players get drafted, and both Chip Kelly and defensive coordinator Bill Davis skipped their pro day to attend UConn's to see Byron Jones. Jones also met with the Eagles at the NovaCare Complex for one of the Eagles' 30 allotted pre-draft visits. That is a hell of a lot of attention to give to one player, but ultimately, the Eagles opted to take Nelson Agholor with the 20th-overall pick instead.

In the first matchup, Jones did a great job on Ertz, as he had just three catches for 17 yards on seven targets. The Eagles need Ertz to be effective as a down-the-field receiving threat to help loosen up the Cowboys run defense. The Cowboys' game plan for Ertz may have caught the Eagles by surprise the first time around. It will be interesting to see how they adjust.

While Matt Cassel has only been sacked twice so far this season, throughout his career he has been sacked, on average, once per every 13.2 pass attempts. In that respect, he's different from other quarterbacks the Eagles have faced this season who were far more apt to chuck it than eat a sack. Here are the quarterbacks the Eagles have faced so far this season, and how often they have taken sacks throughout their careers:

Last Sunday, Cassel attempted just three passes that traveled more than 10 yards past the line of scrimmage. The Eagles will be more than happy to see the Cowboys continue to check it down all game, however, my best guess is that the Cowboys are going to realize they have to take more shots down the field or they simply aren't going to score points. Fletcher Cox, Brandon Graham, Connor Barwin and Co. need to find a way to get to Cassel Sunday night when the Cowboys have more slow-developing plays down the field.