Five over/unders for Eagles vs. 49ers

The Eagles are heavy favorites heading into Sunday’s Week 8 matchup against the 49ers, and for good reason.

At 6-1, the Birds have won five straight and are the lone one-loss team in the NFL. Meanwhile, San Francisco is still looking for its first win after seven losses to start their season.

This is a game the Eagles should win – and most experts believe they will – but this season has already given us a few examples of why that doesn’t mean victory is guaranteed.

Oh, they’re also going to have to deal with thunderstorm conditions. In addition to dampening the field, they could dampen the mood at the Linc – after all, with weather like this could mean all bets are off.

[The column on the right is the chance of rain.] 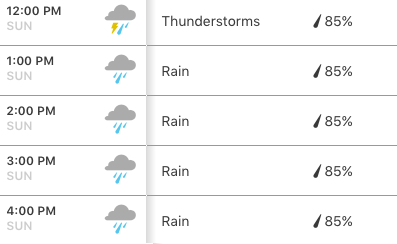 So much for it always being Sunny in Philly.

In that spirit, here are some wet and wild over/unders for Sunday’s game.

That’s the current number being offered over at Bovada. Most Sundays, I’d take the over here, but if you read our weekly predictions post, you already know I don’t see quite that many points being scored.

Aside from the fact that the Eagles have a strong defense and the 49ers are near the bottom of the league in scoring, there’s the weather factor. By halftime, Lincoln Financial Field could look like Lincoln Financial Lake. And if it’s as wet as the weathermen are predicting, then it could be a sloppy, low-scoring affair. As you’ll see going forward, Mother Nature’s role in Sunday’s game is a big theme of this week’s over/unders. As for this one, you already know where I stand.

The Eagles have already done a great job limiting Wentz’s pass attempts this year. In his last five games, he’s thrown an average of about 29 times, compared to the 42 he averaged in his 12 previous games dating back to Week 8 of last season. And I don’t see that changing this week, especially since the 49ers are 30th in the NFL in rushing yards allowed. Add in the wet field conditions that could create a problem for Wentz and his receivers, and it wouldn’t be surprising to see a run-pass ratio similar to what we saw when the Eagles played the Giants or Chargers.

While I don’t see this game being a blowout, largely due to the weather, that’s another way the Eagles can limit Wentz’s attempts in this one. Should they go up by a few scores early, there’s a good chance we see very little out of him the rest of the way. After all, they don’t have Jason Peters protecting his blindside anymore. Why risk it?

With the exception of a three-turnover performance against the Panthers in Week 6, the Eagles defense hasn’t been forcing a ton of turnovers in recent weeks. Fortunately, it hasn’t much mattered as the offense is doing a great job of protecting the ball – they haven’t turned it over more than once in a game since their Week 2 loss to the Chiefs.

On Sunday, however, it wouldn’t be shocking to see the Eagles commit multiple turnovers because of – you guessed it – the weather. On the plus side, they’re facing a rookie quarterback appearing in just his second NFL game and making just his second career start. In his first start, a 40-10 home loss to Dallas, C.J. Beathard lost a pair of fumbles.

And it’s not like it’s going to get easier on a wet field, with a slippery ball, and facing an Eagles defensive front that has a knack for making plays like this…

Originally, I had this line set a bit higher, but I let our resident Eagles expert Jimmy Kempski talk me down to 75.5 after he reminded me that the Eagles have the best run defense in the NFL, averaging just 67 yards allowed per game. It’s not like I had forgotten just how good Jim Schwartz’s unit has been against the run, it’s just that I think the 49ers are going to run the ball more often than the Eagles have gotten used to in recent weeks.

See, while they may be allowing the fewest yards per game, the Eagles are also seeing the fewest rushing attempts of any team in the league. When you look at their yards/attempt number, they’re 11th in the NFL at 3.8. That’s respectable, just not nearly as dominant as their per-game numbers would suggest. And while the Niners haven’t been great on the ground this season, that’s largely due to a lack of attempts. They’re tied for ninth in the league in yards/attempt (4.3), the same number as the Eagles. But when it comes to yards per game, the 49ers (96.0) are 23rd in the league, while the Eagles (131.7) are fourth. So it’s not like they can’t run the ball.

So why do I think they’ll run more against the Birds this?

I guess the answer to this question depends on how you feel about two things:

Given that I don’t think Wentz is going to throw the ball a ton, especially not deep, I don’t think the 49ers will get too much pressure on him. They’re also not great at sacking opposing quarterbacks, tied for 20th in the league with 14 in seven games. I think we’ll hear it once. Any more than that, and it’s a bad sign for the Eagles.