Five off-the-radar Eagles who are having good training camps 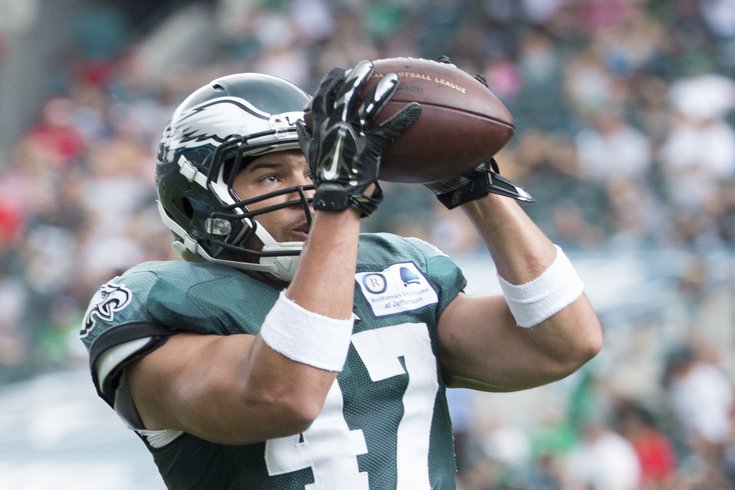 Philadelphia loves an underdog story, and a number of lesser-known names have stood out during Philadelphia Eagles training camp this year. Here are five guys who have made strong cases for themselves to either make the team, or in the case of Trey Burton, play a lot this season.

Every day, Trey Burton does several awesome things. On Wednesday, for example, he did a great job selling that he was staying in on pass protection before leaking out into the flat where he was wide open. After bringing in the pass, Burton sprinted upfield and ran over CB Ron Brooks, who was at least able hang on and bring Burton to the ground. After the play, Brooks stayed on the ground for a few moments, before slowly jogging off the field.

Burton was also the recipient of a deep ball down the sideline from Carson Wentz, and made a pretty catch in the back corner of the end zone in which he skied for the ball and got both feet in. Burton is balling, every single day. Very simply, he's just a very good football player.

At this point, Burton probably isn't off the radar at all to some of the more intense fans, but we included him here because he never got the playing time in the past that he should have. This year, he's going to play. Bank on it..

Coming out of college at Michigan, Martin was a highly athletic, but undersized defensive tackle. He put up extraordinarily impressive numbers at the 2012 NFL Combine:

After a decent rookie season with the Tennessee Titans in 2012, Martin's productively has been nearly non-existent. In 2015, he played five games, and then did not appear at all in eight straight games before being placed on injured reserve at the end of the season.

So far this training camp after being a very under the radar free agent signing, Martin has been very active, and may see a significant number of snaps as a reserve behind Fletcher Cox and Bennie Logan.

Undrafted receivers don't make rosters as often as you might think, and there may not be room for one this year, but Turner has made a boatload of catches working the middle of the field. He's been so active that the coaches rewarded him with some first team reps.

Gordon was a TE at LSU, where he had 7 career catches and was used primarily as a blocking TE. With the Eagles, he has played OT, OG, TE, and FB, and has looked good at every spot. In Wednesday's practice, he buried Bennie Logan on a trap play, and won his matchups in 1-on-1's..

Marshall has better receiving skills out of the backfield than many of the Eagles' running backs, and to my surprise looked very good in pass protection. If Marshall shows well in the preseason games, he could be a versatile piece that sticks the team among an underwhelming group of running backs.