With Mathews and Smallwood sidelined, it's Kenjon Barner's time to shine 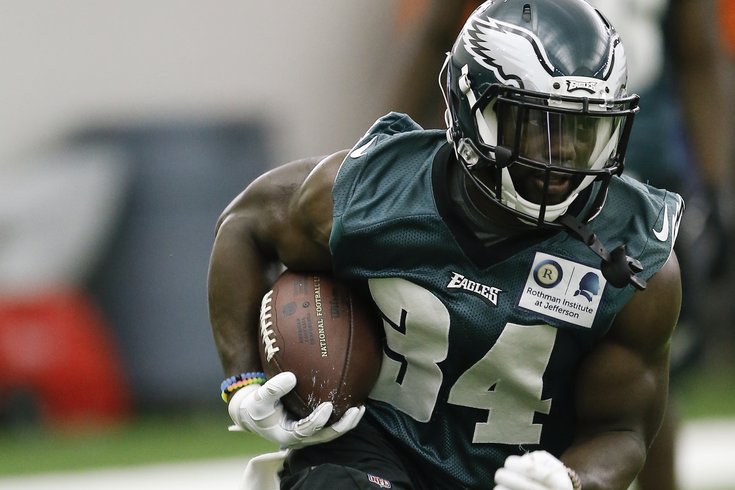 "He's an explosive guy with the ball in his hands," Pederson said Wednesday. "Pretty good out of the back field as a receiver. That's one area that he can improve there: route-running ability. But I love the fact that anytime you put the ball in his hand, he has the ability to make some big plays for you. He's shown that here in the first week of camp."

On Wednesday, Barner capped off the first team's final drive of practice with a short touchdown run. It wasn't a pitch. Nor was it a QB option. And it definitely wasn't a sweep. The 27-year-old took it right up the gut, hit the hole and found the end zone.

"Kenjon, I think is a really good, all-around back," Reich said Monday when asked to assess the running back position. "He can make you miss in the open field. I like his vision. He's doing great in protections. I've been very impressed with him the whole offseason. Of course, when we got here everyone was in my ear about how good this guy is going to be a player, and that's what we're seeing."

After missing all* of 2014 due to injury, Barner carried the ball just 28 times in 11 games last season and has yet to score his first NFL touchdown (although he has scored in the preseason, including a pair of punt returns a year ago). However, he has temporarily slid up the depth chart with Mathews and Smallwood out -- the former has yet to practice but is expected back by the end of this week, while the latter is day-to-day.

*Barner was not "injured" all season, but after going down in camp, he was relegated to the practice squad and didn't appear in a game all year.

Their absence has provided Barner a chance to show his rookie head coach why his being in Philadelphia goes beyond the previous regime's fairly obvious Oregon bias.

"I thought he handled [the added workload] well," Pederson said. "His conditioning is good. It's improving. He got a little tired towards the end of practice, but, again, that's just the nature of the camp practice. But overall, I thought he did a good job. This will be a good film for him to watch: a good practice tape for him to watch to be able to make the necessary corrections. But he’s headed in the right direction."

If Pederson's managerial style is anything like that of his predecessor, it will be RB coach Duce Staley making up the in-game rotation for running backs. And without a traditional workhorse -- like what DeMarco Murray was expected to be last season -- it's safe to assume that there will be plenty of carries to go around for all the guys in the backfield.

At least, that would be the smart way to go about it.

Each of the Eagles' top four running backs -- Mathews, Darren Sproles, Barner, and Smallwood -- should have been handed to Pederson with similar, but slightly different warning labels.

•  Mathews: Overuse may cause injury.
•  Sproles: See expiration date. [Also, more important in other areas].
•  Barner: Too many carries my result in lack of production.
•  Smallwood: Not quite ripe ... yet.

Essentially, putting too much of the workload on any one of these backs will likely be disastrous. But if they spread the ball around, not only will throw off opposing defenses, but it will also help keep all four of these guys healthy as the season goes on.

But for now, as he tries to prove he belongs in that rotation, Barner will take all the carries he can get.