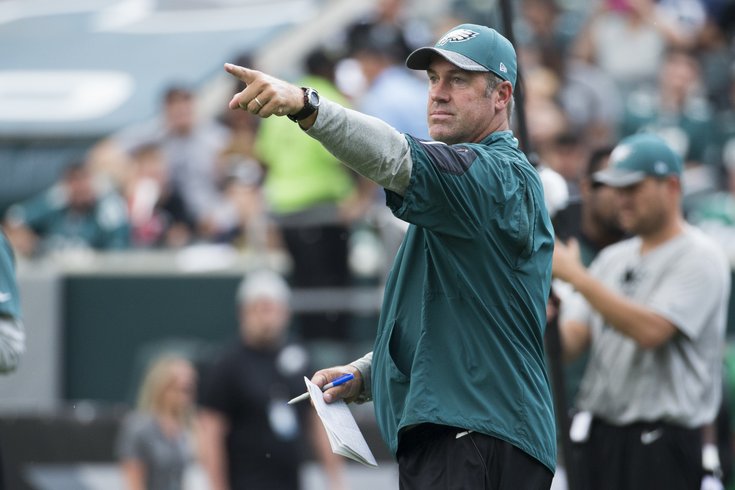 For the last three seasons, Eagles players had become accustomed to playing what can best be described as rough-touch football during practice.

All week, players were prevented from tackling others all the way to the ground. And then on Sunday, when the intensity was at its highest, they were expected to suddenly flip a switch and return to tackling the opposition. But like any part of the game, tackling takes practice -- if you don't do it on a regular basis, how can you be expected to be any good at it?

The results, more or less, played out on the field. It's hard to describe this team as anything other than subpar tacklers under the Chip Kelly regime. And while that may have prevented a handful of practice injuries, it certainly had a negative effect on the defense overall.

He feels that tackling in practice is crucial for several reasons, something he was asked about following a Wednesday session that featured live tackling for the first time this summer.

"Yeah, today was the first day that I had two live periods in practice and I felt like the energy was good and the competition was good," Pederson said. "Anytime you do a short yardage and goal line situational football like that, the best thing to do is to go live. The guys like it and they responded well."

It's true. These practices may leave some guys hurting a little more than last year, but they seem to prefer these.

"Of course [the defense likes it]," said defensive end Connor Barwin. "That's what we do. We like hitting so we always enjoy when we go live."

So, despite the injury risk, why does Pederson have his guys go full speed in practice?

"It's tackle football and it’s a physical game," he said. "The other thing about it, too, is it’s that competition. It's just knowing that we're actually going to put the pads on and go to the ground today. Because most of our periods are a fast-tempo thud where everybody's kind of staying up. But this is the first time that outside of [cut blocking] our own players, being able to tackle and really drive through guys, I think it's so important to be able to do that and be in the right position and the right place defensively. Offensively, you know, hat placement and where they're going to be, it just makes a difference. The tempo of that practice intensifies during those live periods."

That was certainly the case at the NovaCare Complex on Wednesday. It was by far the most lively practice of camp to this point.

"When you go live, people are competing and the competition level is going to go up," Barwin said. "Obviously, you get some work tackling, some work hitting, but again, it kind of just picks up the whole energy for practice."

"That's what you love to see," Pederson added when asked about the intensity during those live sessions. "That's the competition, and that's what makes you better. This is the time of the year where you really get to see who is going to be with you and who you can take to the regular season. We had some good performances out there today."

It also seems like this is more likely than not going to be the case going forward.

"I felt like we started camp a little bit slow tempo-wise, but we've picked it up here in the last couple days," Pederson added. "This is going to be a nice little stretch for the guys. We've got these six days coming up and it's going to be pretty intense and pretty physical for them. So we'll get a better test of where they're at in a week or so, but I'm pleased with where they're at and where they're headed."

We'll see if this translates to better tackling on the field when the Birds host the Bucs, one week from tomorrow. And no, that's not a typo.