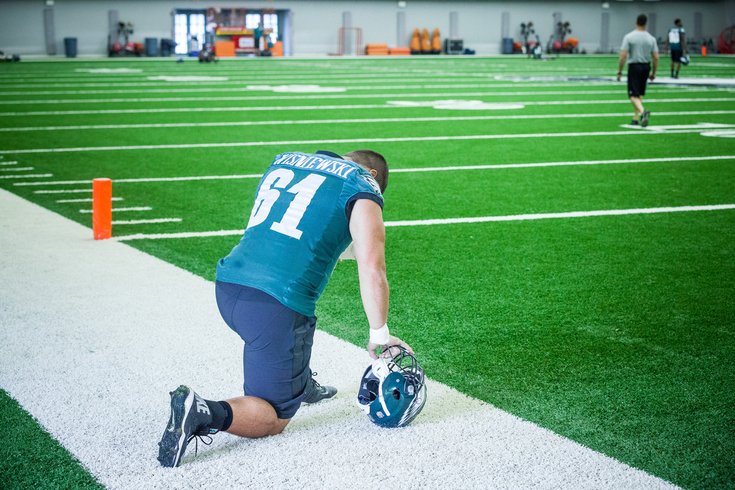 From literally the first snap during team drills in padded practices at Eagles training camp, Stefen Wisniewski has stood out at his temporary RG spot with the Eagles' first-team offensive line. Here's what we wrote about him in our practice notes earlier this week:

On the very first play during 11-on-11's Stefen Wisniewski set the tone for the day when he absolutely blew up Bennie Logan right off the snap. It's rare that an offensive lineman will get ooh's and ahh's from the season ticket holders in attendance, but Wisniewski did just that.

With free agent acquisition Brandon Brooks nursing a hamstring injury, Wisniewski was promoted to the first-team offense to play in Brooks' RG spot. Wisniewski has shown a mean streak, and has very clearly played well.

After signing with the Eagles in April, Wisniewski was bluntly honest when he said he is looking forward to free agency next season. His hope is to play well this season in Philly, and then cash in on a lucrative deal somewhere, whether that be with the Eagles, or elsewhere. According to Wisniewski, it was his choice to sign a one-year deal.

"I wasn't getting the kind of money I was looking for in a long-term deal, so I kind of wanted to sign a one-year deal and get back to being a free agent again," he said after signing, while adding that his former team, the Jacksonville Jaguars, tried to low-ball him.

To get paid in free agency next offseason, Wisniewski is going to have to get on the field. So far through camp, he's playing like a man motivated by making the most of his financial opportunities in a sport where players have short shelf lives.

Over his five-year career in the NFL with the Raiders and Jaguars, Wisniewski has only missed three games, while compiling 77 total starts. He has never entered a game as a reserve.

"He's a veteran guy and has got a lot of starts in the National Football League," said head coach Doug Pederson. "It's not too big for him. He's picked up the system. He’s a smart kid, and somebody that is definitely going to fit into the mix in the rotation at guard for us. As you know, this is typical of a regular season. Those guys that get nicked up and miss a couple days, you know, the next guy steps up, and it's that mentality and he's done a nice job handling that."

Pederson added that Wisniewski will see action at both guard spots. When Brooks returns from his hamstring injury, the RG spot will be his once again. However, if Wisniewski keeps performing the way he has, it's going to be hard to justify keeping Allen Barbre ahead of him at LG.