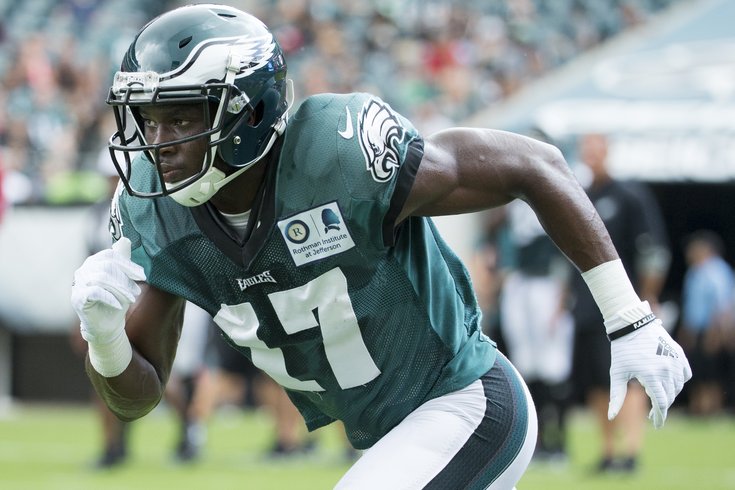 Philadelphia Eagles wide receiver Nelson Aghonlor may benefit from playing in an offense that isn't run by Chip Kelly.

On Monday, it was offensive coordinator Frank Reich's turn to address the media following another day, albeit a much cooler day, of Eagles training camp practice.

Like rookie head coach Doug Pederson a day earlier, Reich said he's pleased by what he's seen so far out of rookie Carson Wentz, who also drew praise from the guy he's eventually going to replace under center, Sam Bradford. But with so many question marks across the board on the offensive side of the ball, the second-overall pick's progress through the first week of camp was only a small part of Reich's comments.

Here are five other important things he said on Monday...

On offense, the Eagles receiving corps is one of the areas with a lot of question marks. Beyond Jordan Matthews -- and it's not like he's without questions of his own -- there aren't a ton of great options. But, at least they're excited to be out there, I guess?

"The receiver group has a lot of energy," Reich said. "One of the things you look for in a receiver group is an unselfishness, because that's the way you get better. There's only one ball, and there's three, four guys going after a route, so we want to be able to evaluate every play all the time, whether the ball's coming to them or not. And I've always found over the years that you can get a lot out of evaluation even in a short period of time.

"You want to see an unselfishness just in their attitude and you’re kind of pulling for the other guys and the excitement and energy. And then there’s always that -- part of the evaluation process is, ‘Can you run all day? Can you run all day and can you go when you're tired?’ That's what we're in the process of getting into right now."

While that's great and all, how are their hands looking. We don't want a repeat of all those dropped balls we saw last year -- and I'm sure Bradford agrees.

"Well, as a coach, you don't want any drops, so, no," Reich said when asked if they were catching the ball how he would like. "You want 100 percent catches. So, yeah, that's something that you've got to improve. We've always got to demand the best of ourselves. We expect perfection."

2. HOT OFF THE PRESS

Reich was also asked specifically about wideout Nelson Agholor and if he thought the second-year player could, as many other receivers have, see a drastic improvement in year two.

"I think there is something to that," he said. "You see that in receivers, and I think a lot of that is just a confidence and the game slows down. Those two go hand in hand. So, we've said it all offseason that that's our expectation of Nelson. One thing that does pop up on the film, even just in a couple practices here with the pads on, he's got a quickness off the line of scrimmage, he has some vertical speed to challenge it deep, and he just has very good footwork. In this league, you have to be able to beat press coverage. You have to, have to, have to beat press coverage. And he has a natural ability to get off the line versus press, and he's got to be able to use that to his advantage to help our team."

So why didn't Kelly and his coordinator, Pat Shurmur, put Agholor in more opportunities to go up against a press corner? Reich watched the film and his belief is that it had more to do with Kelly's uptempo system than it did with Agholor.

"I will say this, the film that I saw last year I saw flashes of it," Reich continued. "So, we come in and I said, ‘This guy can beat press coverage. He can get off the line of scrimmage versus press coverage.’ So, I didn't really get into evaluating their scheme and what they were trying to do a whole lot, but you could see flashes of it.

"And a lot of times when you’re in that tempo offense that they were in you don't get quite as much press coverage, they play a little softer just trying to get lined up because they were going so fast. I would anticipate he'll have more opportunities to do that this year."

And after hearing Reich immediately identify that as the problem, it should give some renewed hope to those fans who are down on the first-round pick following a subpar rookie season (23 catches, 283 yards, TD).

Wentz wasn't the only Eagles QB to be praised by his coordinator on Monday. Reich had some very positive things to say about Bradford as well.

"His accuracy, timing," Reich said when asked what about Bradford has impressed him the most. "I think one of Sam's strengths -- he's got many -- but he keeps it really simple. It's not because he has to, it's because that's the best way to play football. You want to have a sophisticated understanding of everything, but yet still keep it simple, and that's really what we try to teach and engrain in the guys.

"When you teach a system and when you teach all the options that are available, you tell a quarterback, ‘Here are all the options; here's the progression; here’s all the protection checks.’ But his job is to keep it simple, to see the coverage, but yet to narrow it down in his progression, because at the end of the day, it's about match-ups. It's about finding little windows. And I think he has a very instinctive and natural way of doing that, and then he's accurate with the ball."

When asked later about keeping it simple, Bradford said that it's all about keeping his head free from distractions and just focusing on the play at hand, allowing you to "react on the fly" rather than focusing on complex play calls because as a quarterback, "you're in charge of making decisions every play and there are a lot of different variables that affect that decision."

Another of the spots on offense where depth is questionable (to say the least) is at the running back position. Reich, however, seemed more than pleased by his current backfield. And while they're all relatively similar in size, he sees them as each bringing something different to the table.

"I think [Wendell] Smallwood maybe has a little more size to him, but I think he has really good vision," Reich said. "He's patient in the hole, but then he's got speed through the hole. Kenjon [Barner], I think is a really good, all-around back. He can make you miss in the open field. I like his vision. He's doing great in protections. I've been very impressed with him the whole offseason. Of course, when we got here everyone was in my ear about how good this guy is going to be a player, and that's what we're seeing.

"[Byron] Marshall has really showed me a couple things here the last couple days. I think he has natural running ability in the open field. He's very elusive, and you see good instincts and vision by him. Ced's [Cedric O’Neal] got a little more size to him; plays a little bigger; plays a little more stout. And then of course Ryan's [Mathews] not been on the field yet, but it's a good group. It's a good group.

Wait, isn't someone missing from that list of players?

"[Darren] Sproles is, I mean, Sproles is Sproles," Reich added. "He's the best."

One of the biggest differences between Chip Kelly's practices and those we've seen so far this summer under Doug Pederson is -- get ready for a shocker here -- the speed at which they're run. Like everything Chip seemed to do, they moved quickly. So quickly, in fact, that there was no looking back.

While that have helped players become accustomed to how they were going to play on game day, it allowed for little-to-no in-practice correction. You rarely, if ever, saw a coach pull a player aside during team drills and actually teach him something. They would try to fix it on film later, but as the proverb goes...

[Marco Polo on Netflix, an underrated show that's worth your time. But only after you watch Stranger Things. Definitely watch that first.]

This year, however, there has been a lot more teaching going on during practice, and that Pederson's whole philosophy.