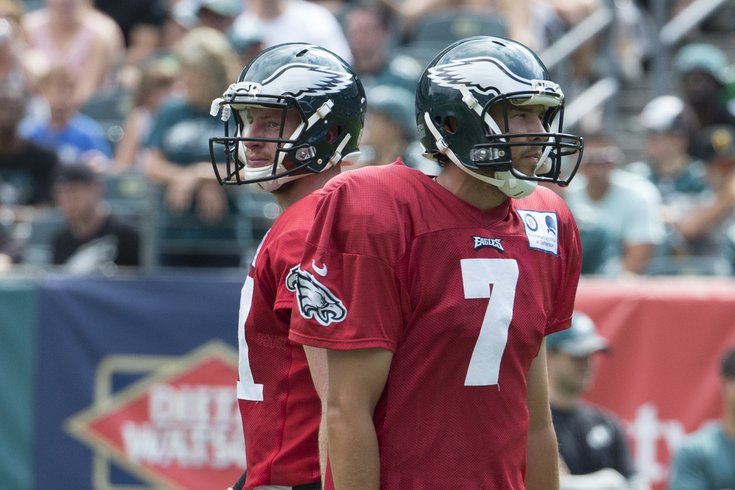 Carson Wentz and Sam Bradford will face each other when the Vikings visit the Linc in Week 7.

On Sunday, the Philadelphia Eagles held their first open practice of training camp at Lincoln Financial Field. And if you didn't know any better, you might think it looked exactly as you'd expect.

But you do know better, which is why it was painfully obvious that the crowd was smaller -- much, much smaller -- than it had been in previous years. Last year, at the team's second open practice, the one held on a Sunday, there were close to 43,000 fans in attendance.

Did some scouting at Eagles training camp today pic.twitter.com/0ldxvLUfRR

This year? Not so much.

A relatively light crowd at the Linc for #Eagles practice. Weather could have some reason: pic.twitter.com/iM7dVGSi1O

Although the weather forecast was iffy in the morning, it turned out to be a beautiful day, all things considered. And sure, the absence of Chip Kelly and a subpar finish to the 2015-16 season has taken some of the national attention away from the Birds, but as a far as local fans are concerned, there was plenty of reason to take in some (free) late-July football on Sunday.

I mean, even the Phillies are averaging close to 25k fans per night...

Despite the relatively low turnout -- and I say relatively because 18,000-plus is still a good amount of people -- quarterback Sam Bradford was feeling the love at the Linc, even though he knew fans were probably more excited to get their first glimpse of Carson Wentz in person.

"I think, obviously, I knew there would be a lot of excitement for everyone to see him," Bradford said following practice on Monday. "But I thought it was great yesterday. Anytime we can get over there and get in front of our fans and practice, it's fun. It changes it up a little for us, kind of takes away some of the monotony of being over here and, no offense, practicing in front of you guys every day."

And as for those "We want Wentz" chants that broke out after practice?

"We want Wentz" chants at #Eagles practice at Linc today. Carson says he was "surprised" how many fans showed up pic.twitter.com/nGCMqC9JFl

*It's worth noting that a decent amount of those fans were from North Dakota (or, in other words, Wentz fans and not Eagles fans)

"Like I said, he was the second pick in the draft, there's going to be excitement about that," Bradford added. "I think it's good. It's good for this team. It's one of those things I've got to deal with and I don't think it's that big of a deal at all, to be honest."

For the first time in what seems like forever, Bradford is entering camp without injury after playing nearly a full season the previous year. But that doesn't mean things are going to be any easier this time around. Not with all the drama from earlier this summer combined with Wentz now waiting in the wing.

When asked how he's dealt with all of that heading into the 2016 season, the 28-year-old's answer didn't sound all too different from what you might have heard him say last season when he was battle back from his second torn ACL.

"Just control what you can control," Bradford replied. "At the end of the day, that's all you can do. That's really kind of been a mantra of mine for a while. But each day just come out and give your best -- try to get better, try to help this football team -- and don't worry about everything else, because there's a million other things going on outside this building, outside this team that no one else in this locker room has control of. So really just controlling what I can control."

One of the things Bradford can't fully control, but can play a crucial role in, is Wentz's development. On Sunday, Pederson spoke about not only what he's seen from Wentz, but the interactions between the three quarterbacks expected to make the team out of camp.

So just how has the rookie QB impressed his rookie head coach?

"You know, the way he's handled himself on and off the football field," Pederson said. "The way he's executed and sort of assumed his role now, where he's at and the learning -- sort of the learning curve where he's at. Some of the plays he's made yesterday and through rookie camp, some of the -- there's a couple of ‘wow’ plays that you just go, ‘That's the kind of quarterback that you know you have.’

"He's right on track, where we want him to be. He's competing every day. He's learning in the room. He's asking great questions in the room. Chase [Daniel] has done a great job with him and learning as well with Sam [Bradford]. I like where he's at right now."

"Carson's been good. He's had a great start, in my opinion," Reich said. "His grasp of the offense is as good as you can expect for this time. Fundamentally, he looks rock solid. He’s always getting better and he’s throwing the ball well. So, very pleased with his progress."

Even Bradford agrees, although he must subconsciously understand the inverse correlation between Wentz's improvement and his own grasp of the starting quarterback job. The better Wentz looks, the less secure Bradford's job become.

Still, that didn't stop the former Heisman winner from praising his backup for how he's improved since being drafted in June.

Let's see if he still speaks as highly of his inevitable replacement once the regular season rolls around.

"We want Wentz" is going to sound a lot different – and potentially more hostile – when it's coming from 65,000 fans.