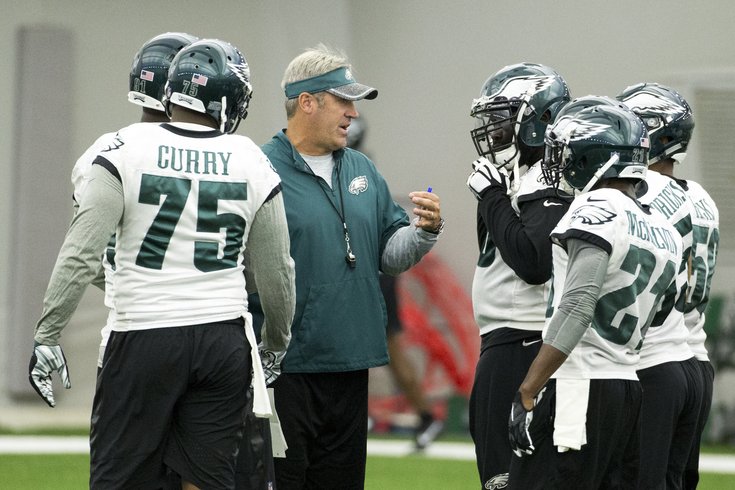 Vinny Curry could have a breakout season under Jim Schwartz.

For the first time in Philadelphia Eagles training camp since 2012, the Eagles tackled during 11-on-11 sessions, and there was a ton of action. I tried to focus my attention on the offensive and defensive lines, since they're not as easily evaluated in shorts. There are a lot of notes, so let's just get right to them.

• Vinny Curry was a menace during a "live" (tackling) goal line session. He was able to get penetration three times, blowing up plays in the backfield. He destroyed two run plays for a loss of yards, and got to Chase Daniel for a sack on a play action pass. This defense suits Curry's skill set, where he can just put his head down and get into opposing backfields.

• On the aforementioned Curry sack, Daniel still threw the ball, and it was a beauty to the back corner of the end zone to Trey Burton, who made a leaping grab and was able to keep both feet in for the "score," although, again, Daniel was sacked.

• Burton has had a tremendous camp, and that was no different today. On one play, he did a great job selling that he was staying in on pass protection before leaking out into the flat where he was wide open. After bringing in the pass, Burton sprinted upfield, and laid down the truck stick on CB Ron Brooks, who was at least able hang on and bring Burton to the ground. After the play, Brooks stayed on the ground for a few moments, before slowly jogging off the field. He got the worst of that collision.

Burton was also the recipient of a deep ball down the sideline from Carson Wentz.

One more Burton note -- If you've ever watched a Jon Gruden telecast for more than 8 seconds, you've heard him talk about "Spider 2Y Banana," which is a play Andy Reid used to run with the Eagles for years. Here's Gruden explaining "Spider 2Y Banana" to Marcus Mariota:

The Eagles have run that quite a bit with Burton as the FB.

• We're stating the obvious here, but Fletcher Cox is really, really good. The best aspect of his game is power, as we've seen, but he also wins with speed. On one play he beat RT  Dennis Kelly around the edge for a sack. I didn't notice if Fletch lined up at DE or if the Eagles ran some kind of stunt, but the way he got the corner at 300+ pounds was very impressive.

• Two unfamiliar occurrences today: Sam Bradford checked to a new play at the line of scrimmage, and he also ran play action a few times. It was almost like we were watching a pro offense. On one play-action pass, Bradford hit a streaking Kenjon Barner down the sidelines.

• We've been critical of Barner throughout camp, but he had a big day today. In addition to the aforementioned long ball he caught, he looked very good in pass protection drills, and showed burst as a runner.

• While Barner was good in pass pro, the guy who really stood out, to my complete surprise, was undrafted rookie RB Byron Marshall. On consecutive reps, he stoned Mychal Kendricks and Jordan Hicks. Kendricks is one of the better blitzing linebackers in the NFL (seriously). At Cal, Kendricks had 8.5 sacks one season. Over the last three years with the Eagles, he has had 11 sacks.

Marshall drew enthusiastic praise from RB coach Duce Staley, who was outstanding in pass protection when he played.

• The one player I was looking forward to seeing in pass protection drills was Wendell Smallwood, who struggled mightily in that facet in college at West Virginia. Unfortunately, Smallwood missed today's practice with a quad strain.

• Rodney McLeod laid a few nice pops on receivers trying to catch balls over the middle of the field. He also had a sliding interception on a ball that was tipped at the line of scrimmage by a blitzing Malcolm Jenkins.

• Anyone know who Dillon Gordon is? Well, he's an undrafted tight end out of LSU who had a grand total of 7 catches over his college career. The Eagles brought him in, gave him number 69 and converted him into an offensive lineman.

Gordon was awesome today. Early in practice, while playing fullback, he pancaked Bennie Logan on a trap play. During 1-on-1's, Gordon OWNED Marcus Smith. When Smith's initial pass rush move didn't work, he had no answers, and Gordon just kept hitting him. It was probably the most lopsided of the OL/DL 1-on-1 reps all day. The rep ended with a frustrated Smith shoving Gordon (and Gordon still not really even moving).

Since the Eagles signed him, Gordon has played OT, OG, FB, and TE. Pencil him in for the practice squad.

• Stefen Wisniewski had another really good day. He won his battles in 1-on-1's, and buried what looked like a linebacker (I didn't catch the number) downfield on a screen. Wisniewski is getting reps with the ones while starting RG Brandon Brooks is out nursing a hamstring injury. Wisniewski is making the most of that opportunity, as he has stood out.

• Logan mostly won his battles in 1-on-1's as well. He attempted a spin move that worked against Isaac Seumalo. That's the first time I've ever seen Bennie do that. Seumalo was also beaten rather easily by Cox.

• Another defensive lineman who had a great day was free agent acquisition Mike Martin, who got penetration a few times in goal line sessions. However, the one moment that stood out to me was during 1-on-1's. Facing off against Allen Barbre, Martin smacked the crap out of Barbre's hands, and was easily able to get around him quickly for a sack. Hand technique is so important for defensive linemen, and Martin showed some nice skills there today.

• On one rep, it appeared as though Cox got under Malcolm Bunche's pads and drove him back into the pocket, which drew comments about how dominant Cox is. However, on a closer look, it was not Cox. It was Aziz Shittu, the undrafted DT from Stanford. Cox (91) and Shittu (61) have similar numbers, hence the confusion. Shittu showed impressive strength on the play. Bunche, not so much.

• Jason Peters took a bunch of reps off again today, and didn't participate at all in 1-on-1's.

• Eric Rowe had a decent day. Rowe is a good tackler, so practices in pads play well to his skill set. On one play, Rueben Randle caught a pass out in the flat, but Rowe closed in quickly and stoned him for a short gain of one.