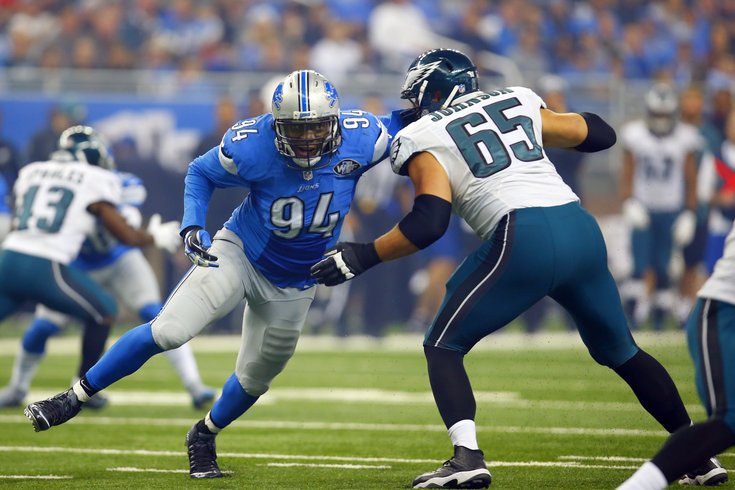 The Eagles' offensive line should be better prepared for their Week 1 opponent than they were a year ago.

Over the last three seasons, the Eagles have run a 2-gap scheme along their defensive line. What does that mean? The quick answer is that defensive linemen under Chip Kelly and Billy Davis had the responsibility of two gaps, shown below.

The Eagles' defensive linemen were to engage with the blocker in front of them and control the gap on each side of him.

In a one-gap scheme, defensive linemen have the responsibility of just one gap. They are asked to penetrate through their gap and create disruption in the backfield. For example, here's an oversimplified look at a one-gap scheme:

The vast majority of NFL teams run 1-gap schemes. Unfortunately for the Eagles' offensive line, however, they faced a 2-gap defense during training camp the last three seasons, and it left them somewhat ill-prepared for their regular season opponents.

"Whatever you go against the most, you’re obviously the most comfortable with, and that’s also going to be what your defensive players are best at running," said Andrew Gardner, who started at RG last season before getting hurt.

"Like last year obviously, we ran against the 3-4 with more 2-gap the most and our backups running scout team, that’s what they were the best at doing. So I think it’s kind of the same no matter what you’re doing. I would imagine there will be a bit of adjustment this year when we go back to playing somebody that maybe runs a 3-4 under or a true 2-gap defense."

In the season opener against the Atlanta Falcons, the offense sputtered in the first half, and the Falcons' penetrating-style defense gave the Eagles fits. For example:

"I think that especially in the opening game against Atlanta it took us a little bit to get used to that right away," said Jason Kelce. "When you practice things the same way over and over and over and over again, and then you get something completely different, the little nuances change up just a little bit. Especially that first game in Atlanta, we did not adapt well as an offensive line until the second half came rolling around."

This year, the Eagles are running a 1-gap scheme defensively, which is of course what the Eagles' offensive line will face on a daily basis throughout training camp.

By my count, among the Eagles' opponents in 2016, only the Pittsburgh Steelers and Green Bay Packers run a 2-gap style of defense. In other words, the Eagles will be mostly playing against teams running similar 1-gap schemes that they'll see in practice every day.

"I think this is going to help us," said Lane Johnson. "It’s going to give us an (edge) because we’ve been playing against 2-gap the past three years, and now we’re going against this, so that will give us well-rounded edge for our offensive line."