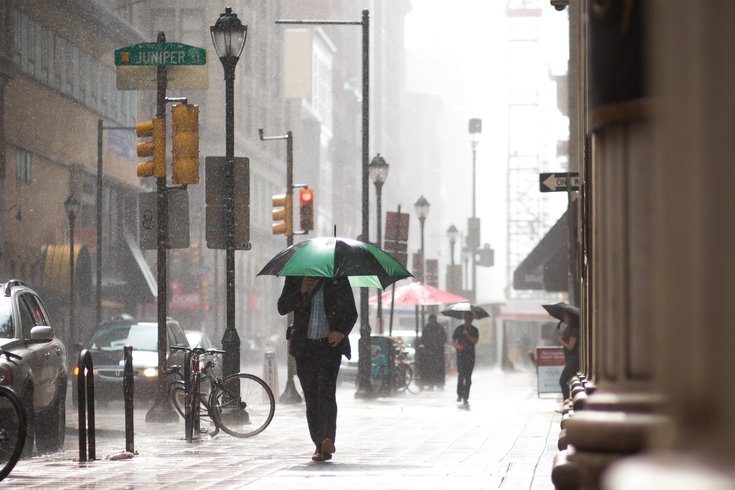 An afternoon thunderstorm in Philadelphia.

It's a good weekend to catch up on whatever Netflix show you've been meaning to binge.

A "rare storm for late July" is heading toward the Philadelphia area this weekend and is expected to bring along heavy rains and the threat of flooding, according to AccuWeather.

Forecasters are calling the storm "unusual" since it's expected to "unleash steady rain for 6 to 10 hours or more," while storms more consistent with this time of year come and go after a few hours.

The National Weather Service has issued a flash flood watch in effect from 2 p.m. Friday until Saturday afternoon for Philadelphia, South Jersey, eastern Maryland and Delaware, too. Heavy fog is set throughout Friday morning for the Poconos, with lesser rain expected to dampen weekend plans.

The rain will hit the Philadelphia area Friday afternoon but is expected to pick up at night, with 1 to 2 inches of accumulation possible. 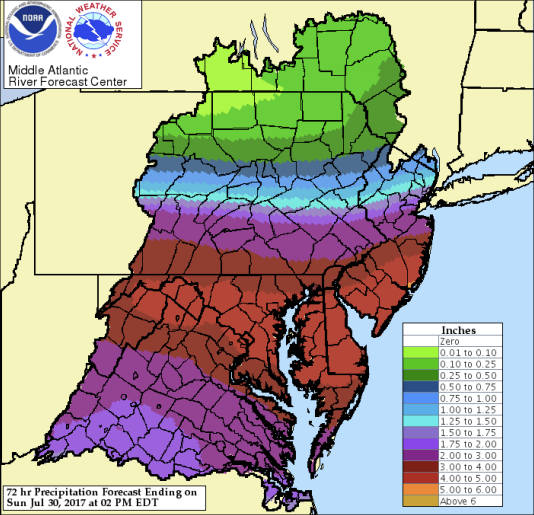 Plans to head to the shore this weekend? You may want to reschedule. The rain hitting Philly will migrate to the New Jersey beaches and is expected to hit them harder – up to 3 inches could accumulate Friday night, with 1 to 2 inches possible Saturday.

The impact of heavy rain and flash flooding will be significant throughout Philadelphia and South Jersey, according to the NWS.

The good news is that the downpours will bring a bit of a cool down starting Sunday, with highs expected in the 80s and lows in the mid-60s.

The weekend forecasts for the city, shore and Poconos are listed below, per the NWS:

Friday: Chance of storms and thunderstorms most likely after 2 p.m., with a high of 85 expected before temperatures drop to 69 degrees. Rainfall amounts at night could total 1 to 2 inches.

Saturday: Winds will pick up to nearly 20 mph, with rain accumulating between a half and three-quarters of an inch. The high during the day will only reach 73 degrees before the mercury dips to 63 at night. Rain will be steady throughout the day but should pick up after 8 p.m., when an additional quarter of an inch is possible.

Sunday: The sun will peek out, warming the Philadelphia area up to a high of 79 degrees. The low is expected to reach 64 at night.

Friday: Thunderstorms possible after 2 p.m., with a high near 79 degrees. Showers and thunderstorms most likely after 9 p.m., with 2 to 3 inches of rain expected. The low should reach 71 degrees. Winds will be steady around 5 to 9 mph.

Saturday: 1 to 2 inches of rainfall expected throughout the day, with a high near 77 degrees before dipping to 66 at night, when the region could see an additional half inch of rain. Winds could pick up to 36 mph at night.

Sunday: Slight chance of showers in the morning and night, with winds expected to linger around 23 mph. The high will reach just 77 degrees, while the low is expected to drop to 66.

Friday: Dense fog will clear up around 10 a.m. and will make way for sun and a high near 80 degrees. Chance of showers and thunderstorms expected between 10 p.m. and 3 a.m. that could bring up to a half inch of rain. Friday night's low should hit 61 degrees.

Saturday: Mostly cloudy with a chance of showers and high of just 67 degrees before the low drops to just 56 degrees.

Sunday: Partly sunny with a high of 75 degrees expected and low of 56.