Shaun Runyon, 39, allegedly attacked a group of colleagues one day after an argument with his supervisor 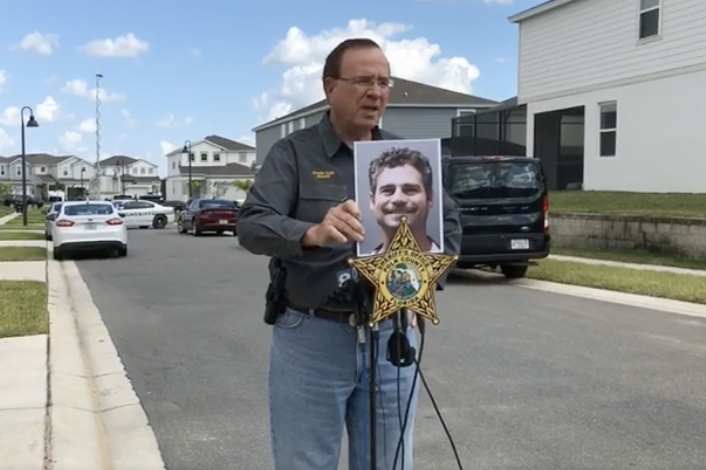 Polk County Sheriff Grady Judd discusses a triple homicide that occurred in Davenport, Florida on Saturday, Oct. 2, 2021. Shaun Runyon, an electrician from Pennsylvania, has been charged in the deadly attack on his colleagues, with whom he had traveled to Florida for work.

Three people who were brutally beaten to death in central Florida on Saturday allegedly were targeted by a co-worker who had been traveling with them on a work assignment from Pennsylvania, authorities in Polk County said.

Shaun Runyon, 39, was charged with three counts of first-degree murder and one count of aggravated battery in the aftermath of the alleged rampage, which investigators say unfolded in the unincorporated town of Davenport, near Haines City.

Runyon, an employee of J & B Electric, located in Minersville, Pennsylvania, was in Florida with co-workers and their families who were staying at homes rented by the company. The group was completing work for Publix Corporation, the supermarket chain.

Minersville is located about 100 miles northwest of Philadelphia, in Schuylkill County.

Polk County Sheriff Grady Judd said Saturday that Runyon allegedly had gotten into an argument with his supervisor early last Friday, throwing punches at the man before fleeing the job site. He was not seen again until Saturday morning, when he allegedly entered a Davenport residence where seven people were staying in one of the company-rented homes.

Runyon, who was armed with a baseball bat and a knife, allegedly ambushed one of the victims and beat him to death while he slept, Judd said. Another victim was fatally attacked on the porch of the property and a third was chased into the street, where he was severely beaten but survived his injuries. A fourth victim suffered critical injuries and was later pronounced dead at a local hospital.

Three people staying at the home — a man, his wife and their seven-year-old daughter — managed to escape the attack unharmed, investigators said.

The identities of the victims had not been revealed as of Monday morning. Judd said the supervisor was involved in the incident, but did not say whether he was one of the victims.

After the attacks Saturday, police said they followed a trail of blood as they searched for Runyon, but reached a dead end. They later learned that Runyon allegedly had shown up at a home in Lake Wales, about 20 miles south, and told the people living there that he had been raped, Judd said. He went to the hospital, where authorities learned of his whereabouts and took him into custody.

"He knew all of these victims," Judd said. "We have no idea what outraged him so bad that more than 24 hours later, he would come back and make an attempt to kill every one of them."

Police said Runyon confessed to the attacks after he was taken into custody.

Court records in Pennsylvania show that Runyon separately had been charged in a May 21 incident in Northampton County. The charges in that incident include strangulation, simple assault, endangering the welfare of children, making terroristic threats and related offenses. He has been scheduled for a formal arraignment and pretrial conference on Oct. 14.