Flyers 3 Stars of the Week: Can Joel Farabee be an elite NHL scorer? 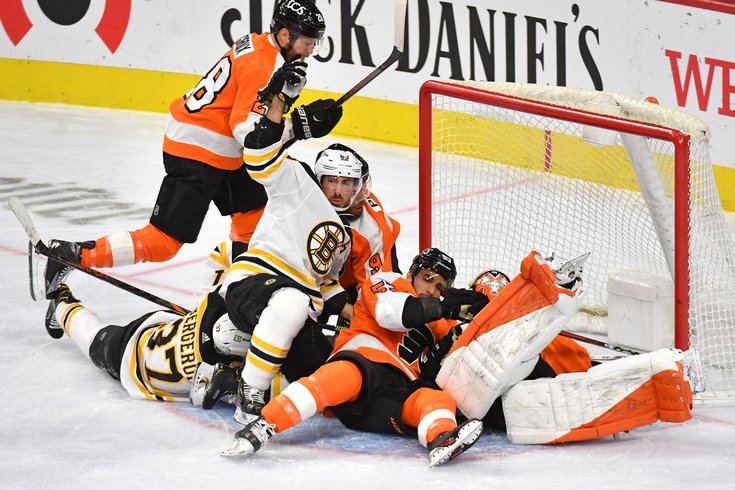 The Flyers had a deceptively bad week, despite going 2-1-1.

The Flyers played four games last week, and technically, on paper, a 2-1-1 record isn't something to complain about.

• They blew two 2-0 leads against the Islanders. They did wind up winning both games in overtime, but the blown leads are and will continue to be a problem and started an undesirable trend.

• They blew another big lead, this one to the Bruins, back on Wednesday, and this time, they lost in overtime.

• For a fourth straight game, the Flyers Friday night held a lead in the third period and would up surrendering it. Boston struck twice in 27 seconds to beat the Flyers 2-1.

• Carter Hart missed Friday's game due to back stiffness. It's most assuredly not a serious injury, but it's still a setback for a team already dealing with injury issues to many key players, most notably Sean Couturier who hasn't played since early in the second game of the season. (It's worth noting that aside from one brain fart, backup Brian Elliott played very well filling in.)

• The team revealed they expect stud prospect Morgan Frost to probably miss the rest of the season.

• Philadelphia fell out of first place with Friday's loss to Boston, and currently have 16 points (still the third most of any NHL team)

So yeah, things could have gone better.

In the week to come, the Flyers will have two-game sets against the Capitals in Washington and then the Devils at home, with another four games scheduled in seven days. Before we turn the page to a new week, lets take a quick look back at the best performers from the week that was in the newest weekly installment of our 'Three Stars of the Week':

Back on Sunday, Farabee became the third Flyer in history to score a hat trick before turning 21. His trio of goals in the team's win against the Islanders was obviously the difference in that game and he was feeling it. He also added a much-needed goal in the Flyers' third of four collapses this week, netting a goal to put them up 3-1 against the Bruins (in a game they'd eventually lose 4-3).

"I thought it would be earlier, honestly," veteran Kevin Hayes joked of the hat trick. "It took him too long. I’m happy for him. He works his bag off in practice and he is well deserved. Good job, buddy."

The question now is if the 20-year-old can keep it up. He has nine points in 12 games this season, after scoring 21 in 52 games last year. He scored eight goals in his rookie campaign and has six already in 2021.

"Joel is a young man that really wants to learn and grow his game," head coach Alain Vigneault said last week of Farabee. "He works extremely hard. He had a good summer. Had a very good first game. Then he worked hard in the other ones."

Hayes found nylon in three straight games this week, including netting the game-winner in the Flyers' second OT win over New York.

KEVIN HAYES IN OVERTIME! Hayes slams one home to win it for Philly in OT!#AnytimeAnywhere pic.twitter.com/3JcsY73ifJ

Hayes is tied for the Flyers' lead with six goals so far this season, and has the second most on the team when even-handed (behind Farabee). All three of his impressive strikes this past week came in games that the Flyers failed to get two points in regulation.

"Obviously we got seven wins this year," he said Friday. "The way we played 5-on-5 hasn’t been great. I think the last two games have been our best 5-on-5 games and we didn’t win. It’s take positives from the games. I’m sure our coaches will show us stuff we did correctly and did poorly. We’ll learn from there. Hopefully we can put together a full 60 together soon and get the two points."

JVR is in the midst of a strong 6-game point streak, and has eight points total in the Flyers' four games from this past week.

Van Riemsdyk leads the NHL with five power play goals this year and is fourth in total points scored with 16. He's feasted at the net, cleaning up rebounds and creating opportunities with goalie screens for teammates. And while the Flyers hope he continues to play at an elite level on offense, the New Jersey native is simply hoping that he and his teammates can figure out a way to finish games and not limp to the final horn.

"We just got to do a better job closing games out," he told reporters late Friday. "Again, obviously having a lead in the third, we got to make those automatic. Certainly that’s a good team and some of their key players made some big plays over the course of these games to get them back in the mix of the game. We got to find a way to close the games out."