Flyers have most points in the NHL, but haven't played like it 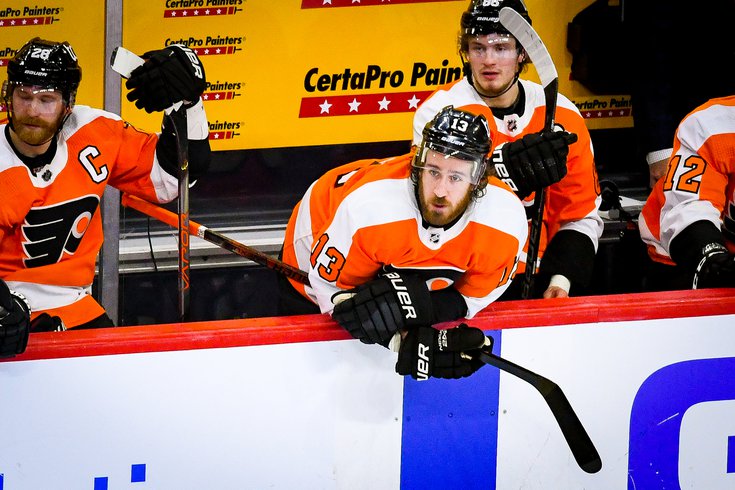 Flyers forward Kevin Hayes hangs over the boards during a game against the Pittsburgh Penguins.

If you hadn't watched a single Flyers game and looked at the standings right now, you'd see a team tied for first place and a team with the most points in the entire NHL though 10 games — and you'd be pretty impressed.

But for anyone who follows the team a little more closely, the fact that the Flyers have found ways to win this season is remarkable. Maybe once or twice, the Flyers have played to their potential this season. Every other time, they've kind of gotten lucky, playing less than their best and not paying for key mistakes.

The last two games are good examples. In each contest, played against the same Islanders who knocked them out of the postseason this past summer, the Flyers had two-goal leads. In each one, they needed overtime to clinch two points in the standings. In both wins, the Flyers were out-shot by a large margin, and in both games they committed more penalties.

Still, a win is a win — especially against the Isles.

"It just shows our team chemistry, our connection with the coaches," said Kevin Hayes, who netted the game-winner Sunday. "They don’t panic. I feel like every time we play these guys in the playoffs and now, we’re up two and then all of the sudden we are tied. It is a resilient group. We have the right leadership in this room. Even though Coots is gone — he’s a tough guy to replace — we are still winning games. Obviously, you want to win every game 10-0, but that’s not the case here. When you go up two goals and you’re feeling good about your game and all the sudden the game is tied, it’s very easy to point fingers and start panicking and this team doesn’t do that"

The thing is, being out-played and winning by the skin of your teeth isn't really a sustainable way to win hockey games. It's remarkable this team is in first place.

Carter Hart hasn't been that good

He also hasn't be terrible, but the numbers are not impressive thus far:

Hart has had two very bad starts and four very good starts, with one middle-of-the-road start to make up his seven appearances. Those who follow the action will no doubt notice he's getting very little help.

Brian Elliott, it's worth noting, has allowed 2.22 goals (17th) and has a .932 save percentage (9th) in three starts. The Flyers will need to decide whether it's more beneficial to ride the hot hand — their 35-year-old backup — or give Hart more chances to find his groove in upcoming games.

They allow 33.7 shots on goal per game

If that number seems high to you, you're right. It's the second most shots allowed per game this season by any team in the league. That wouldn't necessarily be an issue if they were shooting a lot of their own, but they're not. The Flyers have the second fewest shots on net per game — averaging 23.6 per game. And yes, simple math confirms they are out-shot by more than 10 times per game.

Do injuries explain this? Does a lack of a real training camp? Is it just due to a small sample size of 10 games? It's hard to really pinpoint the main issue here, but it is a terrible issue to have nonetheless.

The stat sheets reflect this shooting deficiency. The team's leader in shots on goal, total, for the entire season is Kevin Hayes who has 23. That number is tied for 66th best in the league. Travis Konecny has 14, Claude Giroux has just 13, Nolan Patrick has just nine.

Their special teams are average, at best

The Flyers power play scores at a 25.8% clip — 13th best in the NHL. They've also generated a mere 3.1 power play chances per game, which isn't spectacular. That should improve as the team, you know, shoots more pucks at the net. But the real concern is their penalty kill.

Ranked 22nd of 31 teams, the Flyers are successful 75.5% of the time they are short-handed. This was boosted by some clutch penalty killing in Sunday's win, something head coach Alain Vigneault hopes they'll build off of.

"For the most part, against a team that has tremendous amount of skill and can make plays and has some great shooters from the point, we did a great job," the coach said. "Our guys blocked some shots at the right time. There is no doubt that penalty killing is part of having success. I would also say staying out of the box is something we’re going to work on. We took way too many penalties tonight and we need to get better at that."

It's not all bad though

The Flyers are staying afloat — or even more than that, they're in first — without arguably their best player, Sean Couturier, who will hopefully be back soon from an injury earlier this season. They've had other injury issues too, with Phil Meyers, Morgan Frost and Shane Gostisbehere all missing time. They have survived line shakeups and a disciplinary benching (Konecny two games ago). They have won four in a row and have scored the fourth most goals in the league. And there have already been some breakout performances.

Joel Farabee, just 20, had a hat trick against the Islanders. Konecny had one earlier this season. James Van Riemsdyk is fifth in scoring in the entire NHL with 13 points. Ivan Provorov continues to play like an elite defenseman (5th in time on ice, 6th in blocked shots, 12th among D-men in scoring).

One can only make the leap to guess that if and when the Flyers start to play hockey at a slightly better and more consistent level, they appear to have the ability to leave the rest of the NHL in their dust.