How will the team replace the 2020 Selke Trophy winner in the lineup? 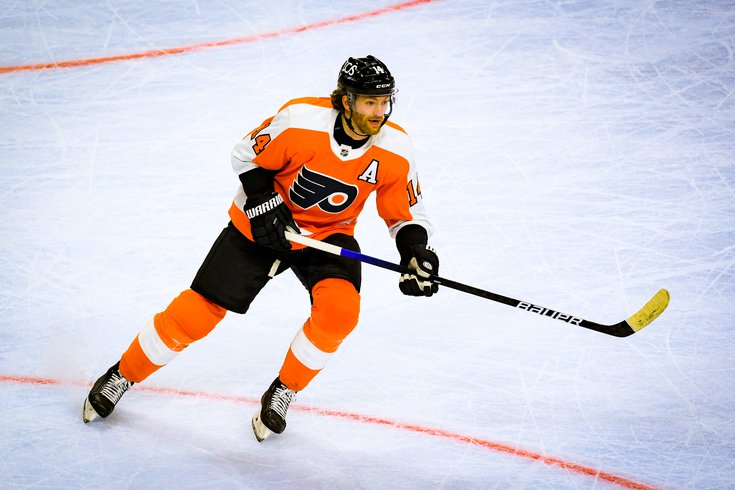 The Flyers got off to a 2-0-0 start thanks to their 5-2 win over the Penguins on Friday night. But if they hope to keep that undefeated streak going, they'll have to do so without their first-line center and reigning Selke Trophy winner Sean Couturier.

The 28-year-old forward left their win over the Penguins early in the first quarter after just his second shift of the night and did not return to the bench. Instead, he remained in the dressing room and following the game, head coach Alain Vigneault said Couturier would go for an MRI on Saturday. Well, the results are in, and according to the team, they'll be without Couturier for at least the next two weeks after he suffered costochondral separation, the medical term for when a rib separates from the cartilage that connects it to the sternum (ouch).

Injury update: Forward Sean Couturier will be out a minimum of two weeks with a Costochondral separation.

MORE: Konecny's hat trick leads Flyers to 5-2 win over Pens | NHL will bring back old school hockey this season, can Flyers survive it?

It didn't look like an especially hard collision that sent Couturier to the locker room initially, so it's worth wondering if the injury actually happened earlier in the game, perhaps on his first shift, and he tried to play through it for a time before realizing it was a more serious injury.

Either way, the team will be without their top center for at least two weeks, which would cost him seven games. That's not a ton, but in a shortened 56-game season it's actually quite a bit (12.5% of the season) — on top of the game he missed on Friday after playing just two shifts. Now, they need to figure out how to bridge the gap until he returns. They could bump all their centers up a line and call up someone from the taxi squad. They could also try moving Claude Giroux back to center, but that would mean additional moves would also need to be made, as Crossing Broad's Russ Joy outlined. Or, the team could put 21-year-old prospect Morgan Frost into the lineup and then adjust the top 3 lines.

The short-term fix that makes the most sense is sliding Giroux to center for a few games, elevating Michael Raffl off the fourth line, sending Scott Laughton to wing, and bringing a guy like Connor Bunnaman in to play 4C from the taxi squad. There is a scenario where Giroux moves to center the top line and Morgan Frost is given a chance at left wing on a line with Kevin Hayes and Joel Farabee. Given AV’s track record, if Frost is in the lineup, it’s possible we’d see one of Voracek or van Riemsdyk move up to the second line and Frost or Farabee sent to the third line.  [crossingbroad.com]

It's that last idea that's starting to gain a bit of traction, as other outlets have also suggested that the move should be to give Frost some time. Here's more from Kurt at Broad Street Hockey...

It’s gotta be this, right? The Flyers are obviously not 100% in on Frost, given that he’s not in the all-healthy lineup. And I suppose there’s something to the idea that if you’re not convinced that a prospect is totally ready, you don’t put him in just because there’s an opening. But clearly they think he’s close enough, since he’s on the active roster, and while obviously there is no chance of replacing Sean Couturier with a 21-year old center who has 20 NHL games to his name, this is the option that has the highest ceiling. Part of why the Flyers haven’t given Frost that chance is almost certainly because the team doesn’t have a top-9 center spot available. It’s there now, and this seems like the slam-dunk option.  [broadstreethockey.com]

[UPDATE: Frost was reportedly on the first line at Flyers practice on Sunday, centering Travis Konecny and Oskar Lindblom. After practice, Vigneault explained his the decision, saying that Frost "deserves" to play with those two and that he didn't want to shuffle all his lines as he believes they're just beginning to build chemistry and that could be a setback.]

No matter how they decide to patch things over, Couturier's are big skates to fill. Last season, on his way to becoming just the third Flyers player to win the Selke Trophy, Couturier finished second on the team in points (59), first in plus-minus (+21) and led all forwards in average ice time (19:50). And he did all that while being the best defensive forward in the game and anchoring both the team's power play and penalty on the first unit of each.

The Flyers were able to pick up a win on Friday after he went down — and this team is very deep — so hopefully they can continue to win games without Couturier in the lineup. Their first test will come Monday night when they host the Sabres.