Carter Hart also had a big game, but Sean Couturier left the game with an injury 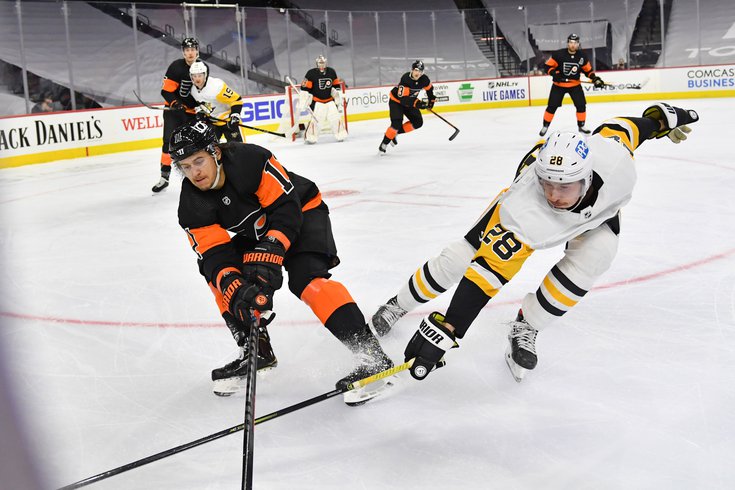 The Flyers got out to a 3-0 lead over the Penguins on Friday night, and although things got dicey at points, Philly was able to hang on for a 5-2 win and improve to 2-0-0 on the young season

• The Flyers defense through the first 20 minutes certainly doesn't qualify here, but their offense — specifically their ability to finish — does. The team netted three first-period goals on just nine shots and chased Penguins goalie Tristan Jarry with their third of the frame. And those three goals were the only reason the Flyers, who allowed a pair of goals and 14 shots themselves, were on top after the first 20 minutes.

The first goal for the Orange and Black came on their first shot of the game on the back end of an extended power play, when Travis Konecny found the back of the net after a great setup from Jake Voracek, who was playing on the first power play unit with Sean Couturier injured (more on that in a bit).

That came after a slow start for the Flyers that saw the Penguins buzzing all around them, but back-to-back Pittsburgh penalties allowed Philly to change the momentum in their favor.

Two minutes later, Konecny would add his second of the period coming off a huge save from Carter Hart.

The Flyers would make it 3-0 just two minutes later, giving them three goals in 6:03, as Voracek this time found Ivan Provorov, leading to a goalie change for the Pens.

• Konecny was not done after those two first-period goals. He would add a big third goal late in the third period for his first career hat trick.

More importantly, the goal was a much-needed one for the Flyers, who were hanging on for dear life up 3-2 over Pittsburgh. With just under seven minutes left when Konecny found the back of the net for the third time, the two-goal lead all but sealed the deal for Philly.

• Prior to the start of the season, we wrote about how the format of the 2021 season was going to make for a more physical game this season, with all the back-to-backs and the fact that the teams would only be playing within their own divisions, facing each team seven times.

And, perhaps unsurprisingly given the teams involved, it didn't even take until the end of the Flyers' first back-to-back series of the season for things to get chippy. Unfortunately for the Flyers, the Penguins seemed like the more aggressive team, and for portions of the first period seemed to be tossing the Flyers around a bit. Still, we'll keep this in the good section because it seems like this format is going to lead to some fun hockey this season.

And this might not have even been his best save of the night. He finished with 31 saves overall on 33 shots and at times, especially in the second and third periods with the Flyers leading by just a goal, he really kept the team in the game. Many of those saves came after the Penguins cut it to a 3-2 game and kept the Flyers ahead on the scoreboard.

• Nolan Patrick may not have found the back of the net, but he had another nice showing in the Flyers' win over the Penguins, picking up the primary assist on Travis Konecny's second goal. It's nice to see that he's playing well out of the gate after missing all of last season with scary migraine issues. The former second-overall pick has been playing like one so far this season, and between him and Oskar Lindblom (who added an empty-netter with just over two minutes left), it's like the Flyers offense made two big offseason addition without actually have to go out and sign or trade for any players.

• On the flip side of the Flyers good offensive showing in the first period were their struggles on the opposite side of the puck, as they allowed Pittsburgh to all but erase a 3-0 lead late in the stanza. And much like the Flyers' onslaught earlier in the period, the Penguins' back-to-back goals were sparked by a trip to the power play. It was — who else? — Sidney Crosby to put the Penguins on the board first.

Crosby gets the Penguins on the board pic.twitter.com/PZy3ZKtPUW

Just 30 seconds later, Brandon Tanev pulled Pittsburgh to within one thanks to this goal.

The Penguins get back within one. pic.twitter.com/LEocvWKPho

The Flyers were able to kill off one more Penguins power play to end the first period, but the damage at that point appeared to have been done. All the momentum the Flyers had generated — despite not playing their best — had evaporated by the time they retreated to the locker room. Luckily for the Flyers, any momentum the Pens created also stayed in the locker room.

• What didn't stay in the locker room at the first intermission was the sloppy play that dominated the first period. It was back — on both sides — for the second as the two teams spent the period racing back and forth down the ice but had just a total of 13 shots to show for it (just four for Philly). The Flyers, through the first 10 minutes of the second period, had just two shots, and that included a two-minute man advantage right toward the end of that stretch.

The Flyers might've scored a trio of goals in the first period, but they didn't put up a ton of shots. The second period was even worse, as they took just four shots total in the period and, unsurprisingly, failed to find the back of the net. Perhaps Scott Hartnell said it best on NBC Sports Philadelphia during the intermission when he referred to their play as "shitty hockey."

I think they both fit.

Of course, it's hard to score when you're not putting up shots — although the Flyers found a way to buck that trend in this one. And, thanks to that aforementioned stellar play from Hart, the Flyers were able to hang on to their one-goal lead despite the Penguins clearly getting the better of the attack heading into the final period. Still, at the time, this was a game it felt like they were losing despite what the scoreboard said.

This is absolutely one of those "feels like they're losing even though they're ahead" games for the Flyers. That's what losing your best player, giving up most of an early three-goal lead, and then having two shots on goal in the first 10 minutes of the 2nd period will do.

• After a physical start to the game, the refs began to call things a little tighter, leading to several power play opportunities for both sides. The Flyers, after scoring on their first man-advantage, struggled for much of the rest of the night, and it was so bad at points in the second period that Pittsburgh spent nearly half of a Flyers power play in the offensive zone.

Philly finished the game just one for six on the power play, something they'll definitely look to improve on moving forward. Of course, a large part of their struggles on special teams could be due to the lone item in the ugly section (although a lot of this game was honestly pretty ugly, just ask Scott Hartnell).

• Sean Couturier played just a few moments on Friday night before disappearing into the locker room not to be seen from again. That's ... uh ... not great.

No word yet on what type of injury the reigning Selke trophy winner sustained, as he didn't appear to take any big hits. The closest thing looks like the above hit he took at the end of his final shift on Friday night, were he takes a bit of a shot to the shoulder. Stay tuned, as this could be a big deal for the Flyers should he be forced to miss extended time.

UPDATE: Couturier will get an MRI on Saturday on his shoulder.

Couturier getting MRI tomorrow on his shoulder, per AV.