The Flyers have a shooting problem 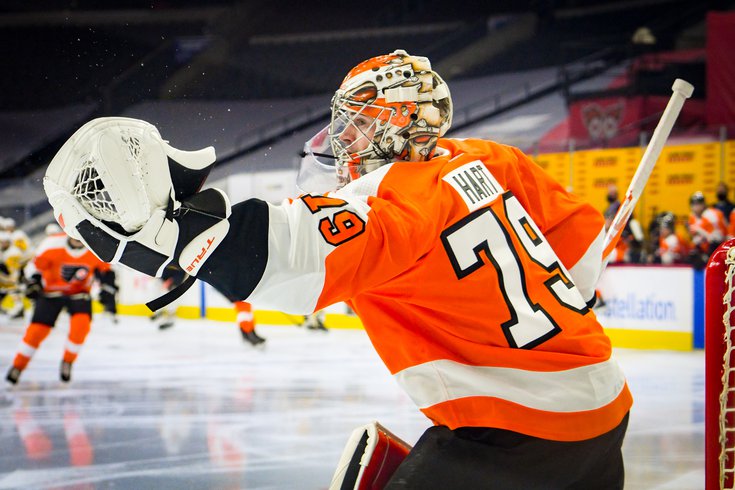 Last season, in 69 games, the Flyers allowed the fewest shots on goal in the entire NHL. They would eventually play their way into the No. 1 seed in the East and were one game from the Eastern Conference Finals.

In 2021, through their first five games (3-1-1), they have allowed the second most shots on goal in the league.

With mostly the same roster, (save for a few injury woes and Erik Gustafsson), the Flyers have been out-shot in every single game this season, and have a total shots on goal deficit of 187-125.

That's probably not a good stat for Philly, even with it being a small sample size.

From first to worst in shots allowed. Interesting.

The Flyers have lost valuable shifts from injured Sean Couturier, who was voted the best defensive forward in the NHL last season. That certainly makes an impact. They've also been dealing with a short-handed in-game roster in almost every game this year, and players have had to pick up extra shifts and play with different lines on the regular.

The excuses are probably not something the Flyers want to hear.

“We’ve just got to find another gear, and that goes for everyone,” Hart told reporters Thursday night following a 5-4 overtime loss.

Hart has a .902 save percentage so far this season, worse than his prior career marks of .914 last year and .917 the season before. Potentially because he is being hung out to dry on defense. The Flyers have needed a 40-shot shutout from Brian Elliott Tuesday and a 39-save effort from Hart to force overtime Thursday in the team's last two games. That's probably not how you want to use your goalie.

Head coach Alain Vigneault was asked about all the shots on goal his net miners have been forced to stop after their only regulation loss this season, 6-1 to the Sabres.

"Well, it is a very small sample size so far," the coach said, "I do believe that we all understand that we need to get our game to where it can be. This group has worked extremely hard in the past. I don’t see why they wouldn’t work extremely hard moving forward here to find our rhythm, to find our game and to play the right way.

The sample size doesn't appear to be changing the more games the Flyers play.

"We need to do a much better job supporting each other over the ice," James Van Riemsdyk said earlier this week, "on the forecheck, everyone just doing their jobs-swarming the other team in their end and then when we get the puck back, being in good places to release pressure and get some sustained zone time."

Shots on goal, obviously and thankfully, don't count on the scoreboard. But imagine a baseball team getting two-thirds of the hits of their opponents — it makes it hard to win games.

The Flyers have done just that so far, and have the fifth-best scoring offense in the league so far. Of their relatively futile 25.3 shots per game, they've been able to find the back of the net on 15.2% of their SOG's, the second best mark in the league. For contrast, the Lightning led all 31 teams in 2019-20 with an 11.2% scoring clip. The Flyers will not keep it up.

And if they continue to post big shot deficits game in and game out, their current style of play is not going to lend to winning ways.

"We know we can still play better," Claude Giroux said this week.

We know it too. And the silver lining is, if a team being out-shot by a ridiculous 12 shots per game can find a way to be 3-1-1, they should have no problem winning when they reverse the trend.