Flyers may have won, but they lost two key players to injury vs. Buffalo 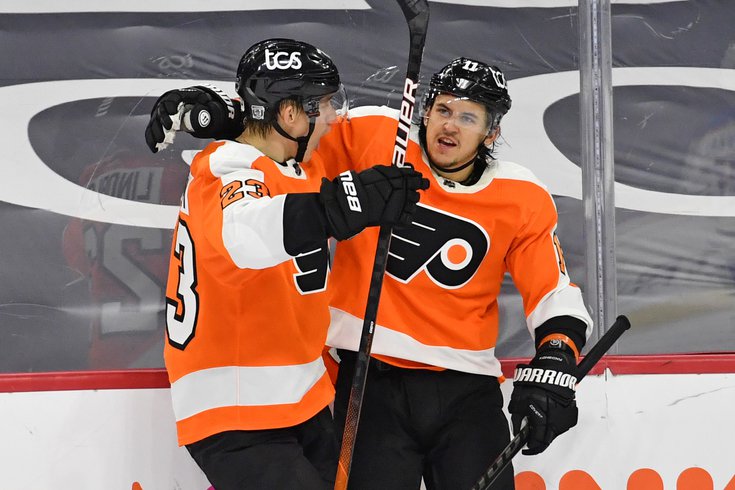 Is Travis Konecny one of the best forwards in the league?

Brian Elliott was ageless and Travis Konecny was a shining beacon of youth as the Flyers cruised past the Sabres 3-0 on Tuesday to split their two-game series with Buffalo.

Hitting the ice on the second day of a back-to-back, Philadelphia had energy and got a shutout effort from their backup goalie, ending their season-opening homestand with a respectable 3-1 record and six points.

While it was far from a perfect effort that may have included some concerning injuries to key players, there are a lot more positives than negatives to take to Boston as the Flyers hit the road this coming weekend. As always, here's the good, the bad and the ugly from another win.

• Goalies in the NHL are fast learning that Travis Konecny on a breakaway is their worst nightmare. With the Flyers and Sabres locked in a scoreless defensive struggle in the second, offense finally came seemingly out of left field as Oskar Lindblom led Konecny perfectly off the boards to set up a one-on-one between him and Buffalo's net minder. Rather than get cute, Konecny let the ice do the job for him, sliding the puck gently between the goalie's legs.

1-0. What a beautiful sight. TK has six points through four games and is among the NHL's leaders.

• A one-goal lead in the third period was a bit too close for comfort, and the Flyers were able to nab some insurance with a two-on-one. Kevin Hayes wisely deferred to his fellow breaking-away skater Jakub Voracek who slid the puck passed Linus Ullmark to get the Flyers up 2-0 with six minutes left in the third.

• More insurance came in the form of a long range empty-netter from Kevin Hayes.

• Committing two penalties in the same two-minute span early in a hockey game is obviously not an ideal start — but it also can present an opportunity. After a first period Rogert Hagg interference call and Michael Raffl high stick, the Flyers killed off a minute of PK down 5-3, and the second minute down one man to create some much-needed early momentum. Their focus on staying in the driver's seat was clear during the kill and carried over into five-on-five, as Philly controlled the action, keeping the Sabres in their defensive end for much of the first — but the Flyers didn't turn any of their 11 shots on net into goals.

• After the Flyers were decimated Monday 6-1 and Carter Hart was pulled after allowing four goals, I was curious as to whether Alain Vigneault would throw him right back into the pool or give him time to stew on his awful performance (which, I will point out for Hart's biggest fans, wasn't entirely his fault but was still quite ugly). The answer came when Brian Elliott was in net to start Tuesday's contest.

It was Elliott's first start of the season and having a good back up goaltender is like having a good backup quarterback — it's really important, especially for a team expecting to contend. To say Elliott was really good is an understatement, as he built off some solid saves he made in relief on Monday to stop all 40 of the Sabres' shots Tuesday, including this one:

If things go well for the Flyers, though, there won't be a ton of Elliott to watch going forward — though he'll try to have something to say about that.

In the small sample size of 2021 so far, Hart has been less than impressive. He's allowed nine goals on 89 shots (.899 save percentage) and a 3.66 goals against average. Last season the Flyers scored 3.3 per game, so you can do the math. Having time to step back and, as is the assumption hop back between the pipes on Thursday in Boston might be the right diagnosis to get him back on track.

• The Flyers lost to the Sabres 21 and a half hours before the puck dropped on Tuesday evening, a byproduct of the new schedule in the NHL this year that has teams playing only the teams in their geographically organized divisions. There are two-game series everywhere and occasionally they're back-to-backs. The short turnaround energized the Flyers and you could see the energy through the game, as at one point they had out-hit the Sabres 15-6.

"I'm confident that we're going to respond the right way.

"The beauty of last night's game is that we can get right back at it tonight and play well. And that's what I'm very confident we're going to do as a group."

There was clearly more passion in Game 2, and reminiscent of what a losing playoff team might have in the second contest in a series. The pandemic has been awful for pro sports, but perhaps this will be something the NHL will carry over when fans and widespread travel returns.

• The second was definitely a net positive for the Flyers. They generated some real impressive scoring chances that were thwarted by Buffalo's Carter Hutton, who has been damn impressive in these two games (in addition to Konecny's gentle touch on the breakaway). They really controlled play for most of the frame before a successful penalty kill gave way to a frightful barrage of chances for the Sabres, who missed an open net a few times and took advantage of Philly's issues overcoming a forecheck.

Some bailout saves from Elliott helped as well, but it was a seeming lack of focus that nearly cost the Flyers. Having lapses like that is a way to lose hockey games in a hurry, particularly with an offense that is in neutral, as Philly's was through two frames Tuesday.

• It didn't wind up costing them too much in this one, but the power play has been ineffective and the Flyers went 0-fer on the man advantage for the second straight game. Vigneault has already had to shuffle things around due to injuries (more on that in a bit), and it seems that some combination of lack of execution and chemistry is costing them in that area.

• Shots on goal can be a misleading stat. If shots on goal are what mattered, then why even have a goalie? Still, despite the Flyers creating what seems like a normal amount of chances, they have been out-shot in every game this season, 144-99. That's actually a really big margin, and if nothing else they're making it easier on opposing goalies. We can't stress enough how much of a blip in the stat book four games are, even in a shortened 56-game season, but it would be encouraging to at least see them shoot more times than their opponents once or twice.

• Already down arguably their best forward — Sean Couturier, who will miss at least two weeks — the Flyers were shuffling five defenseman after Phil Myers left with an injury in the second. For those wondering, Nate Prosser is the defenseman on the practice squad with Shayne Gostisbehere getting a non-roster designation and a few others with the Phantoms.

Frost shaken up by this hit. pic.twitter.com/ug6iPlT8xC

The depth of the Flyers has been something many have singled out as a strength, but no one wanted to have to test that so soon into the season.