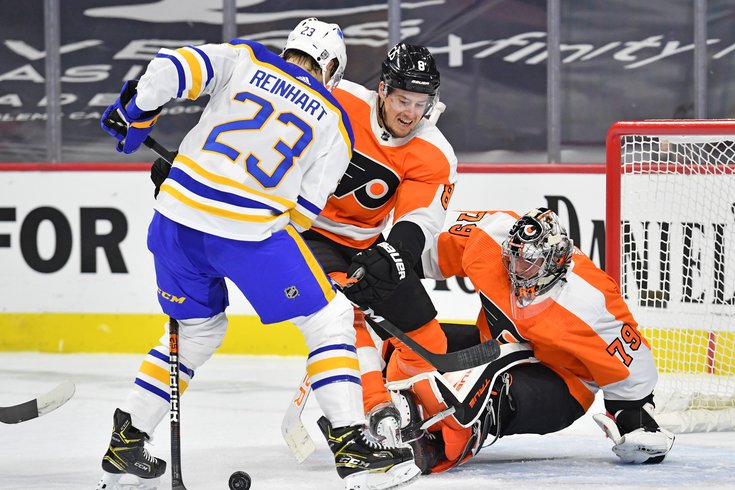 Carter Hart didn't have his best day against the Sabres Monday night.

It's time to panic people. The Flyers have lost a hockey game.

Of course, we're kidding. And if you were one of those high-riding fans who thought they'd never lose again after their quick start against Pittsburgh — come on, really?

Yes, it was a particularly ugly one, as the Flyers got ripped 6-1 by a Buffao Sabres team most expect to finish dead last in the East Division. But there are 53 more of these still to play (including another one vs. Buffalo in less than 24 hours), and to appreciate the sun, you have to know what rain is... or something.

It's not a complete loss if you learn from it. And the Flyers have a lot they can learn from Monday's loss. Here's the good, the bad and the ugly:

Spoiler: there wasn't much.

• After a brutal first 40 minutes, Alain Vigneault shuffled up his lines — the ones that had remained pretty much intact for the first eight periods of the season, and it actually did give the Flyers a little spark, as they kept Buffalo net minder Carter Hutton honest, making much more noise in the offensive zone than they had all game.

With less than three minutes left, the Flyers avoided a dreaded shutout, after a picture-perfect Michael Raffl pass set up Nicolas Aube-Kubel with a wide open net.

Somehow, NAK earned a double-minor for high sticking too, and the Flyers ended the game on the PK.

• The Flyers have the third youngest roster in the NHL this season (26.3 average age). That, of course, is in part thanks to Morgan Frost, who at 21 started on the third line Monday alongside Oskar Lindblom (24) and Travis Konecny (23).

Why are we mentioning this rather dull piece of evergreen information? Well, after their fast start, and in the wake of last season's over-performance, many have forgotten just how young this team actually is, and how ahead of schedule it is. Nights like Monday are inevitable, but it's certainly better than being old and washed up — just ask the Eagles.

Two of the last three Stanley Cup champions, Tampa (4th oldest) and Washington (oldest) are already at the older end of the spectrum, and even Pittsburgh is kind of old (11th oldest). This team will compete for a long time. Be patient.

• In just their second scoreless period of the season, the Flyers were out-worked pretty thoroughly in the first, with this clink off iron by Curtis Lazar that was quite the deft move to beat Hart putting Buffalo ahead, 1-0.

The Flyers entered the locker room with their first deficit of the season, which, you know, is probably a thing that was going to happen eventually. But it's one thing to be losing by a goal. It's another to barely even be in the building. The Flyers were sluggish and certainly did not look like they were coming off back-to-back wins and a weekend off. Philly mustered just four shots on goal in 20 minutes (the Sabres had 11).

Not much changed in the second, as the Sabres found the net on three of their first four shot attempts in the middle stanza. Oof. The Flyers created a lot of chances but they were no match for the opportunism of Buffalo's wingers.

• While on the subject of getting out-shot (which Philadelphia did, 36-22), it's worth mentioning that the Flyers had just 47 shots on net in their first two wins, good enough for the seventh fewest per game of any team in this young season. In their 6-1 loss Monday, they once again failed to get the puck on net nearly enough.

The Flyers' weren't great with that last season either and it's curious as to why. With so many defensemen who can shoot and forwards who can create chances for each other, this number needs to go way up on a nightly basis if they want to really contend in 2021.

• Would there have been a difference with Sean Couturier on the ice? Losing by this many makes that a pretty doubtful contemplation. But if they continue to struggle at things Coots excels at, there could be problems down the road.

"When your number one center goes down — he won a Selke last year, he’s been one of the best [centers] in the league — it’s always tough to overcome," Jakub Voracek said back on Friday. "He kind of brings that poise to the game and to his line and is real smart with the puck and he holds the puck really well. That is one of the reasons why the game was so sloppy because we were missing Coots. So hopefully it won’t be long term."

• I noticed this in the Pittsburgh games, but the Flyers won so I didn't really pay much mind to it. The Flyers are really susceptible to the forecheck for some reason. Perhaps it's just because the season is early, but they are absolutely getting killed in the defensive zone and their opponents — on Monday it was Buffalo — are able to work them for extra opportunities.

It's simpler said than done, but the Flyers really need to do a better job of controlling the puck and making deliberate decisions when they're trying to help Hart defensively.

• In the second period, Hart was hit with a two-minute penalty for tripping. It was the first two PIM of Hart's career, and the first for a Flyers goalie since 2018-19. This seems like a perfect opportunity to remind our readers of the legacy of Flyers goalies getting penalties.

Anyway, the penalty led to a Sam Reinhart goal after a really nice pass across the crease by Taylor Hall. Unfortunately for Philly, Hart was beat a second time by Reinhart only a few minutes later, putting the Flyers in a pretty daunting 3-0 hole 27 minutes into the game.

• After allowing a fourth strike, Hart was pulled midway through the game, in what could be characterized as one of the worst starts of his young career. Goalies have their down days. Last season, Hart allowed four or more goals nine times in the regular season and two more in the postseason. Only once in his career, in March of 2019, has he done it twice in a row. It will be interesting to see who is in net for Game 2 of this mini-series against the Sabres on Tuesday.

If this puck had hit me, it would have been pretty ugly.

The press box sucks. I am never going back. #flyers pic.twitter.com/wA607hHPPI

In all honesty, the media — at least those writing and not taking photos or broadcasting for television — are getting a treat sitting in seats that would probably cost us hundreds of dollars to sit in if not for the pandemic. To have a hockey puck knuckleball toward you and hit your press table before falling into an empty row ahead of you is a new experience for me.

This is my eighth year covering the Flyers and live NHL games and my first puck. It's heading to my man-cave where it will reside in perpetuity.