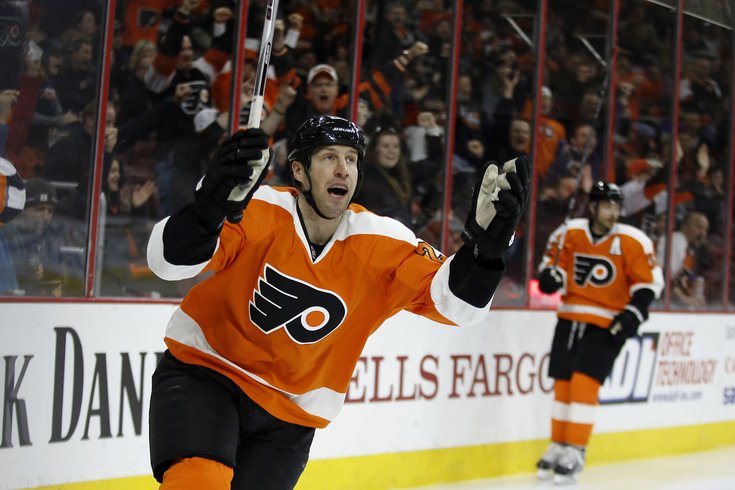 That's the face of someone who just scored his first goal in over a year...

They say it's about how you finish, and not how you start. But for the Philadelphia Flyers on Thursday night, it was all about the oft-forgotten middle.

After a slow start against the Buffalo Sabres, the Flyers scored four times in the second period -- three in a span of 7 minutes and 10 seconds -- and never looked back as they cruised to a 5-1 win at the Wells Fargo Center. Those four goals were the most in a period all season for the Flyers, topping their previous high of three (12/15 vs. Carolina).

And because I'm really excited about one of those goals, let's get right to the observations:

•    R.J. Umberger scored -- and no you didn't misread that. His goal, which was set up by a great pass from Sam Gagner, was his first in over a year. He last found the back of the net on January 27, 2015. His goal got the scoring started for the Flyers just a minute and 23 seconds into the second period.

It'll be interesting to see how long it takes for him to score again now that his goal-less streak has come to an end.

•    Shayne Gostisbehere tied the Flyers franchise record (10 games, Mikael Renberg) for consecutive games with a point by a rookie thanks to his assist on Wayne Simmonds' second-period goal. For Simmonds, it was his 20th of the season.

"My love for you will never Wayne”

Originally, the goal went down as unassisted, but that was changed during the second intermission. With the goal, Gostisbehere also tied the NHL record for consecutive games with a point by a rookie defenseman.

•    Brayden Schenn also beat Sabres goalie Robin Lehner and scored just 48 seconds after Umberger did. It was his 15th of the season.

It was good to see him bounce back after taking this scary hit in the first period.

•    The final goal of the second period belonged to Michael Raffl and put the Flyers up 4-0.

Raffl ends his scoreless drought with a beaut. pic.twitter.com/dddoS2DDW1

And then Radko Gudas celebrated in his own way, by getting in the first of two fights.

and Radko celebrates the only way he knows how. pic.twitter.com/cqpv7XlR67

•   But the Flyers weren't done just yet. After the Sabres finally beat Steve Mason on their 32nd shot of the game to cut it to 4-1, Nick Cousins put any notion of a Buffalo comeback to rest with an absolute laser.

Feels like the first time (Cous’ it is) #BUFvsPHI pic.twitter.com/FPwuj8IJof

The goal was the first of his NHL career and his second point of the night, after previously picking up an assist on the Raffl goal.

•    And we can't forget about Mason. He finished with 41 saves on 42 shots and looked really good doing it. Even when he needed some help from his friend, the post.

•    The Flyers also played extremely well on the penalty kill. They held the Sabres' sixth-ranked power play unit to 0-for-6.

•   Oh, Mark Streit also did something I've never seen before. He was in the box for interference, and took another interference penalty before even leaving the box. True story.

This Flyers player took another penalty while STILL INSIDE THE PENALTY BOX:https://t.co/5ZJJCZgctf pic.twitter.com/Yh7fm814gJ

The Flyers will have back-to-back games this weekend against a pair of Metropolitan Division rivals, games they’ll need to win if they hope to catch and ultimately pass if the teams standing between them and a playoff birth. First, they’ll host the Devils on Saturday at 1 p.m. before heading up to Madison Square Garden to take on the Rangers on Sunday night at 7:30 p.m.

Following their win over the Sabres, the Flyers (57 points) are four points behind the Devils, who are tied with the Penguins for the final wild card spot at 61 points — but the Flyers still have two games in hand over New Jersey. As for the Rangers, they’re going to be a little harder to catch, even if the Flyers still have a game in hand. With 67 points, their currently in second place in the division.