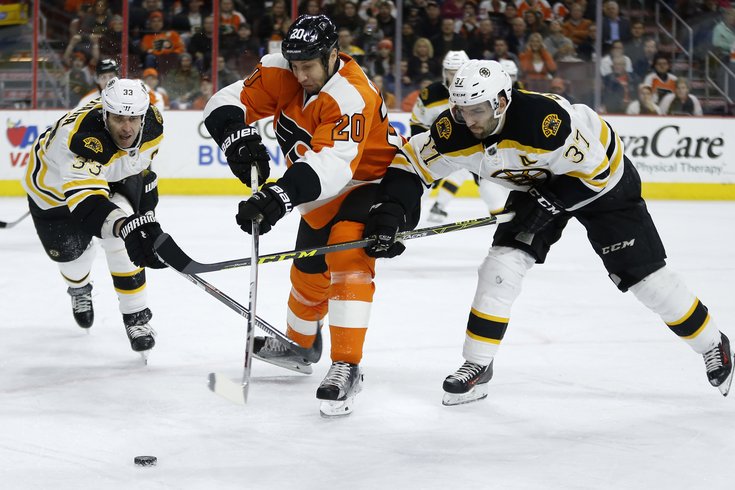 The Philadelphia Flyers came up short in not only their comeback attempt against the Bruins but also their bid for a season sweep of Boston.

After winning in come-from-behind fashion in each of their first two games against the Bruins this season, Dave Hakstol's team fell short on Monday night, falling 3-2 at The Wells Fargo Center.

The Flyers (20-18-8), who have now lost three straight and four of their last five, fell behind 2-0 in the first period. Then, for much of the next 40 minutes, it was the Bruins who seemed to be outmatched. Wayne Simmonds scored a pair of goals -- one in the second and one in the third to tie it -- and Michal Neuvirth did all he could to keep the kept the visiting team off the board. But with less than two minutes to play in the game, Brett Connelly redirected a Zdeno Chara shot past the Flyers goalie and into the back of the net for what ended up being the game-winner.

Here's a look at how things played out:

•    Boston got out to an early lead, scoring twice in the first period -- and both with the man advantage. The first came about five minutes into play and was scored by Patrice Bergeron after a Radko Gudas block put the puck right on his stick.

If you take penalties against the Bruins, you're gonna have a bad time pic.twitter.com/wNAQCzGG2u

The second, a snipe by Brad Marchand, came with about two and a half minutes left in the period. For the Bruins center, it was his fifth straight game with a goal.

•    For the Flyers, the way they started against Boston highlights two issues that continue to plague the team — slow starts and poor penalty killing.

The latter may have something to do with the absence of Sean Couturier, who missed his third-straight game with a lower body injury. The Flyers, after allowing the Bruins to score on each of their first two power play opportunities, had only successfully killed off their last six penalties. And the team has felt Couturier's overall absence as well; heading into play Monday, the Flyers were just 1-5-1 in their seven games without him this season.

Sure, some of their struggles against the Bruins Monday had to do with the fact that the Flyers were facing the NHL's second-best power play unit, but they haven't exactly been on fire as of late...

Bruins had been 1-for-15 on the power play in previous 8 games. Tonight they're 2-for-2 against Flyers' 25th ranked PK unit

But this is nothing new for the Flyers. And those slow starts have resulted in a lot of playing-from-behind situations.

Sad stat: Flyers have taken a lead into the second period in just 5 of 45 games. Think about that.

Perhaps the most ridiculous stat of the season: Flyers have multiple first-period goals for the first time in THIRTY-NINE GAMES.

They’ve scored fewer first-period goals than any other team in the NHL. They were also 28th in goals scored per game (2.24) heading into play Monday night. As you can clearly see, that's not a winning formula.

After the game, Simmonds was asked if he could explain his team's slow starts.

“No, we just have to be mentally better," Simmonds said. I don't think it’s physical. If you can come out second and third and play the way we did then I don’t think it’s physical at all, so I just think we have to make sure we’re getting ourselves up for the first periods and it starts with the first shift and it snowballs from there."

•    Playing from behind hadn't hurt the Flyers against the Bruins ... at least not until Monday night. The Flyers had come from behind in each of their first two wins over Boston, with the most-recent coming less than two weeks ago. The Flyers actually held a 1-0 lead after the first period but surrendered a pair of second-period goals before coming back to win 3-2. Their other, which came way back on Oct. 22, was a 5-4 OT win in Boston. In that game, they scored twice (!!!) in the first period -- but so did the Bruins, who took a 4-2 lead into the third period. Claude Giroux scored once in the third (along with Simmonds, who tied it up) and again in OT to lift the Flyers to victory. The third time around, however, constantly playing catch up finally, for lack of a better phrase, caught up with the Orange and Black.

“Yeah obviously it’s not what we want to have every single game," Simmonds said. "It just seems like it’s been like that the last three or four. Obviously every game is tight and we’re working hard and keeping in it, but we just have to be a little bit better.”

•    It looked like the Flyers would even the score at some point in the second period. They had a ton of chances in the second, out-shooting the Bruins 15-6 in the period. They were able to get one, thanks in large part to four power plays in the first 11 minutes of the period. Here's a look at Simmonds' first goal of the night, which was assisted by Brayden Schenn and Shayne Gostisbehere and came less than four minutes into the second.

•    Simmonds' game-tying goal would have to wait until the third period -- and was almost wiped off the board by a review. But after a second look, the refs said that Michael Del Zotto was onside and the goal counted. For Simmonds, it was his second of the night and 14th of the season.

Good goal! (Or great goal, if you ask us.) #BOSvsPHI pic.twitter.com/lxWZH7ULTr

•    But there would be no comeback this time. Connelly scored the game-winner for the Bruins on a deflection with 1:54 left to play. There was a good amount of traffic in front so I don't blame Neuvirth for this one.

"Obviously it’s not easy losing these games in the final couple minutes," Brayden Schenn said after the game. "You push so hard all night to try and get a point out of it and come up empty-handed. So we have to try and throw this one behind us, because if we dwell on this one too much were going to go into Washington and it’s not going to be a pretty game."

•    Speaking of Neuvirth, he played very well for the Flyers and was the main reason they were in this game for so long. He started in place of Steve Mason, who had a maintenance day. In all, Neuvirth stopped 28 of 31 Bruins shots and made more than a few big plays early in the third period to keep the score at 2-1. Unfortunately, that wasn't enough to earn him the win.

After the game, however, Neuvirth was seen limping and was unavailable to the media.

Michal Neuvirth was limping heavily postgame. Wasn’t available for interviews because he was still being seen by doctors.

•    Jordan Weal was active for the first time since being acquired by the Flyers earlier this month. He was on the third line with Scott Laughton and R.J. Umberger. He didn't get in the scoring book, but he did play on the Flyers' second  PP unit. Overall, not a bad debut in orange and black for the young center.

•    There was a scary moment in the second period, as it looked like Schenn may have hurt his knee after crashing into the boards on this play:

Schenn goes into the boards very awkwardly and is in a lot of pain pic.twitter.com/gN54dOYKUz

Luckily for the Flyers, it turned out to be nothing. He didn't even miss a shift.

The Flyers will head to Washington on Wednesday where they'll face the Capitals at 8 p.m. on NBCSN. They'll then have five days off -- except for Giroux, who is headed to the NHL All-Star Game -- before returning home to face the Canadiens on Tuesday, Feb. 2.