Ron Hextall wasn’t kidding when, time and again, he stressed patience as the subject of his team’s highly regarded young prospects came up. On Wednesday, the Flyers trimmed the roster from 58 to 35 players, and there are quite a few big names leaving Philly for now.

Both 2015 first-round picks, Ivan Provorov (Brandon) and Travis Konecny (Ottawa), are headed back to their respective junior teams. Ditto for 2014 first rounder Travis Sanheim (Calgary). 2013 first-round pick Samuel Morin will begin his first professional season with the Lehigh Valley Phantoms in the AHL.

Konecny was very impressive in creating a bunch of chances in his first couple of preseason games. The undersized and dynamic forward was asked after Tuesday night’s win over the Rangers if he thought he was making the decision to cut him more difficult for Hextall and co.

“I don’t know,” Konecny said. “I’m working hard and just trying to do my best to make a good impression.”

I think Konecny certainly made a good impression, but the deck was stacked against him making the team this season. Safe travels to Ottawa, bandwagon. 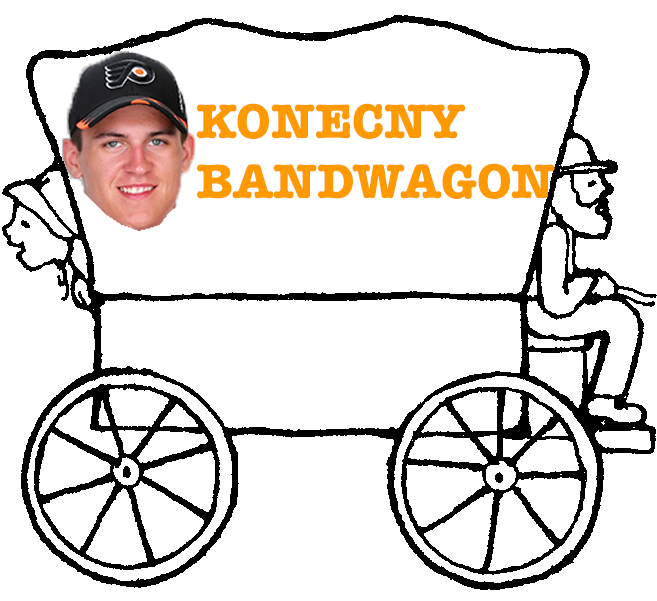 The young name still hanging around is second-year professional Shayne Gostisbehere, who says his knee feels great. The 22-year-old defenseman has only played in seven combined games at the AHL and NHL levels heading into the season. Gostisbehere, who scored twice in the Rangers game, was honest when asked if that was enough to prepare him for a full-time role in the NHL.

“I mean I don’t know,” Gostisbehere said. “Experience is everything. The more games I get the better I’ll get. I mean just playing games, making plays, getting better and learning.”