Flyers fall in SO after Simmonds ejected for punching Rangers' McDonagh 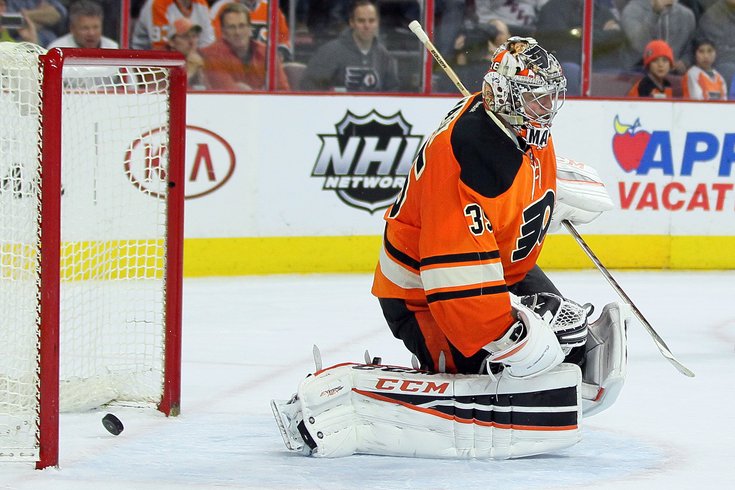 Stop me if you've heard this one before: The Flyers nearly got two points, were forced to go to overtime, and everyone left disappointed.

Sound familiar? Because that's becoming the theme of the 2015-16 season for rookie coach Dave Hakstol's team.

Winners of three straight heading into Saturday's matchup with the New York Rangers, the Flyers (23-18-9) were already playing without forward Sean Couturier -- he's out four weeks with a lower-body injury -- and things didn't get any easier when they lost Wayne Simmonds for the game just 10 minutes into the first period.

After getting tangled up with New York defenseman Ryan McDonagh, who hit Simmonds with a crosscheck, the Flyers forward preceded to slash the Rangers captain and punch him in the face -- before dropping the gloves.

Simmonds was not just hit with the 5-minute major but was also assessed a match penalty for intent to injure and ejected from the game. By rule, Simmonds is automatically suspended until the league office reviews the play and decides how to best dispense discipline for the play.

McDonagh was ruled out for the game but was not innocent in the role he played. In fact, the Rangers only got a one-minute power play out of the whole thing, since McDonagh was given two minors, one for slashing and one for high-sticking.

After the game, coach Dave Hakstol told reporters that he was just happy Simmonds "was still standing after the crosscheck he took to the head first." He wouldn't elaborate on whether or not he thought the match penalty was warranted but clearly didn't think his forward's action were unwarranted.

This play did, however, set the tone for the physical, back-and-forth game.

The Flyers took a 1-0 lead into the third period against their Metropolitan Division rival thanks to this goal, which was originally credited to Ryan White and later changed to rookie Shayne Gostisbehere, extending his point streak to seven games. He now has nine goals and 26 points in his 32 games this season.

The Rangers -- second in the division behind Sunday's opponent, the Capitals -- wasted little time tying the game in the third. Chris Krieder scored less than four minutes into the third period.

But White would not be denied.

Just over two minutes later, he beat Henrik Lundquivst short side from the slot thanks to a great pass from Gostisbehere, to give the Flyers a 2-1 lead.

Shayne Gostisbehere to Ryan White and it's 2-1 #Flyers pic.twitter.com/RzafTHYZOB

That shot from White was the Flyers' only one of the third period. The Rangers, on the other hand, finished with 11 shots in the period, the last of which was a backbreaker. With Lundqvist on the bench in favor of an extra attacker, Keith Yandle tied the game at 2-2 with 12.9 seconds left.

For the 19th time this season -- tied for most in the NHL -- the Flyers needed overtime to find a winner. And for the third time, they took it all the way to a shootout with the Rangers (the split their first two).

Sam Gagner and Claude Giroux missed their first two shots while both Mats Zuccarello and Derek Stepan beat Mason to give New York the win.

Mason got the start in net, his third in a row after missing a week-plus with a lingering lower-body injury. He stopped 26 Rangers shot in regulation and overtime, and will likely get the day off tomorrow. That means backup Anthony Stolarz -- called up earlier this week to replace an injured Michal Neuvirth -- will likely make his NHL debut Sunday on the road against the NHL's best team, the Capitals.

Considering that the Rangers are much closer to the Flyers in the standings, however, it was wise to play your better goalie against them. At least you have a realistic chance of catching them. And -- at least until the final 12.9 seconds of the game -- it looked like they were going to climb to within five points of the Rangers for second place in the division.

However, things would have looked -- and felt -- a lot better with a win on Saturday. Now, they have to hope their unproven prospect can hang against Alexander Ovechkin and the Caps on Sunday.