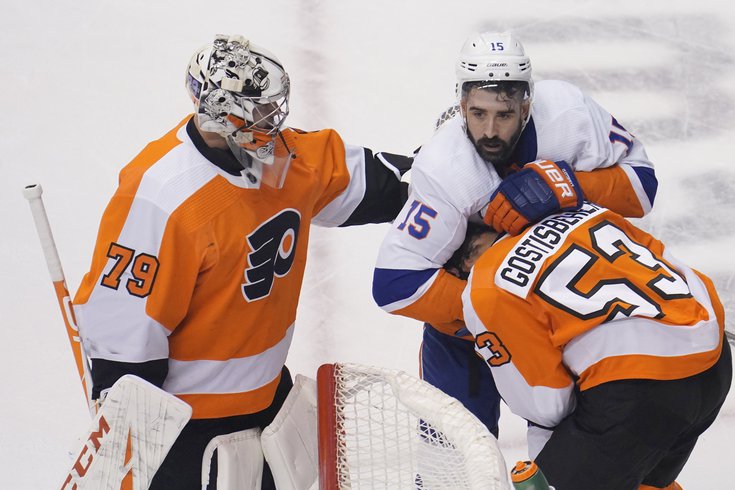 That about sums it up.

From the moment the puck dropped, this was not the start Flyers fans were hoping for in their Eastern Conference semifinal series against the Islanders, as they came out flat, fell behind early, and were unable to climb back despite a flurry of chances in the second and third period.

Now, for the first time this postseason, the Flyers will be playing from behind after falling to New York, 4-0, in Game 1 in Toronto.

Here are three reasons why they came up short and now have to climb out of a 1-0 series deficit.

As we alluded to above, the Flyers once again came out flat — something that apparently carried over from their previous series against the Canadiens.

Just over six minutes into the game, Isles defenseman Andy Greene put his team ahead with his first playoff goal since 2010, which came against — you guessed it — the Flyers. While the Flyers would go on to win that game (and that series), that was not the case on Monday night, as the Flyers dropped to 0-3 in the bubble when their opponent scores the first goal (they are 7-0 when they score first).

The entire first period was dominated by the Islanders, with much of the action taking place in front of Carter Hart, who was stellar in the loss despite what the final score suggests. By the time the period ended, the Flyers had been outshot 15-4 and were lucky to not be down more. And they would've been, had it not been for their young goaltender, who made 14 first-period saves (and 25 in the game). There were several impressive stops, but none better than this:

Yeah, you're going to want to see that from another angle.

The Flyers had so few chances in the period, that it almost looked intentional. Even as I write this, Travis Konecny found the puck just a few feet to the left of the crease, and he he looked at the net, he would've seen half of it was wide open. Instead, just threw it across the slot to no one in particular and that opportunity passed nearly as fast as it materialized.

By the time the first period ended, the Flyers had generated just two shot attempts from their forwards. That's unacceptable, especially against a defensive-minded team that is hard to beat unless you generate enough chances that one finally finds its way through. That was obviously not the case on Monday night.

"The first period was probably the worst period we've had since we've been in the bubble."

Konecny and the rest of the forwards would bounce back in the second, but the team was already playing from behind, and as we've seen not only in this postseason but throughout the regular season, that's not a position from which they've had a lot of success.

For all the lack of opportunities in the first period, the Flyers certainly made up for it in the second period, as they poured on 15 shots of their own, matching the Islanders' total from the first period and turning what was a 15-4 shot deficit after the first into a 3-shot deficit heading into the third.

The problem for the Flyers was that, despite those chances, a few of which were quality, they were unable to find the back of the net.

Semyon Varlamov obviously deserves a fair bit of credit here. He was a wall throughout the entire game, finishing with 29 saves in the shutout, including a flurry in the second period and an absolute beauty in the third.

In the end, it was yet another game without any goals from the Flyers top scorers, something that's become a theme (and a concern) for the Orange and Black in the Toronto bubble.

“Our top end guys are good players. The willingness is there. It’s execution. I expect more from Coots and his line. They’ll have the chance to answer back Wednesday afternoon” pic.twitter.com/Jea4lWndzS

Looking like a completely different team in the second period, however, wasn't enough to lift the Flyers, who had plenty of missed opportunities in this one. And that goes beyond Kevin Hayes fanning on a breakaway in the first, or Claude Giroux hitting the post in the third.

In that second, they were winning a ton more battles behind the net, but whenever they seemed to get the puck in front, there was no one there to finish it. The same with rebounds. Too often there was no one to put it home. And when there was a player waiting, it seemed that the Islanders, not unlike Montreal, had a player of their own there ready to break up the play, put a body on the Flyers player, or block the shot. The Flyers defense, on the other hand, didn't provide Hart the same level of protection (more on that in a second).

You can say it was the Islanders making things tough for Philly, but there were ample chances — they actually tied the Islanders with 29 shots in the end. The Flyers just didn't capitalize.

Hanging Hart out to dry

The first goal you can put on Hart, even if he had trouble seeing it, but he more than made up for that with those highlight saves later in the first.

But then there were the Islanders' first two goals in the third period that put this game out of reach — they'd add an empty-netter when Alain Vigneault decided to pull hart for the extra attacker with seven minutes left in the game.

None of those were on Hart. I mean, what the hell is the young netminder supposed to do with these?

the pass.
the goal.
all of it. 🔥 pic.twitter.com/PJJW1fhZmL

And why don't the Flyers ever seem to have open looks like this?

They'll have to figure out how to start getting some if they hope to even up this series.

“This group has always found a way to respond. We will respond on Wednesday”

“Frustration is not going to help. We’ve got a few players right now that can play a lot better with the puck” pic.twitter.com/SzGmuwbO1Z