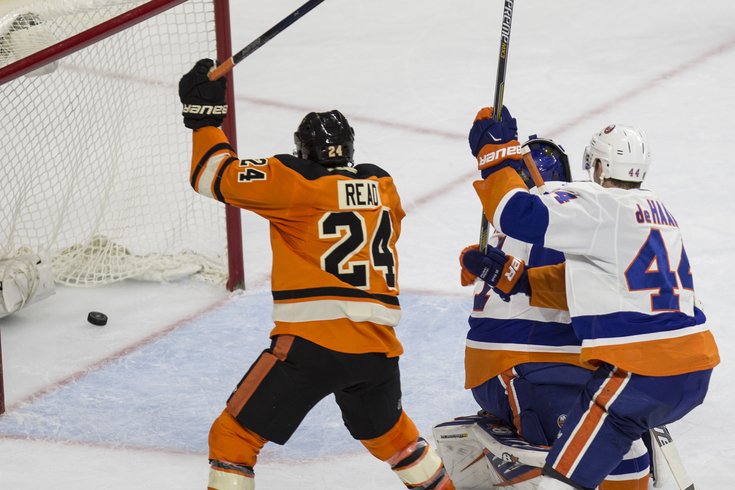 Philadelphia Flyers right wing Matt Read scores a goal during the third period of his team's 4-0 win over the Islanders.

After losing the final three games of their West Coast road trip that concluded one week ago with a 2-1 loss to the Los Angeles Kings, the Philadelphia Flyers have now won three straight thanks to a 4-0 victory over the New York Islanders at the Wells Fargo Center on Saturday.

It was the team’s fifth-straight win at home, where it hasn't lost for more than a calendar month. The Flyers' last loss came on Dec. 8th at the hands of the very same Islanders. Granted, they haven’t played many home games thanks to Disney on Ice taking over their home arena for the final two weeks of December.

The Flyers (18-15-7) dominated for a large portion of the matinee game, holding the Isles to just two (not a typo) first period shots and finished with a 31-20 advantage in that department.

Here’s more on what we saw Saturday afternoon:

•    Matt Read had himself a day. The Flyers center contributed on three of his team's four goals, assisting on the first two and scoring the third. He also finished with a team-high five shots on goal. Here's a look at the one that went in:

READ IT AND WEEP pic.twitter.com/3F0p6CGgXr

It was Read's seventh three-point game of his career. Interesting note: three of those have come against the Islanders.

"I took a game off to realize where my game was," Read said after the win. "I had to get back to playing smart and with speed, and that’s something that maybe I’ve lacked this last little bit. I just kind of focused on skating well out there and supporting my linemates. In Minnesota and tonight, things are kind of going our way and we’re in the offensive zone a lot, and we’re getting chances."

•    What the hell was the second period? The Flyers scored two of their three goals in the second, but it was a non-stop penalty-fest throughout.

In fact, there were seven minor penalties called in the period and more time was spent in shorthanded or 4-on-4 situations than typical five-on-five play. Luckily for the Flyers, they were able to take advantage, scoring once just a few seconds after a penalty expired -- and just a few before another was called -- and added another during a 4-on-4.

After the win, coach Dave Hakstol credited the players who don't play special teams for staying focused and not letting all the penalties steal any of the momentum they gained after a strong -- but scoreless -- first period.

“That comes back to the attitude of the guys that are not part of all those specialty teams, and I thought those guys did a great job for us," Hakstol said. "Staying with it, staying in the game, and just being ready to go back out for the next shift. The Laughton’s full line didn’t get a shift together for probably 10-12 minutes yet they went out at the end of the second period and had a shift and it was a great shift and that carried over into the third.”

•    The Flyers special teams overall, however, didn't have a great day, finishing 0-for-5 on the power play. But I'm not going to beat them up about it because they also didn't surrender a power play goal and wound up winning 4-0. No harm, no foul.

•    Sean Couturier has been on fire. He now has 12 points (6 G, 6 A) in his last 10 games and has gotten on the board in eight of those 10 games. He finished with two of them on against the Isles -- one goal and one assist. His assist on Michael Raffl's second-period goal helped get the scoring started for the Flyers and was just an absolutely beautiful pass.

Couturier also scored the team's final goal in the third period, although the goal was originally credited to Radko Gudas, which would have been his first Flyers goal. His line was a combined plus-six and finished with four points -- Raffl and Couturier each had a goal and an assist.

“As a line we are supporting each other all over the ice," Couturier said after the game. "Starting from our end, we aren’t playing a whole lot of defense because we are supporting each other and breaking out pretty easily. Offensively, I think we are winning a lot of one-on-one battles and creating some space for each other. I’m just happy to be playing with these guys, it’s been going well and hopefully we can keep going.”

•    Evgeny Medvedev scored his third goal of the season in the second period:

I have no idea what the Islanders defense was doing on that one.

•    Goalie Steve Mason wasn't tested often, but when he was, he was more than up for the challenge. His biggest two saves came in the first few minutes of the third period to keep the Flyers lead at 2-0. When it was all said and done, Mason stopped all 20 Islanders shots and picked up his third shutout of the season.

•    Center Jordan Weal was a scratch against the Islanders. He's yet to play for the Flyers since they acquired him, along with a draft pick, from the Kings earlier this week in exchange for Luke Schenn and Vinny Lecavalier. Defenseman Shayne Gostisbehere (lower-body) was also a scratch.

The Flyers are off until Wednesday when they will host the Bruins at 8 p.m. They then host the Rangers next Saturday at 1 p.m. Both those games will be huge for the Flyers, who continue to inch toward a playoff spot in a crowded conference. There are six teams within six points of the final playoff spot and Boston, who is three points ahead of the Flyers, currently holds the top Eastern Conference wild card spot. Meanwhile, the Rangers, six points ahead of the Flyers, are tied with the Islanders for the second and third seeds in the Metropolitan Division.