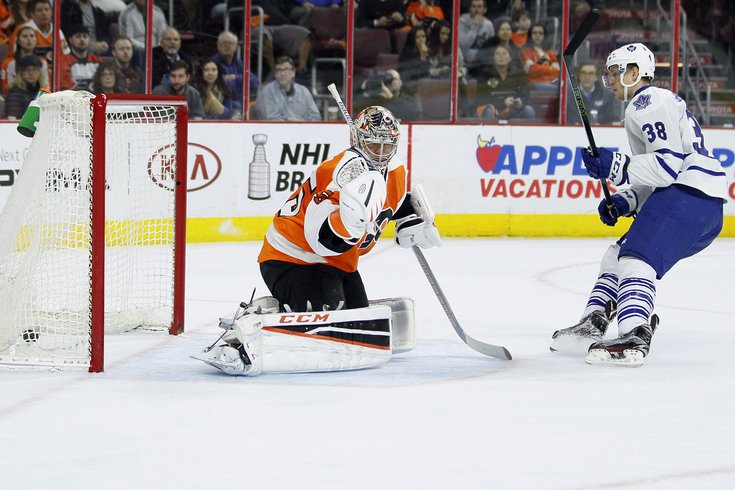 Those wondering if the Philadelphia Flyers were going to come back down to earth -- after playing at an unreal level for several weeks -- found out the hard way Thursday night that it wasn't a question of if but rather of when.

Following a 4-3 overtime loss to the last-place Toronto Maple Leafs at the Wells Fargo Center -- coupled with the Bruins' 5-2 win over the Red Wings -- the Flyers (39-27-14) dropped out of playoff position with just two games remaining in their season. They have now lost three straight games.

And after entering the third period trailing 3-1, the Flyers were lucky to escape with even a point, which was only made possibly by Wayne Simmonds' game-tying goal in the final minute of regulation.

"It's very disappointing," captain Claude Giroux said after the game.

As it currently stands, they're one point behind both Boston and Detroit (93 points) for the final Eastern Conference playoff spot. One of those two will earn the final divisional spot, the other will be trying to hold off the Flyers (92 points) for the second wild card spot.

The good news -- if you want to take any from a home loss to a last-place team -- is that the Flyers can, at most, finish with 96 points, one more than the two teams with which they're fighting over that last playoff spot. To do so, they'll need to beat the Penguins at home on Saturday and then finish the season with a win over the Islanders in New York on Sunday.

In essence, the one point they were able to get against the Leafs means they continue to control their own destiny. And that is enough to keep Giroux and his teammates upbeat heading into the final weekend of the season.

"If you told us two months ago we’d be in this position, we would take it," he said after the game. "We played really good in the second and third period."

"It’s been a lot of fun," Brayden Schenn added about the current playoff race in which his team finds itself. "It almost seems like since the All-Star break we’ve been doing a bit of [scoreboard watching] and pushing towards the playoffs.

"We’ve got two left. We control our own destiny, and we get in the playoffs."

Here are some more observations on the game:

•    Andrew MacDonald quickly went from hero to goat. With the Flyers down 3-1 in the third period, MacDonald scored his first goal of the season to cut the Leafs' lead to one.

In overtime, however, MacDonald was called for a tripping penalty and the Leafs scored on the resulting 4-on-3 power play.

"I just laid down and extended my stick," he said after the game. "I didn’t really make much of a swipe at it. My blade hit the puck and it looked like he was trying to cut hard and he tripped over the blade. I’ve seen those as non calls against us earlier in the year but you know it’s over with and there’s nothing we can do about it.

"We just have to move on and get prepared for Saturday."

•    Wayne Simmonds' 30th goal of the season couldn't have come at a more opportune time. He tied the game up with about 58 seconds left to play, helping secure an all-important point for the Orange and Black. It came on a deflection off a Mark Streit shot, with the other assist going to Shayne Gostisbehere.

However, Simmonds was part of the reason the Flyers were in that 3-1 third-period hole to begin with. You can't try to make passes like this.

Not a great decision by Simmer pic.twitter.com/OgW9ZkomZ0

•    The Flyers outshot the Leafs 44-26 but struggled to get the puck past Jonathan Bernier. And one of the times in which they did, the goal was waved off due to incidental contact between Claude Giroux and Bernier. Giroux made an absolutely ridiculous play to through the Leafs defense but appeared to be tripped up before the puck wound up in the back of the net.

Giroux muscles his way in, looked to be tripped. No goal. pic.twitter.com/rnxfPB4FSF

Dave Hakstol used his challenge, but the call stood.

•   That may be part of the reason the Flyers players were so livid following Jake Gardiner's OT winner for the Leafs. Not only was the tripping call that preceded the goal somewhat questionable at that stage of the game, but they might have felt goalie Steve Mason was interfered with.

It counts. Flyers now need to win out. pic.twitter.com/8pkdl47AAP

It went to review, but again the refs let the call on the ice stand, and rightfully so. Game. Over.

"I think it’s goalie interference on the winning goal, but you know, that’s a moot point at this point in time," Hakstol said after the game.

His players, however, were a little less subtle about their feelings.

•    The Flyers were 0-for-4 on the power play, including a four-minute double minor early in the second period. They had eight shots in their eight minutes with the man advantage, but again, they didn't come away with any goals. Their PK unit killed the only 5-on-4 penalty go the night -- Voracek for holding in the second period -- but allowed the Leafs to score on their only other power play of the night, the 4-on-3 game winner in OT.

•    Squandering that four-minute double minor really hurt the Flyers. Trailing 2-0 to start the second period, the Flyers finally got on board just 29 seconds into the second period thanks to this beautiful setup by Sean Couturier and finish by Brayden Schenn (26).

For the first time all night, they had momentum. And they got even more when Tobias Lindberg was sent to the box less than a minute later. The chances were there, but the Flyers just couldn't finish.

•    As for Mason, he may have only stopped 22 of 26 Toronto shots, but two of the Leafs goals came on breakaways, not to mention the 4-on-3 winner. You already saw one of the breakaways, here's the other...

Yeah, not his fault.

The Flyers host the Penguins on Saturday at 3 p.m. Luckily, Pittsburgh has already clinched and basically has nothing for which to play. Still, the Flyers know they need to come out sharper than they were against the Leafs.

"We created a ton of chances [late in the game after a bad first period] and tied it up, so that is a positive," Mark Streit said of his team's ability to overcome a slow start on Thursday. "That's how we need to start the next game against Pittsburgh on Saturday."

On Sunday, the Flyers take on the Islanders, who are already secured of a playoff spot and by that time may be locked into their position as well.

Getting four points means they're in. After that, a lot depends on what happens with the Bruins (vs. Senators) and Red Wings (at Rangers) on Saturday.