Just like his nickname would lead you to believe, Shayne Gostisbehere was nowhere to be found. When the Philadelphia Flyers took the ice on Tuesday morning at Skate Zone in Voorhees, everyone was present and accounted for except for the Calder candidate with great stats (46 points in 64 games) that still underrate his impact on the team.

Turns out, it was a maintenance day for “Ghost.” When Dave Hakstol was asked whether he was concerned by Gostisibehere’s absence — The 23-year-old rookie did log 21 minutes of ice time in Sunday’s meaningless win over the Islanders — he was succinct.

Even with his absence at practice, Gostisbehere should prove to be a key figure in a crucial element of the series with the No. 1 Washington Capitals: the special teams battle between the Flyers’ power play (18.9%, 11th) and the Caps’ penalty kill (85.1%, 3rd). One way that the Orange and Black can keep up with the second-highest scoring team in the NHL is by doing serious damage with the man advantage, something they absolutely posses the firepower to do.

Like a three-point sniper in basketball, Gostisbehere (8 PPG) has a certain gravity to him on the power play with his ability to shoot the puck from the point both hard and accurately. That can open some things up for some very capable teammates on the first power-play unit.

“I think obviously teams keyed in on him, but when you key in on one player, you open something else up,” Wayne Simmonds (13 PPG) said. “That’s been a great thing. Obviously when he’s on up top, he’s lights out, he’s getting everything through. It’s really nice to watch.”

“But if they’re going to clamp down on him, you’ve got G on the half wall, you got Jakey on the other half wall, Schenner in the middle, and me down low,” he added. “So we like to think we have more than one option and that if they try to take one away, we can use the other ones.”

Coming into the series against Washington, the Flyers’ top power-play unit struggled over the past week, going 0-for-13 with the man advantage before Sunday’s game that both Simmonds and Claude Giroux didn’t play in. The flip will have to be switched.

As the season went along, teams started to make adjustments with how Gostisbehere and Claude Giroux worked on the power play. Even with some film study, the Flyers might not exactly know what is coming their way at the beginning of the series.

“Teams defend differently each and every night,” Hakstol said. “There’s no secrets in this league. There’s so much video and pre-scout that’s done so whether or not it’s particular to one player on our power play or not, everybody defends a little bit differently.”

One of the players that the Flyers badly need to get going is Jake Voracek, who saw his goal total on the power play drop from 11 in 2014-15 to just one this year. Voracek had terrible shooting luck early in the season, and he also dealt with injuries as we have moved along. 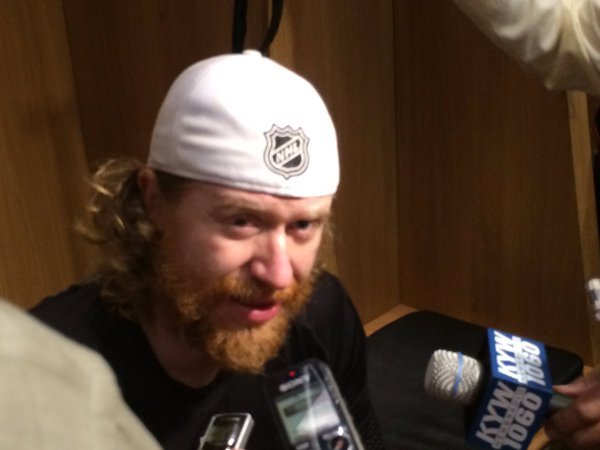 Voracek, whose hands and timing have looked rusty at times since missing nine games with a foot injury in March, said there is no reason for both he and the power play not to produce against the Caps.

“Last three games of the season, I think we’ve been pretty good,” Voracek said. “We’ve moved the puck very well, and even if we didn’t score, I think we know what we want from each other. And that’s really important, we always talk about it.”

Simmonds couldn’t lie when he was asked if it was difficult to refocus, one day after the only man who owned the Philadelphia Flyers passed away.

“A little bit," Simmonds said. "Obviously anytime something like that happens, it’s really unfortunate. “You spend the whole day thinking about it. What Mr. Snider meant to all of Philadelphia, I just think that it kind of puts a little bit of extra pep in our step, a little extra motivation.”

“We now know that we have an angel looking down on us and we got to play our butts off for him, make him proud.”

The Flyers were glad to get back to work, but that won’t remove any of Monday’s emotions. They are planning to wear a patch on their uniforms honoring Snider in the playoffs.

“That certainly doesn’t change anybody's feelings or emotions on a tough day yesterday,” Hakstol said of the practice.

Flyers ‘in the mix’ for Caggiula

Finally, a report from our friend Frank Seravalli:

Sounds like front runners for Frozen Four MOP Drake Caggiula are (in no order): CHI, EDM, PHI, VAN and OTT. I think BUF is in the mix, too.

What does Drake Caggiula (51 points in 39 games) already have in common with the Flyers? He’s at the University of North Dakota, where he spent his first three years playing for Dave Hakstol.