For some reason, P.K. Subban hears boos every time he touches the puck in Philly. But after the Habs lost 4-2 to the Flyers on Tuesday night, the All-Star defenseman was criticizing one of the Flyers instead of the fans.

First, the video evidence (GIFs via Sons of Penn):

Subban was talking about Radko Gudas, who as you can see, he introduced himself to earlier in the game. For the low hit on Lucas Lessio in the third period, Gudas received a five-minute major penalty for clipping and a game misconduct. He took the news very well:

I've never seen anyone as mad as Radko Gudas walking back to the dressing room. Snapped his stick in two places. Thankfully no one was near

While the Flyers didn’t agree with the call on the ice (or at least the severity of the penalty), Subban thought the hit was intentional and low. He had some pretty harsh words for Gudas, as well.

“I don’t know the player personally but it seems like when you’re on the ice with him he’s the type of guy who will do stuff like that,” Subban said. “So, I mean I don’t think it’s anything that reflects on their team, they have guys that play the game hard and finish their checks, which you need to respect. But I don’t respect guys that do hits like that. You know what you’re doing in that situation, and I thought it was low.”

Gudas’ mission is to seek and destroy while out on the ice. Despite only playing 42 games thus far — He was suspended three games for a December hit in Ottawa — the 25-year-old Czech ranks fourth in NHL with 200 hits.

They Flyers play up in Montreal in a few weeks. Gudas’ night might be pretty interesting.

For the past few weeks, “games in hand” has been all the rage when trying to describe the Flyers’ playoff position. Well, now it’s time for the Orange and Black to catch up. 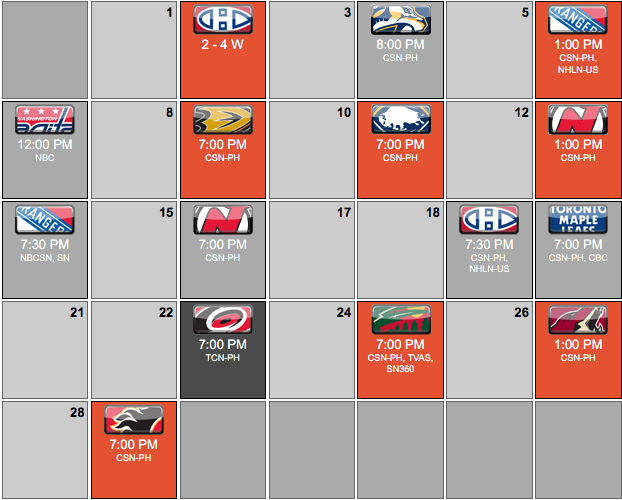 (I just figured out that it’s a Leap Year. Happy Leap Year, everyone.)

That’s a lot of hockey, 15 games in 28 days to be exact. Shayne Gostisbehere said after the game, “This is where we make our money.” Dave Hasktol is giving his team an optional skate before they fly to Nashville to start a very difficult three-game stretch on Thursday.

Hakstol isn’t anticipating many opportunities to practice over the next month.

“It’s about being ready to play on game day doing whatever that takes physically and mentally,” Hakstol said. “And we got to do as good a job as we can [at] being fresh physically and allowing ourselves to be fresh mentally.”
In the past, the Sixers were the Wells Fargo Center tenant associated with not liking practice.

“Sometimes it’s better when you play every other day,” Jake Voracek said. “I don’t like practice as much, I’d rather play the games.”

As it turns out, Flyers-Penguins in South Philly won’t end the regular season. Bummer. Instead, the rescheduled game with the New York Islanders will take place on Sunday, April 10th at terrible hockey arena Barclays Center. Puck will drop at 7:00 PM.

Not only does this game extend the Flyers’ season by a day, but also the NHL’s regular season.