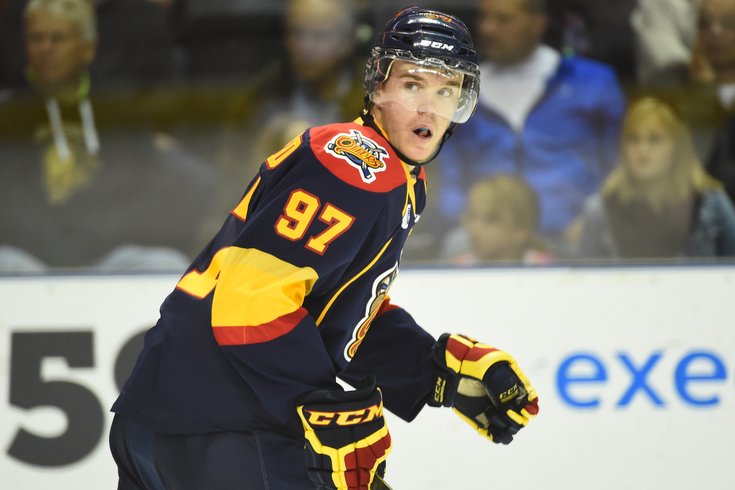 Connor McDavid of the Erie Otters.

Landing a generational talent in Connor McDavid would've been a huge boon to the Flyers. If the 18-year-old center turns out as good in the NHL as pretty much every hockey writer in the know expects, the organization would've already been way ahead of the curve for the next decade. As the general manager said, landing the top pick would've been huge.

"Wouldn't that be sweet," Ron Hextall said the other day of winning the NHL Draft Lottery. " Well obviously it would be huge.  What do they say, prepare for the worst and hope for the best?  That’s where I’m at.  It would be great."

Like Hextall, we all knew the slim odds. With the league's seventh-worst record, the Flyers only possessed a 6.5 percent chance at the first overall pick in the 2015 NHL Draft, and the ping-pong balls didn't go their way.

You could very well argue that from a competitive standpoint, the Flyers prefer how the lottery actually shook out if they couldn't win First and foremost, a team that was behind them in the standings (and ahead in lottery odds) received the top pick, so they didn't get bumped back a spot. Hextall and the front office will pick seventh. It's also a Western Conference team that came out on top, so the Flyers won't have to deal with McDavid on a consistent basis like they've had to with Sidney Crosby for the past decade.

The Edmonton Oilers won the lottery with the third-best odds (11.5 percent). Judging by his reaction, McDavid would've been happier going anywhere else (like Philadelphia, for instance) besides Edmonton. I joked on Twitter that it was very similar to Joel Embiid at last year's draft, except there wasn't a misleading delay in the television feed:

This is Edmonton's fourth top pick in six years, and for that reason, hockey fans were pretty much unanimously disappointed that they'll get McDavid. It reminded me quite a bit of the Cleveland Cavaliers winning the NBA Draft Lottery last season, when NBA fans were disappointed that a consistently incompetent franchise was rewarded with the top pick. There were much better situations for McDavid to step into, which Sean McIndoe made perfectly clear on Grantland. At least the NHL doesn't have to deal with any conspiracy theories, I guess.