Several experiments show that bees can detect a range of stimuli that help them determine where to find the best pollen and nectar. 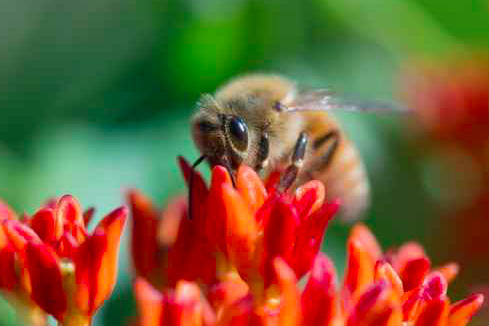 As the spring season approaches full bloom, legions of bees are arriving in full force to speed the process along. If you've ever wondered whether the one bee that seems to be chasing you around is acting very deliberately, your hunch may be correct.

Felicity Muth, a postdoctoral animal cognition researcher at the University of Nevada, Reno, has been focused on expanding our understanding of bee cognition, which goes far beyond mindless buzzing around.

Muth's work seeks to build on the findings of Karl von Frisch, who won the Nobel Prize for his research on honey bees' color vision and waggle dance communication.

As Muth explains in a two-part blog for Scientific American, bees operate as generalists when it comes to sipping nectar and collecting pollen from flowers. The all-female worker bees use associative learning to distinguish which flowers have the best pollen and nectar.

This can happen when she visits a single type of flower, for example if she lands on a lavender flower and finds some really good nectar, she will be then more likely to seek out another lavender flower in the future.

Von Frisch's experiments used a series of colored cards with sugar water on them. Most of the cards were different shades of grey and one was a bold color, such as blue. When the honey bees passed over the grey shades to opt for the blue, it proved that they had the ability to detect hues. Using similar experimental principles, other scientists went on to prove that bees could learn to select flowers based on their shape, size, temperature, pattern, and electric field.

Muth goes on to describe several other advanced experiments that demonstrate the cognitive ability of honey bees and bumble bees to form abstract concepts, which give them behavioral flexibility. They might understand that certain conditions in flowers are true only at certain times of day, so that their notions of 'sameness' and 'difference' must account for multiple factors influencing a general rule they have learned.

As for the question of why honey bees become aggressive, many of the reasons may have less to do with the presence of people than with the environmental conditions affecting their hives. A missing queen bee, a dearth of nectar, and high humidity can all put bees in a cranky mood. Usually, this leads to fighting amongst different hives, but if a person happens to intrude on a hive, it can set in motion a chain of attackers who will sacrifice themselves to protect the colony.

If a honey bee is out foraging for nectar, it's rarely a threat, but if you're allergic and don't want end up in hives, it's a good idea to stay away from bee hives.