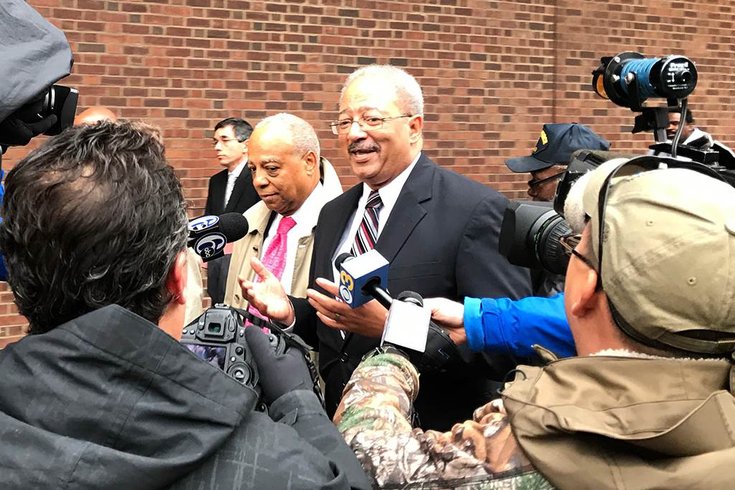 Former U.S. Rep. Chaka Fattah leaves the courthouse after his sentencing by a federal judge on Monday morning.

Former Congressman Chaka Fattah, convicted in June on corruption charges, was sentenced to 10 years in federal prison on Monday, a punishment that fell short of the recommendations of federal prosecutors.

Fattah, 60, was found guilty of orchestrating several fraud schemes, including using federal funds to repay an illegal $1 million loan from his 2007 mayoral campaign.

U.S. District Judge Harvey Bartle III handed down the sentence, which also requires Fattah to make restitution of $614,500 and serve three years of supervised release. He is expected to appeal the conviction.

The Philadelphia politician, a Democrat, was given 10-year sentences on 17 of the 18 counts, with a 5-year sentence on the last count. All sentences will be served concurrently.

Fattah must surrender on January 25.

In delivering his sentence, Bartle acknowledged the good Fattah did as a public servant for 37 years, including his time as a state lawmaker. But, he said, that helped make the "depth and duration" of Fattah's criminal conduct "so astonishing."

"It is appropriate that that a sentence here be crafted to serve as a warning to others considering taking the path that you did," the judge told Fattah.

Outside the courthouse after the sentencing, Fattah thanked his family and legal team for their support, but declined to comment on the 10-year term.

Inside the courtroom, Fattah had addressed Bartle after 10 witnesses urged the judge to consider the totality of Fattah's career in determining a sentence.

Fattah said he regretted decisions that he had made, saying his conviction was "the most disappointing event" of his life. He urged the judge to have leniency on his co-defendants and said he was grateful for the support of his legal team, family and supporters.

"I have regrets for the decisions that I've made," Fattah told the judge. "My words of regret are as real as my words of gratefulness."

Fattah's wife, former longtime NBC10 anchor Renee Chenault-Fattah, left the courthouse without talking to the media. Chenault-Fattah, who resigned after she was mentioned in the indictment as a participant in the bribery scheme, was never charged and has denied wrongdoing.

Though Chaka Fattah's sentence fell short of the 17 to 22 years suggested by prosecutors, U.S. Attorney Zane David Memeger called it a significant punishment that sends a message that public corruption will not be tolerated.

"Ten years is a very long time to be sitting in federal prison," Memeger said. "Unlike the state system, 10 years means 10 years. ... It's a long fall for Chaka Fattah." 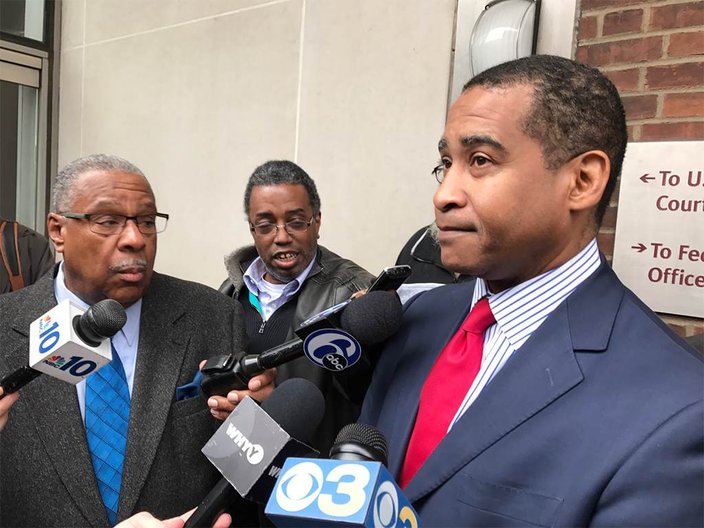 Ten associates of Fattah — ranging from constitutents who never met him to his brother-in-law — spent the better part of an hour pleading for Bartle to deliver a lenient sentence.

They included Joseph Quinones, a constituent whom Fattah had helped at varying points since he left the Navy 26 years ago. Quinones urged Bartle to focus on Fattah's career of service, labeling his transgressions a "hiccup," "snapshot" and a "moment in time."

Afterward, Quinones said the sentence was "in the right direction, relative to the full measure of the congressman's character and history of service."

"As I said in court, he still has work left undone," Quinones said. "We need him to be able to re-enter society as soon as possible so that he can continue to play it forth, relative to the lives that he has yet to touch."

The city's Republican Party took offense at the Democratic supporters who lined up to address Bartle, calling their pleas for leniency an "embarassment."

"The voters of the Second Congressional District are owed significant recompense, not just from the money siphoned away by their former congressman through decades of poor representation, but from his establishment enablers as well," Chairman Joe DeFelice wrote in a statement.

Prosecutors had urged Bartle to sentence Fattah within a range of 17 to 22 years in prison, arguing the recommendation fell in line with sentences given to politicians recently convicted of similar offenses.

"Fattah understood the power and trust given to elected officials and that corruption benefits the few at the expense of the many," Special Assistant U.S. Attorney Eric Gibson wrote in a court memo filed last week. "He chose to violate the trust of his constituents and the taxpayers to line his pockets and advance his personal and professional goals at their expense."

Fattah's attorneys suggested he receive a smaller punishment, requesting a prison sentence between 11 and 14 years. Yet, they encouraged Bartle to consider an even lighter sentence, noting Fattah's decades of public service.

"As a legislator, he made the education of disadvantaged youth his life's work," defense attorney Mark Lee wrote in a memo. "And as a mentor and role model, Chaka Fattah inspired countless young men and women to service and self-improvement."

A jury found Fattah guilty of all 22 charges against him, including racketeering, bribery, money laundering and conspiracy. But Bartle later acquitted him on four counts of bank and mail fraud.

Fattah resigned two days after his June 21 conviction, ending a 21-year career in the House of Representatives. After being indicted in July 2015, he had stepped down as the highest-ranking Democrat on an Appropriations Committee panel that oversees funding for the Justice Department.

Democrat Dwight Evans won a special election on Nov. 8 to fulfill Fattah's term in the 114th Congress. Evans, a longtime state legislator, defeated Fattah during the primary election last April and will return to Washington when the 115th Congress convenes next month.

In addition to finding Fattah guilty of stealing funds from an education nonprofit to repay an illegal campaign loan, jurors found Fattah guilty of misdirecting federal grants to a fake nonprofit so he could pay a political strategist.

They also found Fattah guilty of using campaign funding to cover the college debts of his son, Chaka "Chip" Fattah Jr., who is serving a five-year prison sentence for fraud, and accepting more than $27,000 in bribes from a lobbyist, Herbert Vederman, trying to gain a White House appointment.

Bartle also sentenced Vederman on Monday to two years in prison and ordered him to pay a $50,000 fine.