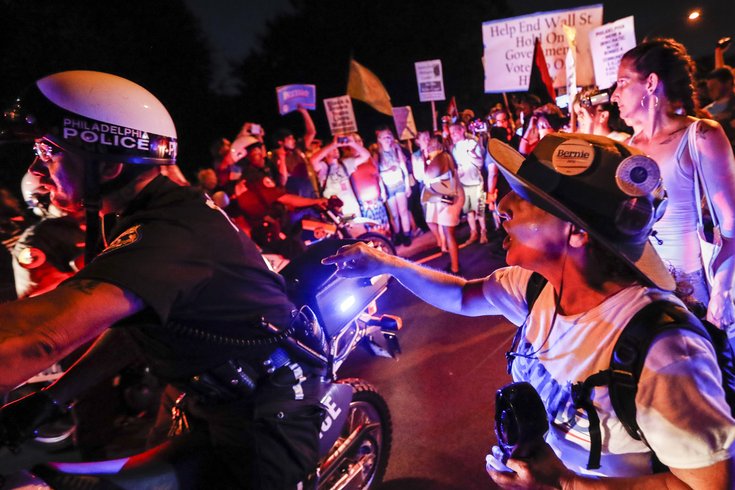 Protesters yell at police as they march south on Broad Street during a protest in Philadelphia, Tuesday, July 26, 2016, during the second day of the Democratic National Convention.

Four of 11 protesters, who attempted to enter a restricted area during the Democratic National Convention, have been cleared of criminal charges by federal prosecutors, NewsWorks has reported.

The four protestors were arrested on the second night of the convention, July 27, after climbing a security fence outside the Wells Fargo Center. There was a fifth protestor who scaled the fence, but was never detained. Seven others were arrested the following night, July 28, when they were able to break through the outer fence set up outside the arena.

The seven remaining protesters still face federal charges, but civil rights attorney Paul Hetznecker, who is representing some of them, hopes their cases will reach the same conclusion.

"With respect to the other seven,” Hetznecker said to NewsWorks, “we are hopeful that the government will make the same decision regarding the second group that [was] arrested by the federal government the second night."

The 11 protesters were taken into custody under federal law. None of the first four arrested were from Philadelphia.

The Philadelphia Police Department handed out more than 100 citations during the convention, but its officers made no arrests in part because of legislation adopted by the city before the event -- which reduced the penalty for crimes like disorderly conduct to $50 tickets.