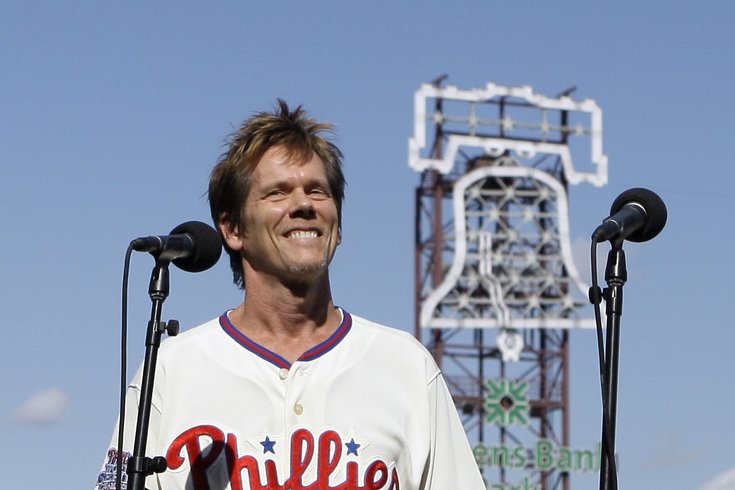 Kevin Bacon, of The Bacon Brothers band, smiles after singing the national anthem before the start of Game 1 of the National League Division Series between the Philadelphia Phillies and Colorado Rockies, Wednesday, Oct. 7, 2009, in Philadelphia.

Dec. 30 is National Bacon Day, and instead of celebrating the food (a Phillies minor league team has you covered there), let's take some time to celebrate one of Philadelphia's favorite sons: Kevin Bacon. Born and raised in Philly, he's had a legendary career in film and music. And just like the food, we could all use a little more Bacon in our lives. So here are four interesting facts about the actor's life and career:

He loves parks and has worked to improve them in Philly

Kevin Bacon's father is famous urban planner Edmund Bacon, who served as the executive director of the Philadelphia City Planning Commission from 1949 to 1970 and is referred to as the "father of modern Philadelphia." Kevin has taken his father's torch, as this past February, The Bacon Brothers — a band consisting of Kevin and his brother Michael — played a benefit concert for the still-in-progress Viaduct Rail Park. In 2015, the brothers also helped promote the Better Philadelphia Challenge, which challenges participants to help redesign city neighborhoods.

Kevin explained in an interview with CBSPhilly earlier this year how his father's legacy impacted his life:

“You can’t grow up with that sort of stuff being around and him talking about it without kind of picking some of that up. As a result I really do, I love cities and I love to see them change in shape,” he says. “The main idea that he had was that people need to experience the city together and out in it.”

He initially hated the Six Degrees of Kevin Bacon

In 1994, three students at Albright College created the game Six Degrees of Kevin Bacon, which revolves around the idea that Bacon can be connected to any celebrity in just a few steps based on the movies they have in common. Bacon has come to embrace the game, meeting the creators during an appearance on "The Daily Show" and eventually launching a charity based on the game. But at first, Bacon was "horrified" and eventually "annoyed" by the game. Per a 2014 interview with BuzzFeed:

“I thought it was a joke at my expense. I thought somebody was trying to pick the biggest loser they could find and joke about the fact I could be connected to Laurence Olivier in two steps. When you fight so hard and put your sweat and blood into trying to have your work speak for itself, I found it belittling. I mean, do you want to be the guy with a game named after you or be the one with 18 Oscar nominations?”

You probably remember the 2010 commercial for Google TV's Logitech device, starring Kevin Bacon as Kevin Bacon's biggest fan. Google TV never took off, but the famous ad was a hit. In a 2010 interview with Entertainment Weekly, Bacon explained that he took extra care not to make it seem like he was making fun of any of his big fans:

"I know people have mentioned that it’s a little creepy, but I don’t find him creepy. I worked to make him sweet and genuine. In a way, I feel like there’s a certain responsibility to do that because the last thing I would want to do is make fun of a fan. [Chuckles] Because that’s my bread and butter, right?"

After his film debut, he went back to waiting tables

Bacon's first film role was as Chip Diller in the frat house comedy classic "National Lampoon's Animal House," which premiered in 1978. While the movie was a success, Bacon's career didn't take off the way he thought it would. Per an interview with Deadline:

"When the movie came out I was still a waiter — I had to ask for the night off in order to go to the premiere. So that was a huge movie in my life, but it didn’t change my life, really, other than I thought, 'OK, now I’ve actually worked and got paid to be an actor.' But it certainly didn’t put me on the map. It was still a struggle to try and get an agent. It was still a struggle to make ends meet; I ended up waiting tables for quite a few years after the movie came out."