Four takeaways from Villanova advancing to the Final Four

Is it Final Four or bust for the Villanova Wildcats? In Jay Wright’s first year making it out of the first weekend since 2009, the Wildcats advanced to their first Final Four… since 2009. Here are a few things I observed from Saturday night’s Elite 8 game:

The other night, we wrote that the Wildcats’ box score could’ve hung in the Louvre. This ain’t that: 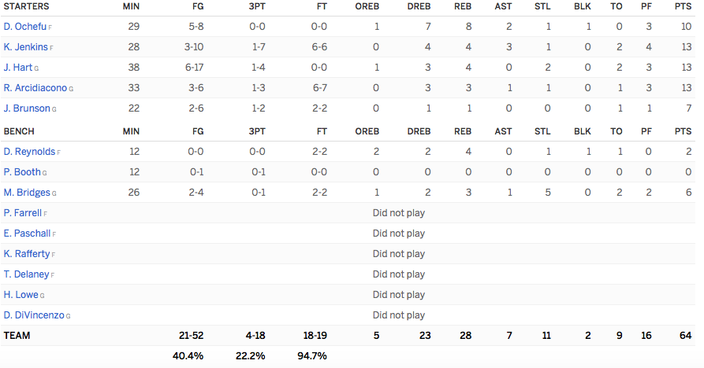 Knocking off the top team in the country with those shooting percentages says more about how good Villanova is than any of the previous three blowouts. We knew they could win playing the beautiful game, but the WIldcats proved they can win ugly against Kansas.

“We knew we weren’t shooting the ball well, but the backbone of our program is just defend, rebound, and play hard together,” Ryan Arcidiacono told reporters in Louisville. “We started off a little slow, but the last 35 minutes of the game or so was where we really turned it up and made it an ugly street fight.”

Bridges is blossoming into quite a player for Wright. We have already seen his long arms cause havoc at the top of the Wildcats’ patented 1-2-2 press, and as ‘Nova keeps advancing, Wright is realizing more and more that the 6’7” redshirt freshman needs to play heavier minutes:

“A decision you have to make there at the end of the game, ‘Do we get into our press and try to get a turnover or slow them up knowing that [Frank] Mason is so good that he can split it and get them an easy shot?’” Wright told reporters when asked about Bridges.

He did call for the press, and Bridges made two critical steals late in the game. Bridges was also part of a rotation that limited All-American (I assume) Perry Ellis to four points on 1-5 shooting.

Could Villanova’s new defensive stopper be matched up against Buddy Hield next weekend? My guess is that Bridges will be in that role.

Those second-round exit jokes are finished for a couple years, and Wright is just happy for his players.

“Coaching is a lot like parenting, you just believe in your guys so much and you’re telling them how great they can be,” Wright told reporters.

“It’s the greatest feeling in the world to see these guys get to that point where everyone else sees they’re as good as we see they can be,” he added.

4. Devonte Graham’s fifth foul can be looked at a few different ways, but it should have been a no-call

Diving for the ball is now a foul in the NCAA pic.twitter.com/anHlY3x94P

Josh Hart didn’t necessarily do anything wrong, but he also didn’t dive on the floor like Graham did. I thought Graham got to the 50/50 ball first (ever so slightly) without fouling Hart, and then his momentum took out the ‘Nova star’s legs out. In that case, I think you just play on.

I certainly don’t understand what the officials are talking about here. The ball was clearly poked free by Mikal Bridges, and Graham lost possession of the ball:

That call basically sealed Kansas’ fate, and overall, it felt like the officials missed a good amount of decisions both ways. Kris Jenkins’ third foul was a phantom whistle against ‘Nova, for instance.