So here's how to cool off 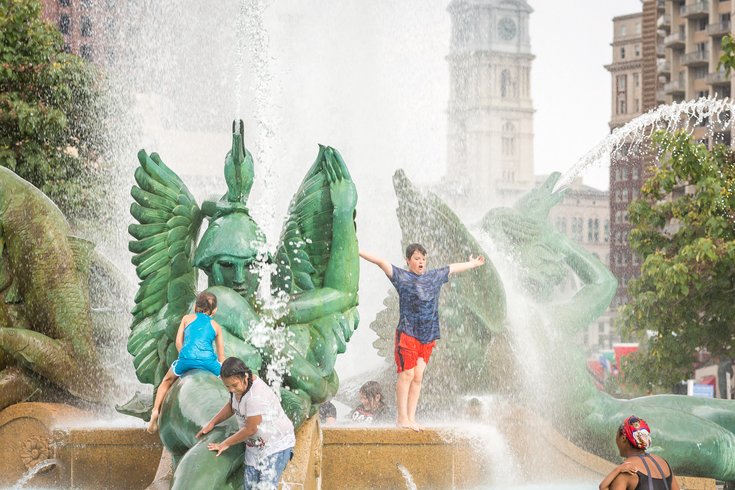 People in Logan Square play in the Swann Memorial Fountain as the heat index inched towards 110 degrees on Tuesday, July 3, 2018.

A sweaty reality is sinking in and the sweet stench of truth – mixed with the smell of your block's overheated garbage – is that there may be no time for grilling or backyard baseball this Fourth of July holiday.

It's just too darn hot.

The city declared a Heat Health Emergency on Tuesday morning due to abnormal temperatures and humidity. This past week, all-time heat records were set all over the world. Denver and Vermont reached their highest recorded temperatures and Pakistan posted the hottest temperature ever observed on Earth, at 122.4 degrees.

The weather is even slowing down U.S. stock trading.

So, we thought we'd do our part today in cooling things off.

First, Philly has a ton of public pools and no matter what neighborhood you live in, I can pretty much guarantee there is one within a few blocks — or a short bus ride. See for yourself.

If you're not a pool person or your little one isn't old enough to swim, there are a few other options, too. (No, dumpster pools are not actually one of them.) Here's a map of all the spraygrounds in the city.

The Free Library also has set up official "cooling centers" all day on Tuesday at select library locations for people who need a breath of icy, artificial air. There are additional library cooling centers that will be open July Fourth. That list can be found here.

This heatwave is serious! Beat the heat at a Free Library cooling center in your area: https://t.co/fGpWGRIuU9 pic.twitter.com/9iXoZ2SZSR

The city has put out a quick-hit map of pools, spraygrounds and cooling centers if you want to see which facility is closest to your residence or workplace.

The Office of Homeless Services declared a "Code Red" on Tuesday, which means temperatures are 10 degrees above normal and unsafe for the homeless and pets.

It's a scorcher out here and the code red is in effect for Philadelphia. During a Code Red, City of Philadelphia Office of Homeless Services increases outreach to keep homeless Philadelphians safe. Call 215-232-1984 to request outreach ➡️ https://t.co/5RaqLskCjP pic.twitter.com/PnRD6vyQjx

If you have a concern for a homeless individual, call the OHS Street Outreach team at (215) 232-1984 or the Philadelphia Fire EMS at 911 if there is a medical emergency.

All dogs must have shade to protect them from the sun. If you do not provide your dog shade, you could face a fine of $500 or more. To report a dog left outdoors in very hot weather, call the Animal Care & Control Team (ACCTPhilly) at (267) 385-3800.

On Independence Day, the city is slated to host a bunch of outdoors events — a parade, concert, ceremonies, firework shows, festivals.

The Free Library's Brews and Views roof-top happy hour special, was cancelled on Tuesday afternoon. At 3 p.m. on Tuesday, the Historic District Block Party was cut short due to heavy rain. At 6:45 p.m., The Philly POPS Independence Concert on Independence Mall was also canceled due to inclement weather.

⛈Weather Update⛈ Due to the storm, today’s @July4thPhilly Historic District Block Party has ended early and the @ThePhillyPops concert tonight has been cancelled.

Due to the threat of inclement weather, tonight's #BrewsAndViewsPHL is cancelled. 😭 https://t.co/og6JKaLzMe

Some good news: Temperatures are expected to drop off as the week progresses, but take precautions if you're partaking in the festivities on Wednesday.

The Office of Homeless Services has prepared tips for avoiding heat exhaustion and stroke.

High temperatures through the end of the week are expected to be in the upper 80s to around 90°. Humidity levels will still be on the high side, but the heat won't be nearly as oppressive. A cold front late Friday will bring drier and more comfortable air for the weekend. Enjoy!

Rumor has it, we're going to receive some showers tonight that could cool things off.

We are currently watching some slow moving isolated/scattered storms develop. This will continue through the afternoon/evening. These storms will be capable of producing heavy rain and gusty winds.
If you experience any severe weather, and it is safe to do so, please let us know!