Francis does Philly in Popemoji app 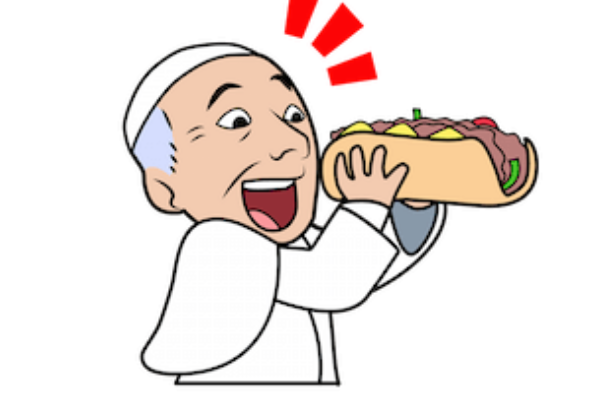 Pope Francis opens wide to bite into a cheeseteak in new Popemoji app.

The arrival of the pope in Philadelphia is just around the corner, and with all of the promotional memorabilia flooding the market, it was really only a matter of time before Pope Francis emojis became available to help illustrate your text threads.

Naturally, a Pope Francis emoji set would not be complete without a cheesesteak, Love Park and the Liberty Bell, all of which the pope does with requisite gusto.

In an interview with Mashable, Kathleen Hessert, founder of Sports Media Creation, the company that oversaw the app's creation, says that the app is a lighthearted way to reflect Pope Francis' more accessible approach to leading the Catholic Church.

"We look at the whole initiative of connecting the church better with young people and young people with the church as fandom. If he was a very stoic kind of pope like we’ve seen so many times in the past, it probably wouldn’t work. Pope Francis is a down-to-earth guy."

According to Hessert, the app is part of a promotional push ahead of the pope's visit to the United States, but it could be expanded in the future if it proves to be popular.